Special education leader vows to advocate for students who cannot speak for themselves. 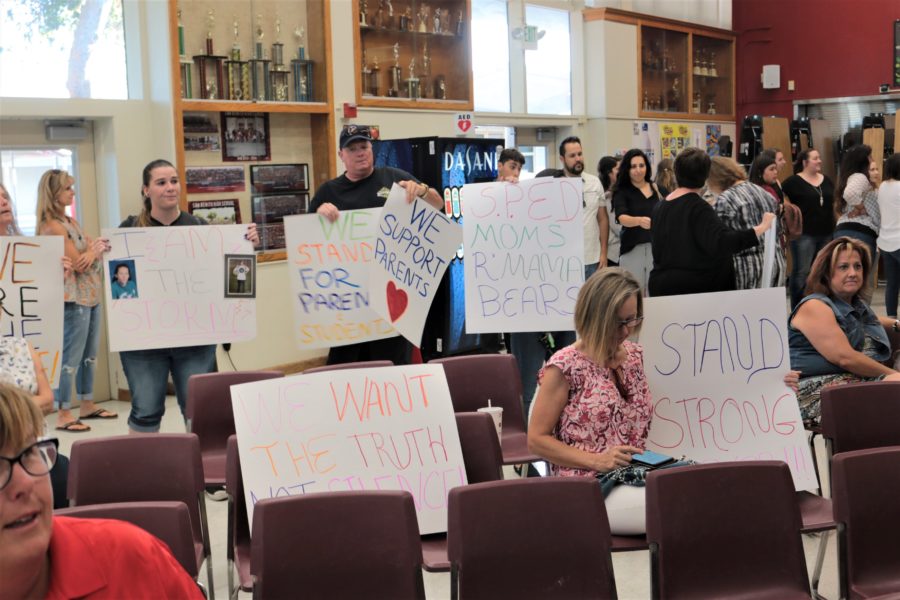 Parents and educators held signs in silence at the SBHS board meeting on Aug. 14 as speakers spoke of their concerns about alleged incidents in a special ed classroom. Photo by John Chadwell.

Former instructional aide Courtney Evans said retaliation against those who speak out is common at the high school. Photo by John Chadwell.

Parent Susan Villa said she trusts special ed teachers, but was sad about the negative attention being directed at them and herself on social media. Photo by John Chadwell.

Ann Pollock said only after learning about what allegedly happened in the class did her daughter's behavior make sense. Photo by John Chadwell.
×

Parents, teachers and advocates went before the San Benito High School Board of Trustees on Aug. 14 to express their sorrow and frustrations about ongoing allegations of inappropriate conduct in a special education classroom, as well as lack of communication from the administration. Superintendent Shawn Tennenbaum and other school administrators recently spoke with BenitoLink about their investigations into the allegations.

Special Education Chair Joan Burley, who has taught at SBHS since 2007 and has an autistic son, spoke through tears for the group of educators and paraprofessionals standing in the front row. She said she wanted people to know that despite the negative way their department has been portrayed on social media, they are there for all students and her goal is for students to speak up for themselves.

“If they can’t, then I will stand beside them and advocate for them,” Burley said. “I realized this last weekend I have not done that. My silence is not because I don’t care or that I agree with what is being said.”

Burley said she realized that when the students come back to school they might ask why she did not advocate for them or the special education department. She said her daughter and daughter-in-law, who are also instructors in the school’s special education department, needed her to take a stand on the impact of the ongoing dialogue regarding the students.

“All the anxiety and negativity has caused distrust in our department,” Burley said. “As a team, we will work together to combat this anxiety and mistrust. We came here tonight to assure you we will not allow this negativity to stop us from doing our jobs.”

She said the teachers trust that the school, the Hollister Police Department, and the California Department of Education have completed thorough investigations, and that she was confident the investigations would have revealed whether a child had been harmed.

“I know that if any one of us here tonight thought for a minute that every student was not completely safe at school, we would speak up without fear of retaliation,” Burley said.

But former instructional aide Courtney Evans disagreed. She said retribution against those who speak up is common at San Benito High School.

“Just because people have questions, they should not be ostracized, and that is something that does happen,” Evans said. “People are afraid to speak out and we, as aides, were told not to speak to parents. There is a huge issue with transparency.”

Cheryl Rios, a special education teacher with the Hollister School District, said she valued the work that school board trustees perform, but felt the trustees have “fallen short of the ideal.” She said the board’s unresponsiveness and indifference to what parents were feeling was “an egregious act.” She said their success depends upon building relationships and wondered if any of them had spoken to the community on behalf of all the children they’re supposed to be advocates for.

“Sitting down with concerned parents and having a discussion goes a long way toward establishing a mutual relationship,” Rios said. “It’s time to rebuild the trust that your title of trustee implies.”

Holding a photo of her special needs daughter, Elizabeth, who has attended the same special education class the accusations were about, Susan Villa, who spoke before the board on June 25 after an anonymous letter brought the alleged misconduct in a special education classroom to the attention of the public, had difficulty expressing her feelings about the negative attention on social media being directed at special education teachers and aides, as well as herself. She said while Burley said she would do anything for her special needs child, the board chose to do nothing about the alleged incidents in the classroom.

Susan Postigo, a member of a special needs task force at Ladd Lane Elementary School, said there is a lack of communication to parents of special ed students and that the issue has had a tremendous negative impact on the high school’s special education department.

Ann Razya Pollock came to the podium to speak, bringing her severely disabled daughter along with her.

“This is Aspen Pollock,” she said, introducing her daughter to the board. “She was in Cheryl Hernandez’s classroom and the only thing I will say is this has had a profound effect on her. We’ve been working with a medical team not knowing what was really going on. Once we got more information it all made sense. I’m glad everyone is here and, hopefully, we can get something resolved, so we can feel our children are safe in an educational environment.”

Pollock told BenitoLink that Aspen’s Stanford-based medical team was trying to figure out why she was having “night terrors.”

“I didn’t know it was the classroom until I received the [anonymous] letter,” she said.

Pollock said Aspen could not communicate what happened in the classroom. She said parents of special needs students trust the school, and when they’re told the student has behavior issues the parents try to correct them, not realizing it could be something else entirely.

“If you don’t have that form of expression, how do we communicate to make them feel safe if they witness something that isn’t okay?” she said. “I understood that her intervener [aide] experienced some bullying and Aspen would have witnessed that. She can’t tell me ‘mommy, I’m sad because I saw this happen.’”