Anaid Godoy knows first-hand the challenge of being a young mother. 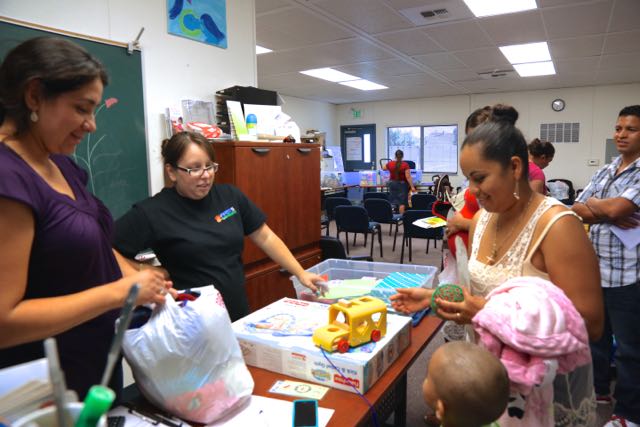 Hollister resident Anaid Godoy, who is in her mid-20s, is accustomed to a packed schedule and a lot of responsibility. “I have two of my own programs that I manage," she says with a sigh, "and … just being a full-time mom, full-time worker and a college student." Godoy has been working for First Five San Benito in Hollister for several years now. The agency, approved by California voters, educates parents and caregivers about the importance of the critical first five years of a child’s life.

Godoy looks like a young professional, tastefully made-up and wearing sharp-looking eyeglass. She says she's been lucky to have a full- time job with First Five as an administrative payroll person and program manager. She educates young families and helps them acquire essentials like car seats and strollers at a low cost. Parents in the program can earn tickets by attending classes and then they can spend their tickets on baby items and clothing.

Guiding and assisting young parents has been satisfying for Godoy but not long ago, she was a teenager — way off track and needing some guidance of her own.

Godoy says that looking back, some of the problems started when she was in middle school. “I remember middle school was when I started using drugs and I started smoking weed and getting into trouble,” she recalls. “I was still in school. I was doing good in school but that’s when everything started.”

“Like the first fight that I saw ever in class was right in front of me and it was just chaotic; a lot of drama going on. I think the first thing everyone just did was smoke weed.  It was the easiest thing to get ahold of I guess. That’s what they were doing.  Some of them were already selling it,” she says looking surprised.  “Back then… and, I mean, it was just middle school!”

By high school, she says her life was about friends, ditching class and hanging out at Target, where her mom worked and the closest thing Hollister has to a mall. She says that what she and her friends were up to was pretty harmless and that mostly they were bored.

“The years that I was in high school here, I felt like a lot of the teachers were racist in a way,” Godoy says. “It was like they were just picking on the Mexicans basically and we were their target. So I would get in trouble for nothing basically. It was pretty hard.”

Godoy says that unlike her friends, her father wouldn't allow her to go out in the evenings or spend time with boys. If she went to the movies, her mother always played chaperone. Godoy describes her father as old-fashioned and strict. Chaffing against his restrictions, she eventually ran away with a friend and ended up in Santa Maria.

“And that’s when I got more involved with gangs, because it is different there than it is here. And you are more active over there and they make you do more things over there,” Godoy says. She explains that by “things," she means things like gang initiation rites. “And I mean luckily I didn’t get…I got out of all of that before anything bad happened, but it was tough.”By the end of Godoy's junior year in high school, she was pregnant and a year behind academically.  She says, “I started independent study at San Andreas (Continuation High School) and I had a great teacher that helped me through it. I was in the Familia Program and they pushed me a lot to finish and get my high school diploma so I had a lot of support. Once I got pregnant, I didn’t feel alone anymore.”

Godoy says she had a good experience at San Andreas. Elena De La Puerta is a counselor there and spends a lot of time  getting to know the students and their families. “ There are signs there. They start not going to school they start cutting classes, sometimes it may be a class that they find hard," says De La Puerta.

De La Puerta says San Benito High School tries to help with tutoring programs and guidance but she says, “They (students) don’t like dealing with the homework and it gets really overwhelming. And what sometimes happens with the students is you start falling behind and you feel you can’t catch up.  They prefer to not bother showing up than trying to deal with this whole pile of work and a lot of times they come to us (San Andreas High School) really behind in credits,” says De La Puerta.

Liz Morales runs the Familia Program and met Godoy during her high school years. Familia is part of the Youth Alliance, a nonprofit that provides services for youth in San Benito County. The Youth Alliance website states that its vision is “to empower youth as leaders who contribute to the social and economic betterment of their community.”  The Familia Program works with teen parents and the public school system.

Morales remembers how withdrawn Godoy was. “When I first met Anaid, she was very isolated. Gabby (her first child) was very small and (Anaid) was struggling with school a little bit. She didn’t really want to go to school. She was in the house a lot.”

Morales says that Godoy was involved in the Familia Program for three years but it took a full year for her to start to open up. But once she started, she blossomed.  “She was the one who volunteered, provided with the extra hand that I needed. She would bring her family to help with the support group and programs that we had,” says Morales.

Godoy speaks with fondness about her counselor, Morales. “Liz is the main person who does the Familia Program and I mean, we’re still in contact now.  It’s been since I was pregnant in 2008 and so it’s been almost six years that I’ve known her and we still keep in touch”, says Godoy.  “I always tell her that if it wasn’t for her that I wouldn’t be where I am now because she always gives me these opportunities to become a better person. So I love her for that.”

Morales says of the Godoy she knows today, “She is a leader, not a follower at all. A lot of her goals have been met.  She’s grown tremendously to where she’s flying now.”

Godoy says that with children of her own, she has a better understanding of her father’s perspective. She expresses concern about teens growing up in San Benito County today saying they have few places to congregate that are a positive environment. She says would some day like to see youth have places where they could play games, study and hang out together.  She points out there is still a need for a center where the Spanish-speaking community can be comfortable and teens are welcome.

Godoy (who was pregnant when this story was written) lives with her mother, her two girls and her boyfriend, the girls’ father. She says she and her boyfriend  have considered marriage but want to be able to afford a nice wedding and that is still in the distance. On a normal evening, she has just a few hours to run home for dinner before she heads out again to class. Godoy is quick to point out that she wouldn’t be able to further her education without the help of her boss, First Five Executive Director Lisa Faulkner. “She pushes us to go to school and she tells us, ‘You’ll have a good job…just keep going to school, don’t stop your education.’ So now we’re majoring in child development and it helps me with my kids and I love it,” says Godoy.

As the sun sets in this quiet Hollister cul-de-sac, Godoy's girls slip on their pajamas. “Goodnight. Give me a kiss”, Godoy says to her daughters as they climb into bed. Their grandmother and their father are there to keep an eye on things as Godoy gathers up her books and heads off to her Gavilan College night class. She says, “ I just want to give my girls a good example that no matter what you do in life, you can still move forward.”

Note from Reporter: Godoy is currently on maternity leave from her job at First Five. She and her family are celebrating their new son.