Fireworks-related calls to dispatch dropped 24 percent, but reports through the app increased more than 573 percent on the Fourth of July 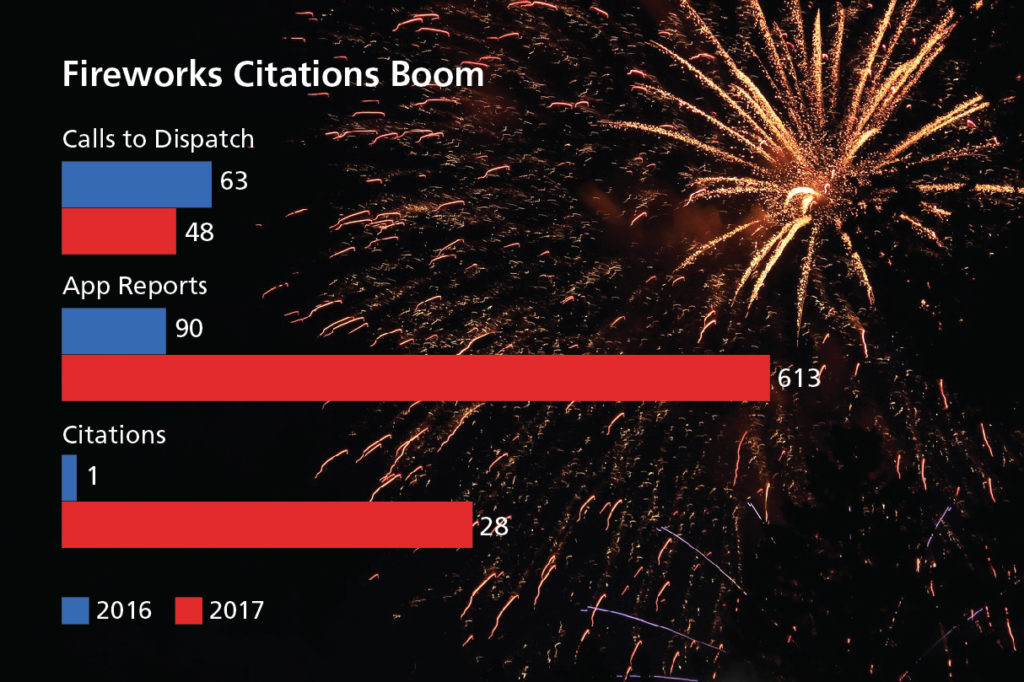 The Hollister Police Department and Hollister Fire Department joined forces to patrol for illegal and dangerous fireworks over the July 4th holiday, resulting in 28 citations being written for various illegal fireworks violations during this operation, according to a press release from the HPD. Last year, just one citation was written.

Hollister Police Chief David Westrick told BenitoLink that some of the citations are for $250, while "most of them were $1,000, though. It depends on the actual violation."

This year, the Hollister Police Department changed reporting procedures from MYPD to FOREalert, an app was designed originally for rapid responses to active shooting situations. Westrick, in a meeting with the developers in 2016, asked if FOREalert could be modified for reporting fireworks and include instant communication from the public to police officers in the field. The developers said it was possible and made the changes. The developers also agreed to not charge the City of Hollister or its residents for this application, this year.

The fireworks operation began at 5 p.m. Tuesday with a combined briefing with Hollister police officers, code enforcement officers and firefighters. The mission of this operation was to enforce illegal/dangerous fireworks laws and local ordinances, police said in the press release, noting that both Westrick and Fire Chief Bob Martin Del Campo were actively involved in enforcement activity on the Fourth, with the operation concluding at approximately 11:30 p.m.

Westrick said “because we had a solid plan, a great team and valuable/useable technology to assist us, everything worked well. The only issue we had was we did not have enough officers in this operation to take care of the incoming app messages. I did not anticipate that many people would download the app and then use it.”

He said the FOREalert developers felt that 10 to 15 messages or reports for the night would "would be a successful rollout, because we are the first police department in the nation to do something like this. I guess they got the bonus plan, because we received over 600. We will analyze the data for frequency of offenses/reports for a geographic location for next year’s operation.”

The Hollister Police Department asks the public to call the non-emergency line at 636-4331 or 911 for emergencies in relation to any further fireworks incidents or reports.