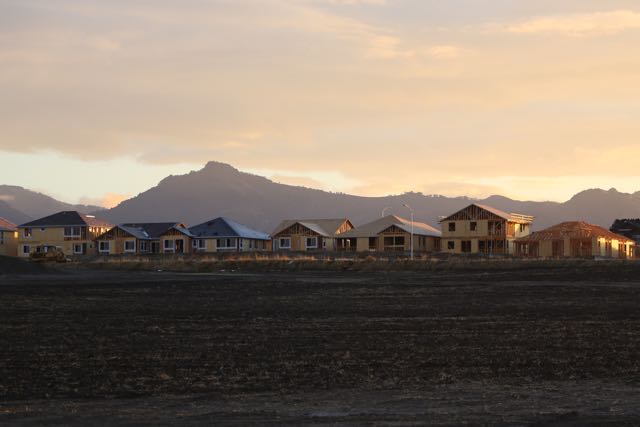 Rapid growth and potential over-development were the primary concerns among the issues offered to a small sampling of voters questioned in preparation for the June 2016 ballot. The Council of San Benito County Governments (COG) presented the results of their recent survey at a San Benito County Business Council luncheon on Feb. 4. The results were tied to COG's Traffic Impact Mitigation Fee (TIMF) Nexus Study. The Impact Fee study has been accepted by COG and will be going before the Board of Supervisors and Cities of Hollister and San Juan Bautista next month. An Expenditure Plan for the 1/2 cent sales tax measure planned for the June ballot will be discussed at the COG meeting this Thursday 3:00 pm, February 18th at the Board of Supervisors Chambers in Hollister.

The survey, which had a total of 392 respondents, showed that 19% felt overdevelopment/rapid growth occurring in San Benito County is the top issue among choices presented. Economy/lack of jobs was the second highest area of concern at 14%.  Road maintenance was the third highest with 10%, but when combined with traffic/transportation at 8%, the two added up to be the second largest “top of mind” problem with a total of 18%. Lack of effective leadership in elected officials and corruption showed 7%.

The report was presented by Mary Gilbert, executive director of COG and Eileen Goodwin with Apex Strategies. It researched the acceptance expected for the half-cent transportation sales tax under consideration for the June 2016 ballot. The survey group was pre-selected to match up with the characteristics of potential June 2016 voters. The survey was done in January with 305 answering online and 87 over the phone. The surveys were offered in English and in Spanish.