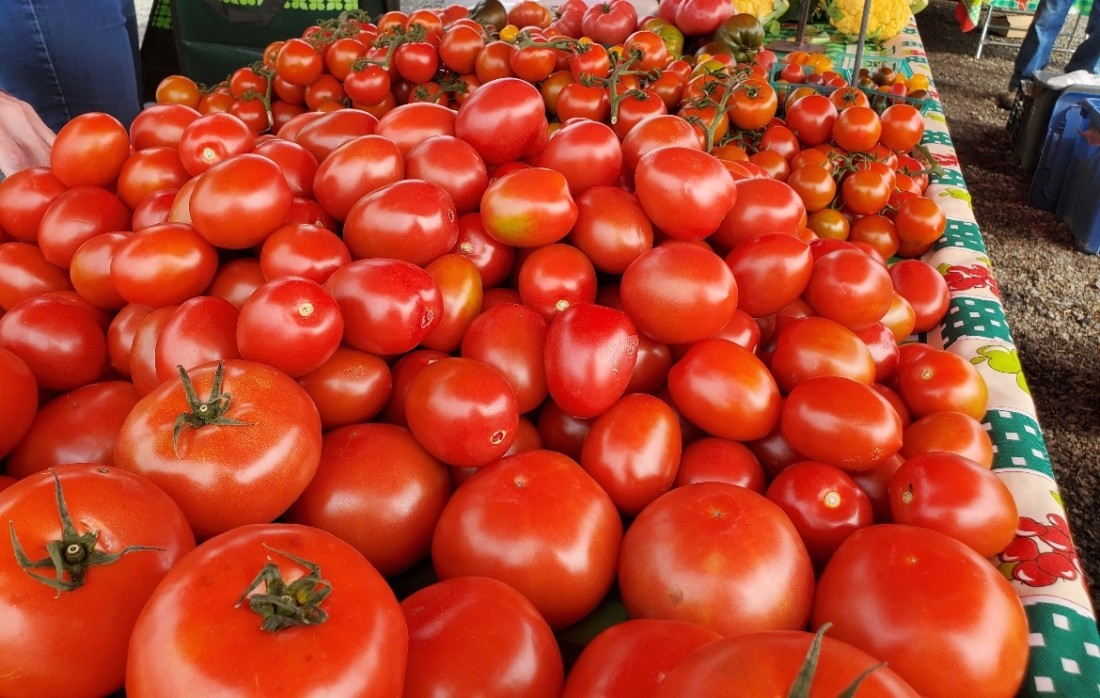 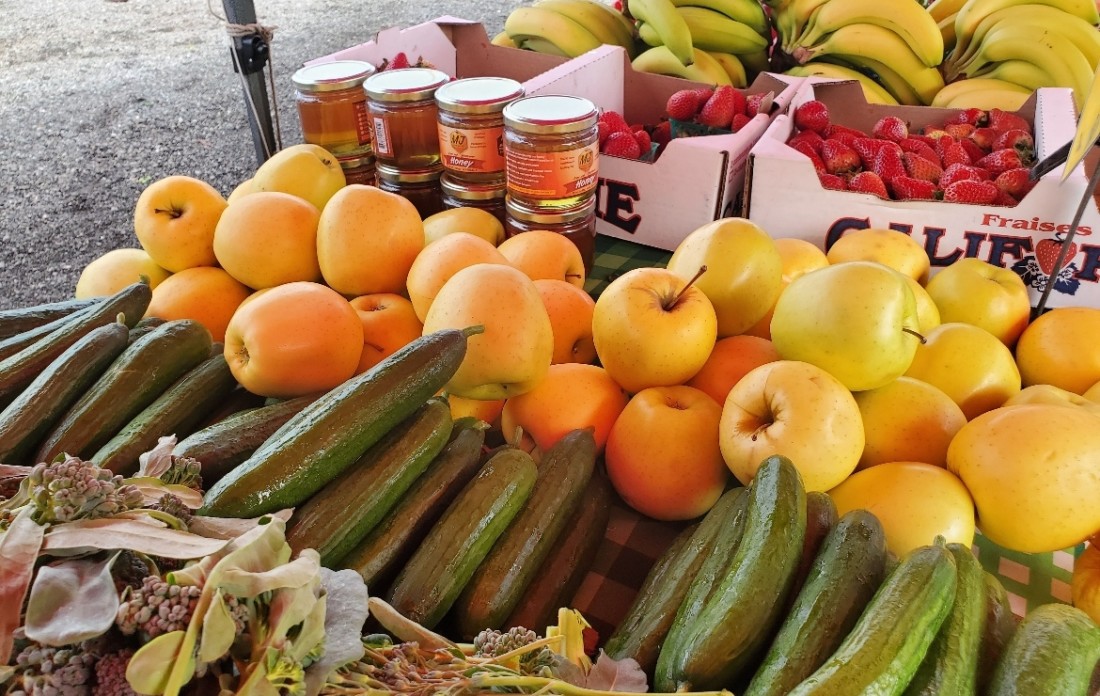 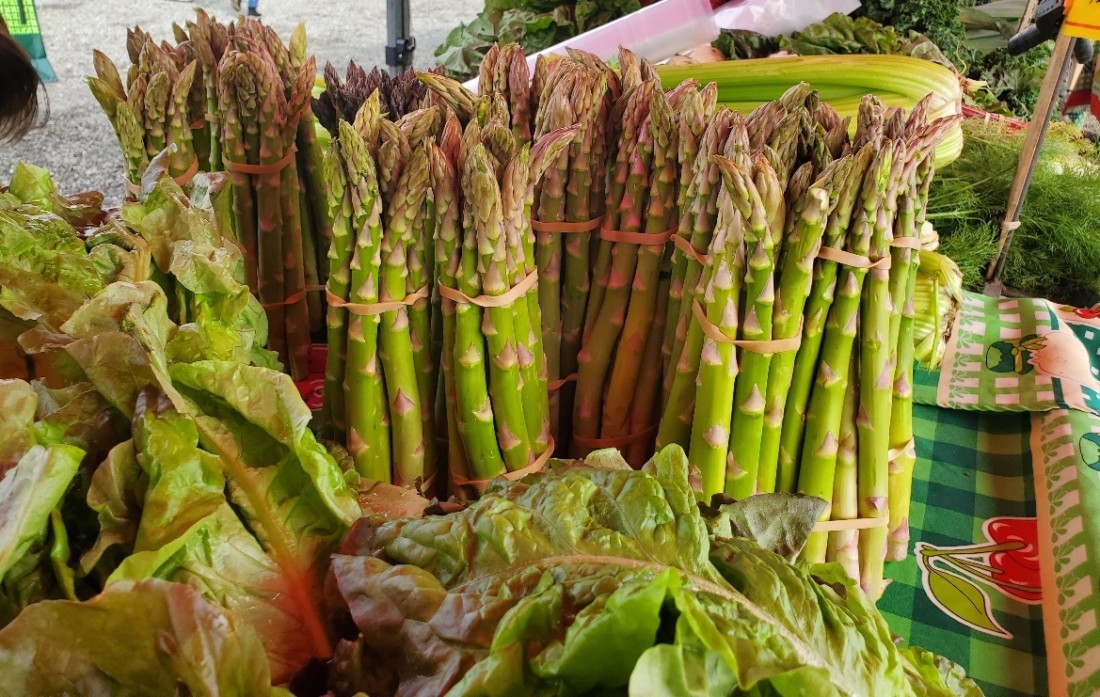 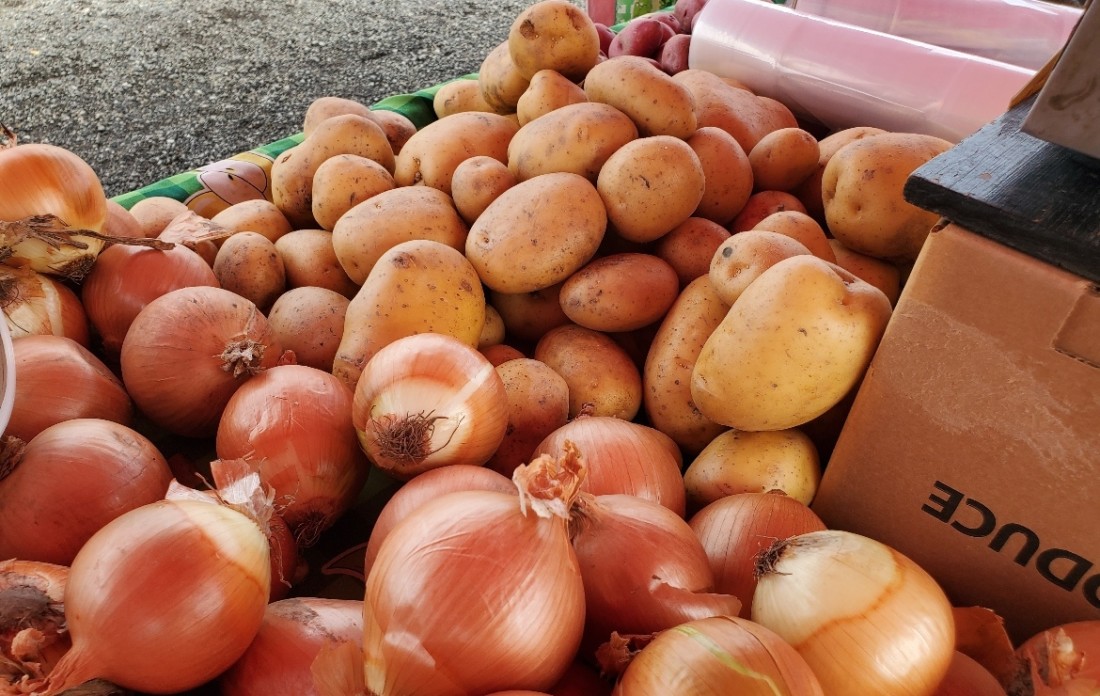 Fruits, veggies, sweets and wine available every Saturday through October. 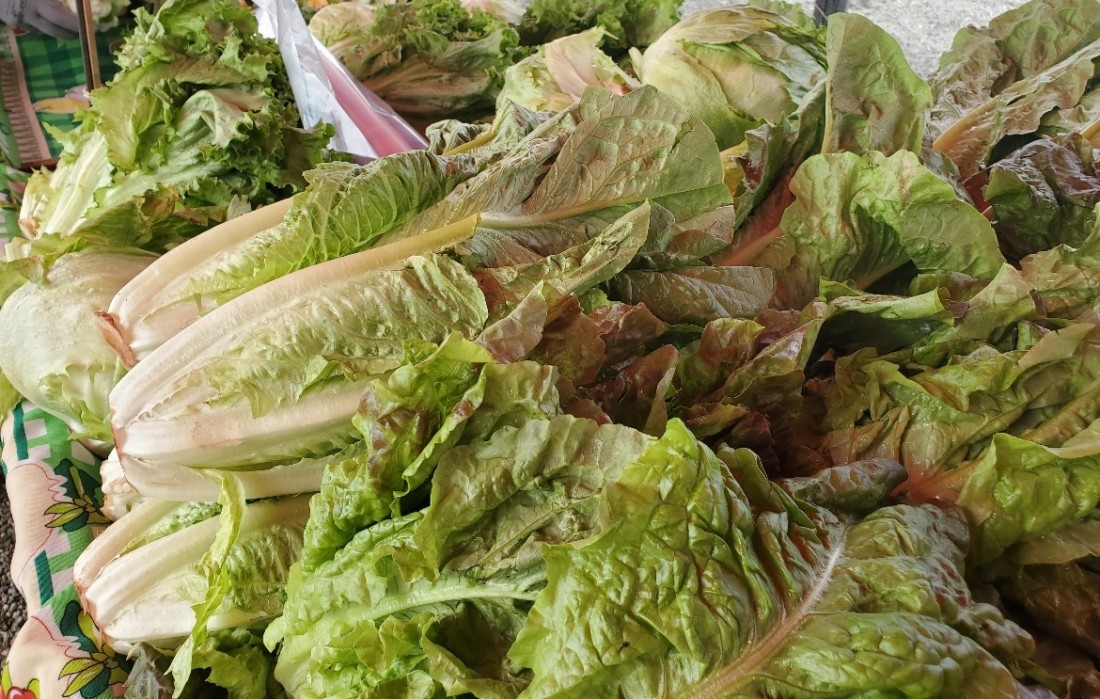 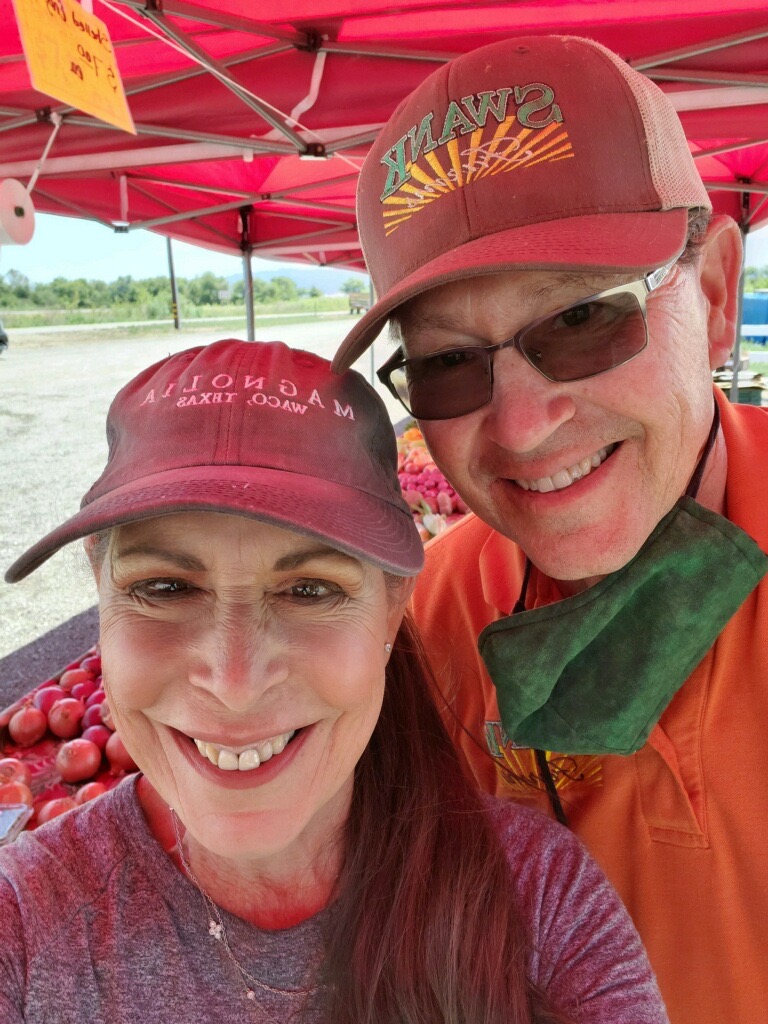 Known to locals for its annual pumpkin patch, sunflower fields, and corn maze, Swank Farms has added a new offering to its calendar: an open-air farmers market. Between 10 a.m. and 1 p.m. every Saturday from now through October, visitors will be able to select fresh produce from local farms and food products from local businesses.

The idea stemmed from a discussion between owners Dick and Bonnie Swank about creating a fruit stand.

“Dick has had three fruit stands before and he laughs and says he has never been successful at it,” said Bonnie. “We do a lot of farmers markets and send crews out to about 18 a week depending on the season.”

The Swanks discussed selling their produce onsite when they relocated to 4751 Pacheco Pass Highway in 2017, but decided against it.

“We had said we’re not going to get into the fruit stand business again, but when the pandemic hit we decided there was no reason not to do it,”Bonnie said. “People need fresh produce, so we decided to see how it does.”

“People are really appreciative of us offering fresh produce,” Bonnie said. “At a true farmers market you can only sell what you grow. But because we are not part of an association, we can bring in things from other farms.”

The market offers an abundance of items, all locally sourced.

Participating suppliers include Watsonville Coast Produce and LJB Farms in San Martin. The Swanks recently started sourcing from other growers who partake in local farmers markets as well.

“We bring in a lot of things we don’t grow that people really want,” Bonnie said. “We get artichokes, bananas, watermelons, fresh eggs from other local farms.”

LJB Farms, owned and operated by the Bonino family for over 100 years, was an easy match for the Swank market.

“We’ve been family friends for quite a few years now,” spokesman Brent Bonino said, “and when they asked us we were extremely excited. They are a great farming family for all the high-quality stuff they produce.”

According to Bonino, the shelter-in-place order has brought in new customers who have an increased appreciation for locally grown foods.

“Everybody is coming to us looking for corn, tomatoes, squash and garlic,” Bonino said. “They are seeking out local producers and now finding out what is grown in the area. It is good for the community and good for the growers.”

Bonnie agreed and said people are discovering Swank Farms because of the pandemic and lack of a local farmers market, with the cancellation of the traditional market in downtown Hollister.

“We know from experience that had we done this before the quarantine we would not have this kind of business,” she said.

In addition to providing an outlet for local growers to sell their product, Swank Farms is giving back to the community with donations to the Community Foodbank. The idea started when Al DeRose approached the Swanks with a proposition.

“He said, ‘I want to raise money and I want to buy produce to donate to the food bank,’” Bonnie said. “We decided, ‘if Al is going to do that, we will donate 10% of the sales too.’ It really turned out well, people donated extra money. One of our customers told me that she had needed to go to the food bank for the first time in her life, and came to our market because there was no fresh produce there.”

Over the course of two weekends, Bonnie said DeRose and the Swanks donated several thousand dollars’ worth of food and cash. The Swanks have pledged to continue their donations to the food bank for the entire run of the farmers market.

In the meantime, they see their market as a big plus for residents tired of confinement.

“People need to get out and I think we are the perfect location to come to,” Bonnie said. “Everything is all spread out and people are not on top of each other. I think they appreciate us being there for them and we appreciate them coming out to visit us.” 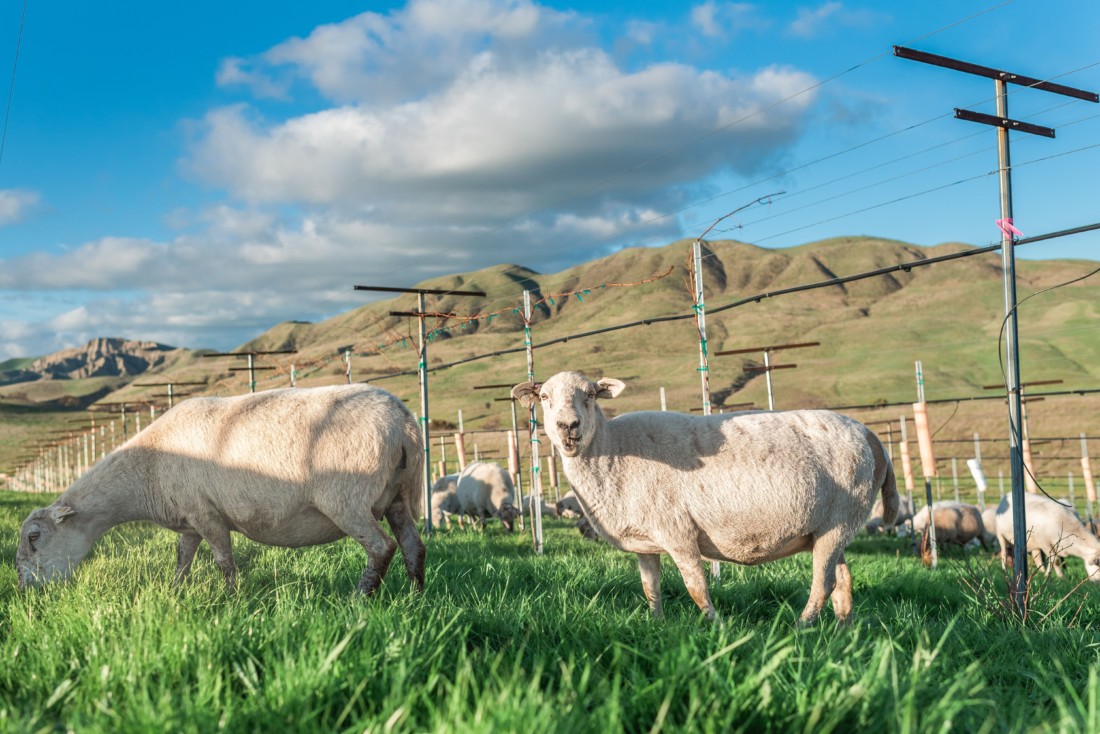 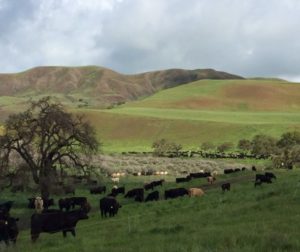