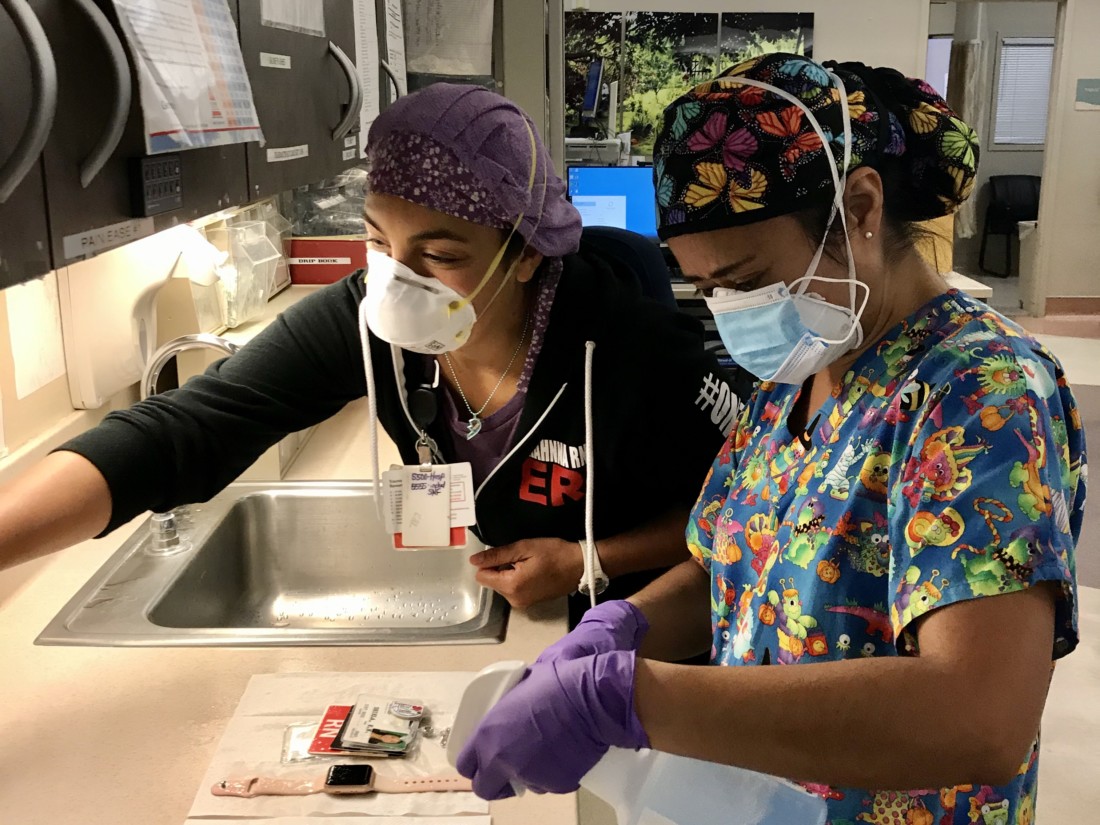 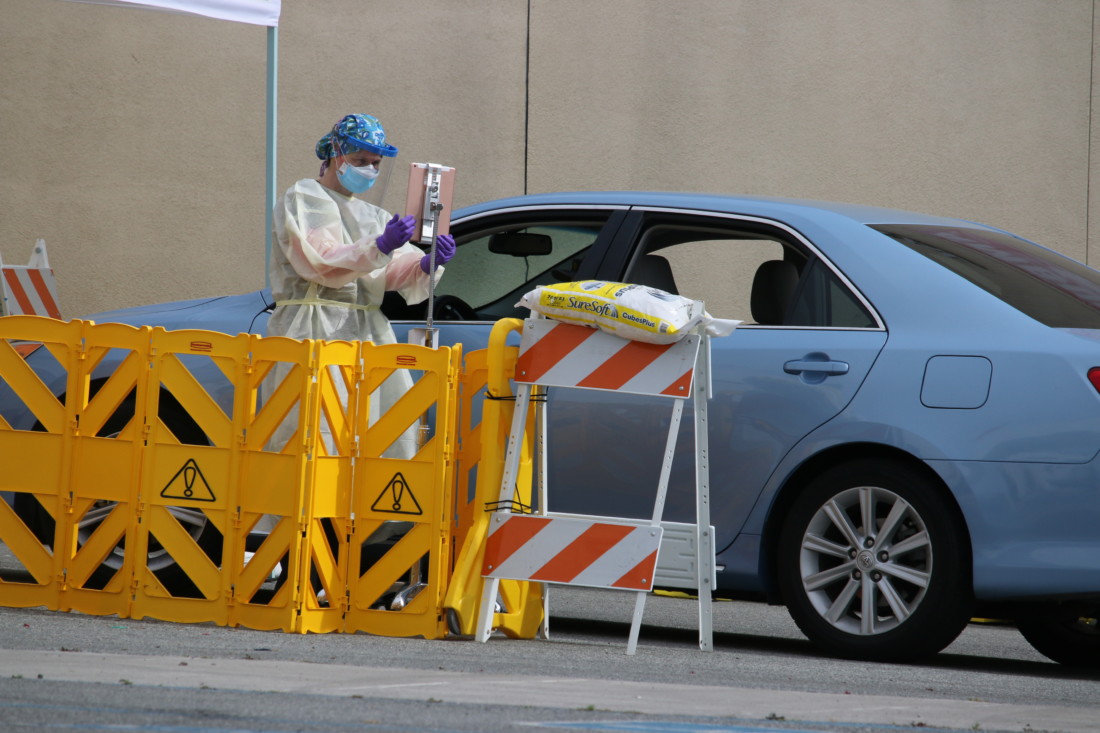 Anyone going through the ER for any procedure will be tested for COVID-19. Photo by John Chadwell.
×

Updated 4/30 to include state data.

Dr. Michael Bogey, emergency room medical director at Hazel Hawkins Memorial Hospital, recently described the facility as a “small rural hospital with a big mission,” but it is also similar to what other hospitals around the nation have experienced with the coronavirus pandemic.

At the beginning of April, Bogey was preparing the ER for an expected surge in COVID-19 cases, which involved issuing masks and other protective equipment, ramping up testing capabilities, changing the procedures by which the public would enter the hospital, and recruiting retired and out-of-county medical personnel.

But by April 28, things had changed. The surge did not materialize, and instead of recruiting doctors and physician assistants for the emergency room, their hours will be reduced starting May 1. There could even be layoffs.

Bogey told BenitoLink on April 29 that one person had been admitted to the hospital with COVID-19, and there have been seven positive cases identified in the last four days. There have been 50 confirmed cases in San Benito County since February and two deaths. According to the California Coronavirus Response website, there are 46,500 confirmed cases and 1,887 deaths statewide.

There is one major change, though, happening not only at Hazel Hawkins but all over the nation. The hospital is experiencing another kind of surge, as people suffering from various other ailments, including infectious diseases, are showing up for treatment.

“Now in the ER, we’re seeing a lot of really sick people, but not a lot of urgent care business that we normally see,” Bogey said. “That’s concerning because we’re seeing people who stayed home and should have come in because they are sick, but were afraid to come into the ER. Now they’re coming in and they’re really sick. We’re seeing a lot of strokes and exacerbations of chronic diseases.”

Bogey credited Gov. Gavin Newsom and local leaders for the success in keeping down exposure to COVID-19. He said people listened and stayed home, which he believed kept the surge from happening.

“Long-term, it remains a threat and will for some time,” Bogey said. “We’re still getting positives. Despite what you think about this thing, whether you think it’s a hoax or China trying to destroy Western Civilization, the threat is that it can still make a lot of people really sick in a short amount of time. I think that will be a problem for the next couple of years.”

A long battle lies ahead for San Benito County, he said.

“We’re going to hunker down and start figuring out how we are going to function as a hospital, post-coronavirus. Our next move is how to reopen our outpatient surgery, the clinics and to bring people back into the emergency department.”

As of April 25, Bogey said the hospital had a machine that can provide COVID-19 test results in as little as five minutes. However, people are not coming to the hospital for testing in the numbers they were only three weeks ago. He said testing has decreased from an average of 70 people a day down to as few as 40. Even so, he said people will be screened for COVID-19 before being admitted to the hospital through the ER department for all operating procedures.

The county will increase its own testing capabilities as soon as next week, according to comments from Health and Human Services Agency Director Tracey Belton at the April 28 Board of Supervisors meeting.

Random testing for asymptomatic people is still not encouraged, Bogey said, but if someone is showing symptoms, he will have them tested.

Bogey said there’s been a lot of attention nationally regarding antibody research in order to identify people who have developed potential immunity to the virus, but from what he’s heard from the infectious disease community and the World Health Organization, “they aren’t putting a lot of faith in that test.”

“However, it is becoming the thing to do because it will become the standard, so Hazel Hawkins will also be utilizing that test,” Bogey said. “It’s a matter of figuring out if it works for us, financially, because we’re charged for those tests.”

One of the hot button issues of the pandemic has been President Donald Trump’s suggestion that the anti-malaria drug hydroxychloroquine could help relieve symptoms of coronavirus. Bogey said that despite the controversy, Hazel Hawkins used the drug on four COVID-19 patients.

“We did not have any deaths inside Hazel Hawkins,” he said of using the drug. Though he couldn’t say if the drug helped, it did not harm any of the patients, one of whom was a woman on a ventilator for 12 days.

“It seemed to help, but there’s not enough data to say,” Bogey said. “We felt the risk-to-benefit ratio for the doses we were giving them was safe. There was enough data to support trying it, so we did.”

Going forward, Bogey continues to think about the impact of COVID-19 in New York, where 12,774 people have died statewide and 41,316 have been hospitalized as of April 29.

“This virus has the potential to make a lot of people sick in a really short period of time,” he said. “In the end, we may say ‘sure, it made a lot of people sick, but it still killed fewer than the flu.’ But if you look at the numbers in New York, they surged in weeks. The flu doesn’t do that.”

While the surge didn’t happen in San Benito County, Bogey said, “It’s easy to look back and say we overreacted.

“We may have, but I feel our future is this low-level threat, social distancing and these health orders will be released slowly. We’ll go back to life in this new world that’s forever changed, and we’ll all have to figure out how to operate in it.”

1,312 people have tested positive since February, 60 are active patients, 1,241 have recovered and 11 have died; the county’s current positivity rate is 4.5%.

1,310 people have tested positive since February, 68 are active patients, 1,231 have recovered and 11 have died; the county’s current positivity rate is 8.1%.

1,272 people have tested positive since February, 40 are active patients, 1,221 have recovered and 11 have died, with the latest death reported Sept. 18; the county's current positivity rate is 8.1%.