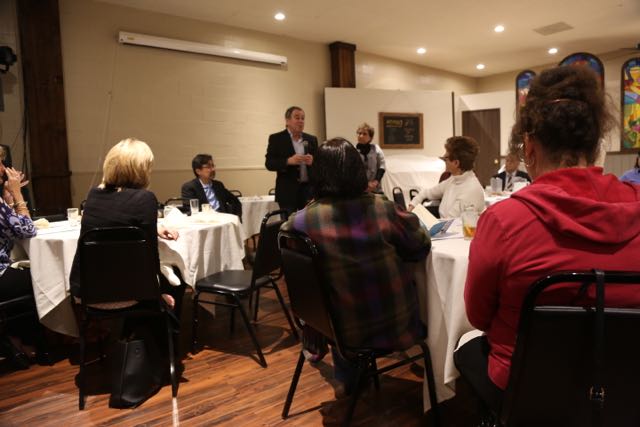 A stimulating conversation in a calm setting would best describe the “Lunch With Leaders” event held Feb. 17.  San Benito County Chamber of Commerce and Visitors' Bureau members gathered at Paine’s Restaurant to discuss the challenges and frustrations of housing members of the community at a reasonable cost.

Two project developers were present to describe recent projects that try to address the challenge of successful affordable housing in the region. Gabriel Torres of CHISPA (Community Housing Improvement Systems and Planning Association, Inc.) described several projects that have been completed or are in the planning stages in San Benito County. Torres said he has lived in the for 14 years and educated his children locally. He said that more than half of the contractors he will be using in an upcoming project will be local.

Dennis Lalor of South County Housing in Morgan Hill was also there to answer questions and describe some of the projects he has been involved in that address similar problems.

Discussion moved to the “Valley View Road” development approved to go in between Hazel Hawkins Hospital and Fire Station No. 2. Hollister Mayor Ignacio Velazquez expressed disappointment that the upcoming housing planned for the site was originally slotted for senior (defined as 55 and older) housing, but had been changed by the Hollister City Council. Velazquez made it clear to the group that he voted against the change. However, Councilman Ray Friend stood up and explained his reasoning behind the change, saying it ties to a core issue for the community.

“These are 1,200-square-foot houses and we have a lot of policemen, firemen and school teachers getting paid in the $80,000 range who could get these as a starter home,” Friend said. “Two people can get started in this house if they are priced in the low $300,000's."

Friend made the point that the county is having trouble retaining civic employees because of housing issues. “One-third of our policemen commute from Los Banos every day,” Friend said.

The idea of providing a certain amount of units for local civic employees spawned a series of questions about whether it is legal to assign housing specifically for this purpose. Lalor said he had worked on a project of this type in Santa Clara County. A number of cases elsewhere were cited and it was agreed that this idea deserved more research.

Julie Vieira, CEO of the Chamber, asked the group if they felt a focused discussion on a current topic was helpful and if they would like to have another Lunch With Leaders along this line. The Chamber members appeared to agree that it was a worthwhile format and that it should be repeated soon.