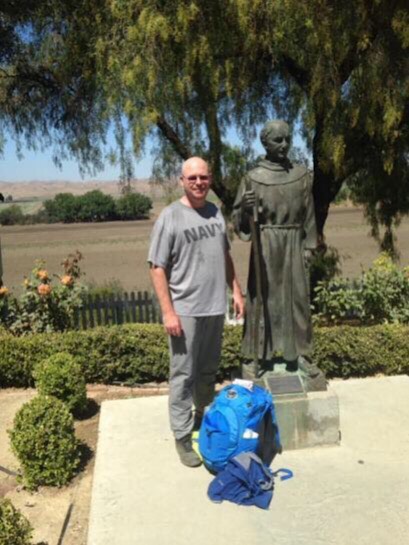 Clifford standing next to the statue of Saint Junípero Serra upon his arrival to Mission San Juan Bautista. Photo courtesy of Christian Clifford. 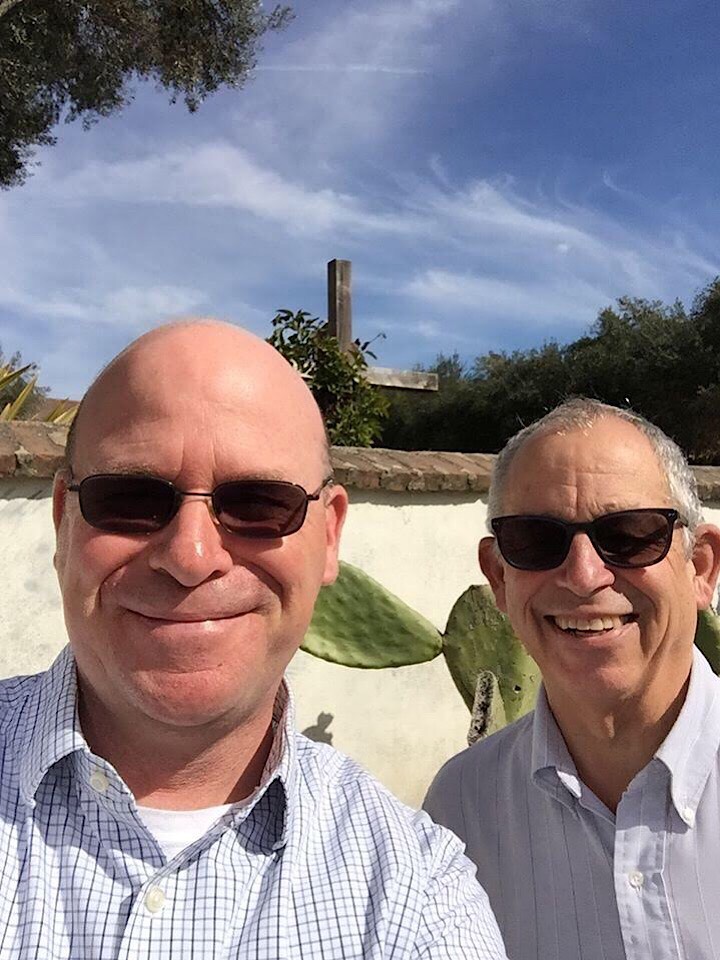 In a letter dated Nov. 29, 1800,  Fr. José Gasol of Mission San Juan Bautista explained to the Mission President Fr. Fermín Lasuén that his fellow parish priest Fr. Pedro Martínez wished to leave the three-year-old mission. Citing Martínez’s fear of earthquakes, aversion to the region’s landscape, and dispirited interactions with the fledgling congregation, Gasol pleaded for a transfer that ultimately was granted to the unhappy priest.

In July 2018, as he approached San Juan Bautista, Christian Clifford of Daly City recalled Martinez’s antipathy. But rather than shortening his stride, Clifford quickened his pace, eager to visit each of California’s 21 missions. The 49-year-old educator and author finished his two-year journey in June, becoming the 49th person since 2013 to have completed “El Camino Real de California,” or the mission walk.

“It’s a great way to know history, yourself, and your relationship with God,” said Clifford of the nearly 800-mile trek.

His decision to walk in the footsteps of the Franciscan priests—the Catholic order responsible for establishing California’s mission system—began on a whim, something to occupy his time while his wife and children were visiting the Philippines.

And rather than walking the entire distance “in one fell swoop,” the Junipero Serra High School history teacher chose a “piecemeal approach,” walking on weekends, extended vacations, or penciling in time while traveling across the state to give talks on his speciality, the Spanish and Mexican periods of California history.

His visit to San Benito County began when a train took him from his home to San Jose. From there he walked to Mission Santa Clara, then onto Mission Santa Cruz, and finally to San Juan Bautista, stepping onto the mission grounds on July 24, 2018.

Unlike Fr. Martinez, who disdained St. John the Baptist’s namesake, Clifford has always been struck by the mission’s distinctive location and the spiritual bond that parishioners have with the structure, which draws tourists from around the world.

“Its proximity to both the state park and to the El Camino Real, as well as its inspiring faith community makes it unique,” Clifford said of Mission San Juan Bautista.

Before joining friends for lunch and margaritas at a local restaurant to celebrate another leg of his journey, Clifford chatted with San Juan native and St. Francis Retreat Executive Director Fr. Ken Laverone, and later posed for a picture alongside the life-size bronze statue of Junípero Serra, California’s mission founder.

On learning that the Diocese of Monterey had dislodged the statue from its pedestal to protect it “from possible desecration by violence” in the wake of protests calling for the removal of symbols or monuments honoring events and individuals tied to the nation’s history of racial violence, Clifford was saddened.

He acknowledged the destruction of California Indigenous culture and the thousands of Native American lives lost during the mission period. But placing sole blame on the saint’s shoulders—Serra was canonized in 2015—is unfair and misguided, said the author of two books on the controversial Franciscan priest.

“Serra was a man of his times. And his legacy and history is misunderstood and misinformed,” said Clifford, a self-described Serra apologist who relies on the priest’s journal writings and other correspondence as a way to help others see his humanity and gain insight into his Christian faith.

“There are two California mission myths,” Clifford told BenitoLink. One myth paints the missions’ fathers as selfless and benevolent and the other casts them as diabolical and genocidal maniacs. Clifford believes that the truth lies somewhere in the middle.

Clifford’s stay in San Juan was brief; he headed toward Mission Carmel the next day. His chosen path out of the mission city was Old Stage Coach Road, site of today’s De Anza Recreational Trail.

“It was one of my top five sections of the walk,” he said.

Aside from an encounter with a bull on a narrow dirt road, Clifford said the route into the Salinas Valley was distinguished by its “safety, beauty, and connection to history.”

In notes he kept of his mission walk, Clifford wrote the following about this portion of his journey:

“I heard the footsteps and wagon wheels of the 240 men, women, and children of the Anza Expedition. When I reached the 1,140′ summit and took in the beautiful views, I wondered if they had the luxury to do so. When descending into the Valley, in total isolation, I could finally hear myself think. I prayed and with every step felt the blisters and sore muscles. So many friars who walked between missions must have felt the same, and then some. Immersing myself in the past has helped me be more empathic.”

Clifford joined a distinguished group when he reached Mission La Purisima in Lompoc on June 22. He became the 49th person to complete the mission walk since 2013, when the California Mission Walkers organization began issuing certificates.

And rather than depleting his energies, the 781-mile walk appears to have invigorated Clifford. He’s now hard at work on his fourth book.

“Pilgrimage: In Search of the Real California Missions,” is “not a tour guide,” he said. Instead it’s a memoir that incorporates his walking experiences to every mission with the lives and journeys of his fellow “predecessors of faith,” including those like Fr. Martínez—the priest that Mission San Juan never seemed to have charmed.