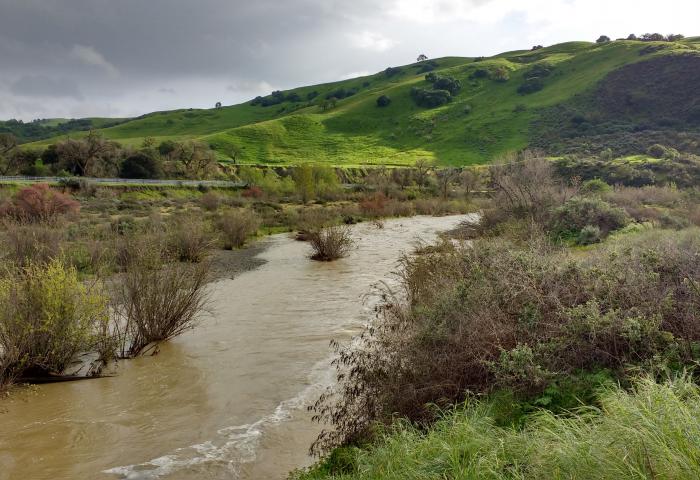 Winter 2016 saw improved hydrologic conditions in parts of California. More rain and snow fell in Northern California as compared to Central and Southern California; yet, due to California’s water conveyance systems, concerns over supply reliability have eased even in urban Southern California. Consequently, the mandatory conservation standards put in place by the state have been adjusted.

The water level in Lake Shasta, California’s largest reservoir, had plunged to less than a third of normal by the end of last year. Then came the El Niño rainfall, which by April had tripled the volume of water in the lake. The story is similar in Trinity Lake, part of the same network of federal projects in the far northern portion of the state that regulate the flow of water to the Sacramento River on its journey south toward the Sacramento-San Joaquin River Delta and San Francisco Bay. This is the same water that makes it way to San Luis Reservoir just outside Los Banos. The San Benito County Water District contracts with the federal government to receive some of this water.

In Southern California, the El Niño of 2016 was just a rumor, but in the northern part of the state the storms did show up and fed the reservoirs that in turn feed the southern part of our state. California is a single state with a system of dams and aqueducts that interconnect the people and their water supply and make the north’s water good fortune the entire state’s good fortune as well, even as the Southern California drought persists.

It’s tempting to believe that the state has weathered some dry years and that the brimming northern California reservoirs will now allow us to return to wet-year habits and lifestyles, but those days are gone forever. If the drought emergency is over, it’s only because drought is no longer an emergency, but a permanent reality. Mandatory state-imposed water restrictions have been lifted for now, but wasteful uses of water remain under a permanent ban, and water agencies and their customers would be wise to be ever more respectful of water and ever more sparing in their use of it.

Municipal water agencies across California are required to report to state officials on whether they have enough water to withstand three more years of drought. If they don't, a new state conservation plan requires them to calculate how much they need to start saving to meet anticipated demand. Officials with the State Water Resources Control Board are calling it a "stress test."

Under a complex calculation handed down by state water officials, local agencies have to quantify future water supplies given the assumption that California won't receive any more rain and snow in the next three years than it did over the previous three.

Water agencies then have to measure those supplies against anticipated demand. If demand outweighs supply, the agencies will have to start saving water immediately to make up the difference. The amount of the shortfall will be the new water conservation standard agencies will have to report to state officials.

Some agencies, say they've "zeroed out" — in effect they have identified enough water to meet anticipated demand down to the last gallon. Many water agencies across the state are expected to similarly zero out.

The water board will then spend weeks scrutinizing the tests to make sure they are accurate. But some area water agencies have already published theirs on their websites, and already it’s clear that a number of water agencies are abandoning mandatory water conservation entirely.

The managers of the Sunnyslope County Water District, the City of Hollister, the Water Resources Association of San Benito County and the San Benito County Water District all met right after the State Water Resource Control Board (SWRCB) released the method for gauging local water supplies for the next three years. Although projected local water supplies are healthy enough to meet water demand over the next three years, the local agencies feel compelled to still maintain water conservation targets. Last year we were at a 25 percent mandatory reductions compared to 2013 water usage. And landscape irrigation was limited to two days per week. This year the City of Hollister and Sunnyslope are asking for a 15 percent reduction compared to 2013 water usage and are limiting landscape irrigation to three times per week.

We don’t know if the rain we received over the winter was a short reprieve in a longer drought. We could go right back into dry conditions next winter. In fact, the National Oceanic Atmospheric Administration (NOAA) is predicting a La Niña event for winter 2016-2017.

El Niño officially came to an end in early June, and experts are calling for a La Niña to develop in its footsteps. La Niña is the cool counterpart to El Niño, characterized by unusually low ocean temperatures in the central and eastern equatorial Pacific.

Residents will receive the new, local water mandates with their water bills in the next week. A complete list of restrictions will be outlined. Or you can go to the Water Resources Association of San Benito County’s (WRASBC) website at: www.wrasbc.org and see the new restrictions on the Home Page in the left hand column under “This Month”. The new water restrictions are also published in the Hollister Free Lance and San Juan Bautista’s Mission Village Voice newspapers.

During the height of the drought last year water agencies reduced fire hydrant flushing to save water. Fire hydrant flushing is required and necessary to maintain water quality for potable (drinking) water. Our city has a complex system of water pipes that deliver water. This system requires regular monitoring to ensure safety for all who use it. So, contrary to what you might see and think as water waste is actually a necessary service.

Hydrant flushing is performed for two main reasons, either fire flow testing or maintenance and water quality. Fire flow testing is done to exercise and ensure fire hydrants are operating properly. The other reason water agencies flush hydrants is for maintenance to remove stagnant water that may compromise water quality. Hydrant flushing is a public safety issue. Before water is delivered into customers’ homes, agencies make sure that it is safe for human consumption.

The WRASBC is a locally-based agency focused on water resource management in San Benito County, representing the City of Hollister, the City of San Juan Bautista, the Sunnyslope County Water District and the San Benito County Water District. They can assist you with conserving water. with many programs and services. They are also the agency to contact if you see water waste occurring. To reach them call: (831) 637-4378.