Fisher learned to cook in Paris, worked in New York four-star restaurants, but came back home to start his own business 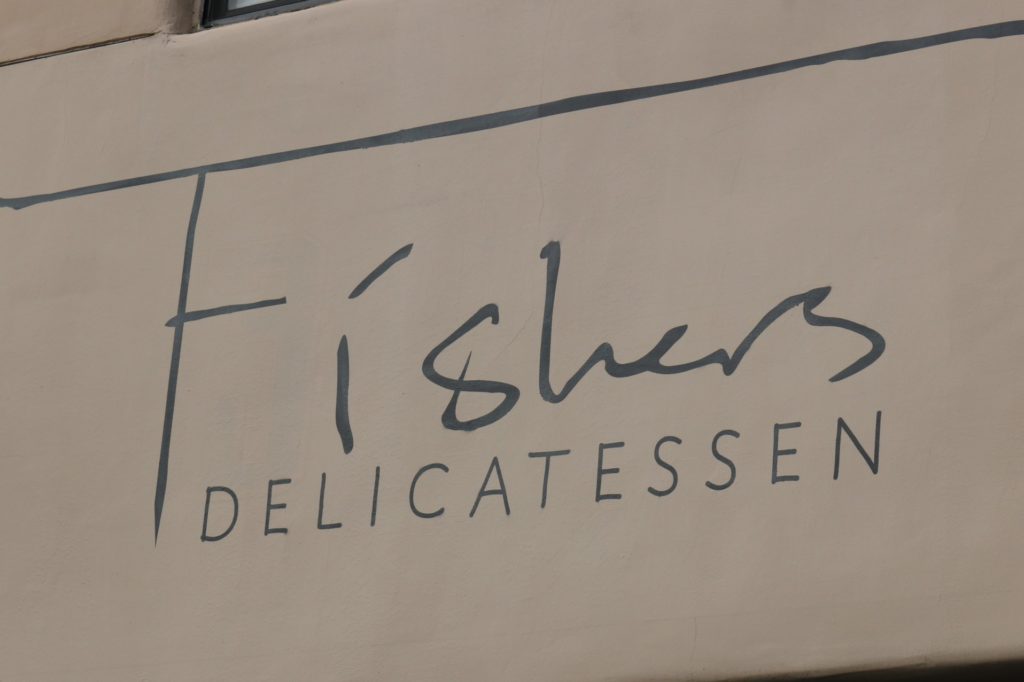 Mike Fisher brings his European training as a chef to downtown Hollister. Photos by John Chadwell. According to a Cornell University study, 27 percent of all start-up restaurants fail the first year, half go out of business within three years, and, if fortunate enough to last 10 years, it has beat out 70 percent of its competitors.

Knowing the odds against success, and fully understanding that downtown Hollister can be a bit iffy for a new restaurant—particularly at a location where two other eateries have packed up a left—Mike Fisher, 30, still decided destiny just might smile on him and his new venture, Fisher’s Delicatessen and Catering.

Located at 650 San Benito St., across the street from the Veteran’s Memorial Building, the newest restaurant at the ill-fated spot may beat the odds because Fisher is not just any foodie to slap on an apron and deem himself a chef.  For a local boy who has returned to the fold, as it were, Fisher has some bona fide culinary credentials when it comes to whipping up a soufflé or tossing a salad.

Le Cordon Bleu and Michelin Stars may be unfamiliar terms on San Benito Street, but they are a measure of pedigree when it comes to fine dining. Along his path to becoming a world-class chef, Fisher stopped along the way to learn his trade at Le Cordon Bleu Paris, a culinary arts school established in 1895, and attended by such food luminaries as Julia Child. He also made a detour along the way back to Hollister to work at some of New York’s finer restaurants with Michelin Three-Star ratings to add to his gastronomic proficiency.

Fisher’s journey to becoming a restaurateur can be traced back to before he’d reached his teen years while helping out at Swank Farms and in the television kitchen of Dorothy McNett. At 14, he officially broke into the dining biz as a dishwasher at the Tres Pinos Inn.  Over the next five years, he worked his way up the food chain to assistant manager, while helping out in the kitchen because he had already developed a passion for cooking.

“I wanted to become a chef and I had to decide if I wanted to go to culinary school or not,” Fisher said, adding that he couldn’t afford to attend school in the United States.  “I just wanted to work and was going to learn it on-the-job, but a friend asked if I had ever looked into the Le Cordon Bleu Paris.”

At 19, he headed for France to visit another friend attending American University. He stayed on his friend’s couch for a week while looking over the school and walking around Paris. He returned to the U.S. determined to save his money in order to attend the school. Fisher saved every penny he could and applied for a “very dangerous credit card” and it wasn’t long before he was back and attending Le Cordon Bleu, despite the handicap of not speaking a word of French.

“I spoke semi-fluent Spanish before I went over there,” he said. “I learned it just by working in the kitchen at Tres Pinos Inn. So, I thought I could do the same with French. I was wrong. I had applied to become a chef’s assistant at Cord Bleu Paris and one of the requirements was you had to speak French.  I lied and I was running around trying to figure out what the chef was yelling at me. It took about two minutes for somebody to figure out I couldn’t speak French.”

Fisher persisted, though, and did learn enough French to get through the school. Upon his return again to the U.S. he soon realized that he had only thought he knew the restaurant business. He quickly realized it is a high-pressure business, which he discovered he thrived on. And he was just 21 at the time.

“I continually looked for the more challenging and often less paying jobs,” he said. “Mike Howard, the owner of Tres Pinos Inn, helped me get my first job at a hotel, which was the Omni Homestead Resort in Hot Springs, Virginia, which, I believe, is one of the first hotels built in the United States in 1766, that’s still standing.”

Fisher said he toured the entire hotel, working in its two restaurants, the employee cafeteria, and a ski lodge. He learned he had a knack for working banquets, while there. He stayed there for a year before moving on to the Hotel Del Coronado, in San Diego, which had merged with the Homestead.

“I missed the West Coast and my kid sister had just graduated high school and was going to San Diego State, and I felt I needed to make sure she didn’t get in trouble there, so I got a job there as a kitchen supervisor,” he said. “That was serious volume and on any given day we would have two dinners of 500 people, and another of 250 people and a cocktail party. I learned how to produce in volume and quality.”

Fisher toured the entire hotel, working in two fine-dining restaurants, as well as a casual restaurant. After another year, he was ready to move on again. He was thinking of starting up his own venture, but was offered a position to work for Chef Cal Stamenov at Bernardus Lodge and Spa in Carmel Valley.

“He became my mentor in the kitchen,” Fisher said. “I ended up becoming the banquet chef there and also helping out with a Marina restaurant. I spent about three years working at Bernardus and it is one of the happiest times of my career. Under Cal, it pretty much defined my style of food and management. I grew more in that three years than the entirety of my career, so far.”

It was nice to get back in touch with the Central Coast area where he grew up, Fisher said.

“(Stamenov) bought a lot from Swank Farms, who I knew because I worked for them when I was 13,” he said. “Well, they’re actually my distant cousins. I helped pick produce and go to the farmers’ market. So, when I ended up at Bernardus I found out that Swank had grown from doing farmers’ markets to selling to all the big hotels and growing the best heirloom tomatoes.  And when Dick Swank came to the loading dock, both of our eyes got kind of wide and we both asked, ‘how did you end up here?’”

After three years, Stamenov and Fisher agreed it was time for him to move on.

“I decided I had to get some Michelin stars under my belt,” he said. “I went to New York City. I decided I wanted to work at Daniel Boulud, a three-Michelin-starred traditional French restaurant on the upper east side of Manhattan. I drank some really good wine and ate some really good food, and I was in New York City. There was just too much to do. I lived there for two years, but I think I aged four years. You don’t sleep very much in New York because there’s always something going on.”

Fisher also worked in Boulud’s catering division for high-end celebrity parties in Manhattan, as well as in the Hamptons in Connecticut. He said that through his time at the restaurant he got to experience perfection in dining preparation while working with some intense chefs.

“There was a lot of yelling going on and it made my skin thicker than it already was,” he said. “After that I moved back to the West Coast and here I am today.”

Upon his return to Hollister last year, he started Fisher’s Catering with most of his contracts in Monterey, Carmel and San Jose. While his business was located in Hollister, he cooked wherever the job was, using “borrowed kitchens,” depending where the event was.

“It wasn’t easy,” Fisher said. “I would pick up the produce and go to a kitchen early in the morning and rent different people who I knew and execute the job. I ended up doing a lot of events at De Rose Winery (on Cienega Road south of Hollister) and I ended up living out there. I grew very close with them and we work symbiotically with food and wine. They have a very nice venue out there, where they do weddings and corporate events. I would bring everything out there, we’d light the grills up and do some good, old fashioned farm-to-table dining.”

When asked why he came back to Hollister, Fisher said a lot of people tried to convince him not to do so. One reason is because Hollister is where his family is and though he could have stayed in New York, he didn’t want to spend his life living away from home and the people he loves.

“I just love it here,” he said. “I don’t think there’s anywhere better to live than the Central Coast of California. I need the sun and dirt between my toes. The second reason is that no matter what I’ve been told against it, I think Hollister has more potential than I’ve seen anywhere else. It’s a gold mine when it comes to food. All the produce that goes to the best restaurants comes from around Hollister and around Salinas.

“Why would I want produce that had to sit on a truck or go to a warehouse when I can call a farmer and say ‘I’m running low on cauliflower soup,’ and they literally go out and chop it out of the dirt and within three hours it’s into the soup cup. Being able to cook like that makes my life great.”

Before opening the restaurant, Fisher said he conducted equal parts research and keeping his fingers crossed.

“You have to take a leap of faith,” he said. “If I do fail I’ll sleep well at night knowing that I tried.”

Fisher’s Delicatessen is open Tuesday through Saturday, 11 a.m. to 8 p.m. Fisher said a typical meal, with wine, for two can run $25 per person.