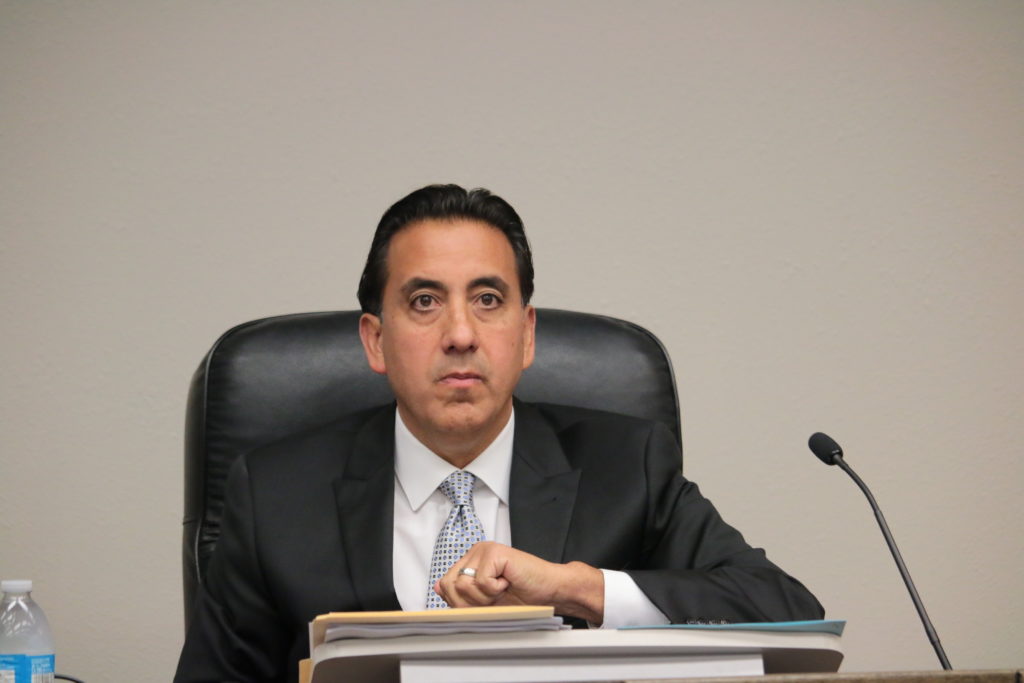 Mayor Ignacio Velazquez said he may possibly sue because of the council's decision against his appeal. Photos by John Chadwell. Velazquez's attorney Edward Schexnayder said the council needed to obey the law and deny permits to the applicants. Photo by John Chadwell. Vice Mayor Marty Richman kept a tight reign on the audience when they started to applaud speakers. Photo by John Chadwell. Resident Cody Dalton said neither she nor any of her friends could afford to live in Hollister and that she's excited about the 22 condos included in the 400 block project. Photo by John Chadwell. Kay Felice said the development would bring the excitement back to downtown. Photo by John Chadwell. Community Foundation President and CEO Gary Byrne said it might be best if the issue went before a judge. Photo by John Chadwell. Councilwoman Carol Lenoir said because of her many years in planning she approved of the 400 Block project. Photo by John Chadwell City Manager Bill Avera said he did not tell Councilman Rolan Resendiz that the Wolf family would build a library if the project fell through. Photo by John Chadwell.
×

In a 3-1 vote, the Hollister City Council approved on June 3 a resolution that upheld the city Planning Commission’s approval for a minor subdivision and conditional use permit for a mixed-use project on the corner lot at San Benito and Fourth Streets, more commonly known as the 400 block. In doing so, the council denied Mayor Ignacio’s Velazquez’s appeal to block development.

Even after overwhelming public support in favor of the Del Curto Brothers Group and Community Foundation for San Benito County project that includes retail, 22 condominiums and a new philanthropic center for the foundation and local nonprofits, Councilman Rolan Resendiz was the lone “no” vote and said there would be a lawsuit. Velazquez recused himself from the agenda item.

Benitolink asked him after the vote if he intended to sue.

“Most likely,” he said. “I’ll have to talk with my lawyers.”

Velazquez also threatened to sue the city in 2017. He wrote on Facebook at the time that his four fellow council members took away city residents’ right to vote and free speech, adding that the council’s “developer friends can make millions of dollars building condos on the 400 Block.”

If there were to be a lawsuit, it would most likely be against the developers, according to City Manager Bill Avera. Gary Byrne, president and CEO of the community foundation, told Benitolink it would be good if a judge were to finally settle the matter, and that it could cost upwards of $100,000 to fight it.

Velazquez has attempted to stop development on the 400 block through a continuous social media campaign, a failed referendum and repeal effort in 2018. On May 20, the council delayed the appeal hearing until June 3 after attorney Lauren Layne of Baker Manock & Jensen said she received a letter from Velazquez’s attorney regarding confusion of the city’s public notice in the Hollister Freelance newspaper. The council hired Layne to assist with the appeal hearing on May 13.

Associate city planner Abraham Prado recounted the history of the 400 Block following the 1989 Loma Prieta earthquake that razed the block. He told of 30 years of coordination between the city and the state Redevelopment Agency, as well as taxing entities, and the failed attempts to develop it. Prado disputed Velazquez’s claims that the city violated environmental and zoning laws. Velazquez’s lawyer, Edward Schexnayder with Shute, Mihaly & Weinberger LLP, said Prado’s report omitted the fact that the city and redevelopment agency spent over $750,000 on a portion of the lot and sold it below what it was worth. He said the council was compelled to deny the application.

Twenty-three residents and members of the local business community came to the podium to speak when Councilman Marty Richman opened the floor to public comments. Only resident Jennifer Westphal spoke against the project. Christina Lawson, an attorney for the Del Curto Brothers Group, said the appeal was not about the environment, zoning laws or municipal codes.

Community Foundation Board Chairman Phil Fortino said Velazquez, masquerading as a private citizen, has used numerous “red herrings” to thwart the project. He asked what sort of message was being sent as the mayor threatened to sue his own city. He clarified that the $750,000 spent on the site was to prepare it for development after the 1989 Loma Prieta earthquake. Salvador Mora, a vocal critic of Velazquez, said he believes the mayor’s motivation is to stall the project long enough so it will be too costly for the applicants and they will back out of it. Kay Felice, a 42-year resident and business owner, said the “cornerstone project will revitalize downtown” and “restore it to the exciting and vital place it used to be.”

Resident Cody Dalton said the 22 condos will offer housing opportunities to younger professionals who will live and shop downtown.

“I’m 25 years old and I can’t afford to buy a home here and neither can any of my friends,” Dalton said. “The housing that’s going to be built there, that’s something I’m excited about.”

Councilwoman Carol Lenoir said the project conforms to the General Plan and meets the city zoning ordinance. In what she called a Hollisterism, Lenoir said, “Only in Hollister can you get a $1 million donation by the Wolf family for downtown and we’re questioning it.”

Resendiz said the project was actually two projects and he told the crowd that he heard the Del Curto Brothers were unable to maintain the capital for the project. He said when he spoke to Avera about it, Avera told him not to worry because the Wolf family “would be building us a very nice library there.”

Later, Avera told Benitolink that his talk with Resendiz was a “what-if discussion,” in which he told the councilman that if the deal fell through the process would have to begin all over again and could include anything, perhaps even a library. He said he never mentioned the Wolf family paying for a library.

Resendiz also questioned the makeup of the audience, saying as members of nonprofits they were not an accurate representation of the community.

“The general population, at large, does not support this project, therefore, neither can I,” Resendiz said. Though out of the 26 people who spoke during public comment, only one was against the 400 block development project.

Richman spoke emotionally about how he respected and intended to follow the law. He said it hurt him personally to have members of the council say, “‘I don’t care about the law. I’ll do whatever the hell I want to do.’ And now a representative of one of those people is standing in front of me, telling me I should respect the law.”

He said after reading hundreds of pages of staff-produced background materials and law, common sense has to rule.

“The decision of the Planning Commission holds up legally,” he said.

See the meeting courtesy of CMAP.