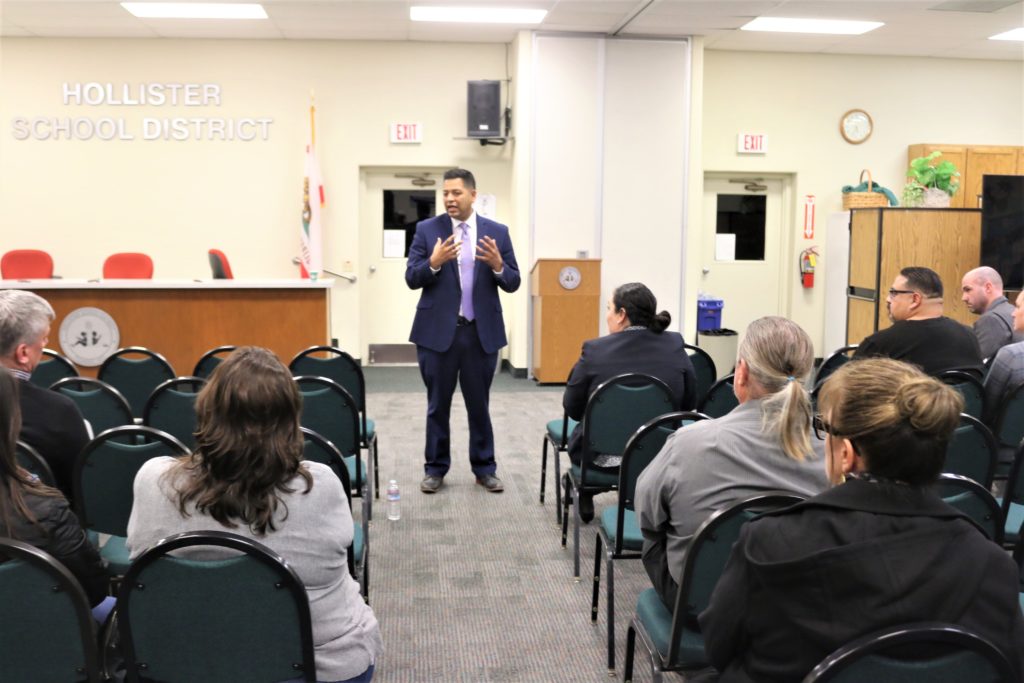 Diego Ochoa speaks to the public during a 2019 board meeting at which he was introduced as the new superintendent. Photo by John Chadwell.
×

The signs of an impending implosion of the special education program were all there: from a teacher’s resignation in 2014 over mistreatment of a special education student that led to a federal lawsuit costing the district over $500,000 (Leyva vs. Hollister School District), to cutting 14 staff members from the program in 2017, resulting in two investigations.

The investigations concluded that the Hollister School District failed to meet state requirements and denied parent requests for special education assessments or Individual Education Programs (IEPs) for their children. The special education program went into a freefall to the point where there were over 40 unresolved complaints and the California Department of Education (CDE) threatened to take over or defund the program. After HSD Superintendent Lisa Andrew unexpectedly resigned, interim Superintendent William Barr recommended spending an additional $10,000 to hire consultant Marilyn Shepherd to conduct a third investigation. The primary finding from Shepherd’s investigation was a need to establish better communications between Hollister School District staff and families, particularly Hispanic families.

BenitoLink met with Ochoa on May 28 in his office to discuss the recent reorganization and funding of the special education program. In addressing parents’ and advocates’ concerns for more bilingual teachers and staff, Ochoa said he is moving in that direction.

“We have many many new staff members for the 2019-2020 school year,” he said. “Among those new hires are four bilingual school psychologists, a bilingual occupational therapist, and a bilingual Coordinator of Special Education.”

One of Ochoa’s first decisions was to hire a new director for special education. On March 2, the Hollister School District Board of Trustees announced the appointment of Gwen Baquiran and she took over the position on April 2. Baquiran served as a program specialist for the San Benito County Special Education Local Plan Areas (SELPA). She previously worked for HSD for seven years.

“Gwen is taking on a critical role in HSD,” Ochoa told Benitolink. “Our special education department is in need of major improvements and she will bring the leadership we need to turn things around. Gwen will identify excellent practices in place, establish standard protocols, update policies to shore up deficiencies, hire additional staff, reach out to parent groups, and restructure the department.”

Taylor said that even though they don’t always agree, she deeply respects Baquiran.

“She has the best interest of kids at heart and is working diligently to improve HSD,” Taylor said. “She has a wealth of knowledge that has been refreshing to work with.”

Baquiran said the special education reorganization was developed based on student needs.

“The Hollister School District annually receives an allocation for special education services, but it is never enough to pay for the services provided to our students,” Baquiran said. “As a result, the special education program ‘encroaches’ on the general fund.”

Therefore, she said, the budget development for the reorganization shows that the district will spend at least $500,000 more for special education services (not administration) in 2019-20 than in 2018-19. “However, we plan to substantially reduce the amount of money spent on litigation,” said Baquiran.

“The increase in legal expenses,” Ochoa said, “was directed at paying for legal counsel to advise the district regarding CDE complaints and contested IEPs.”

He added, “Now that Gwen and I have implemented a collaborative approach with parents, we are greatly reducing the amount of legal work necessary for the district. Our plan is to use local measures (improved communication at IEPs, alternative dispute resolution, and facilitated IEPs) to return to the days when we spent between $25,000 and $50,000 per year in legal expenses.”

Baquiran said the hiring process is ongoing for both special education teachers and speech-language therapists to ensure that classrooms are staffed appropriately to meet the needs of students with disabilities in HSD that will, hopefully, reduce the need for the more expensive contracted special education staff.

“I already am seeing improvement, but it will take time to implement some of the changes,” she said. “There is a need for general education teachers to understand IEP goals and accommodations and implement the IEPs in their classrooms. Staff receive training, but the ability to follow through with fidelity on what was taught is very important and is needed to improve services and support. More is being asked of teachers and staff and that is a challenge.”

Taylor said she doesn’t know whether the 40 CDE complaints have been addressed or not.

“I am aware that there are still problems with serving the Spanish-speaking community,” Tayor said. “There are many IEPs and reports that have not been completely translated into Spanish, but I know that Mr. Ochoa has hired staff to work on this five days a week over this summer. He estimates a five-month backlog will be eliminated, but I have heard from families that have waited as long as two years to have their IEPs and reports translated.”

She said the district is still looking for a well-qualified interpreter.

Ochoa told Benitolink he knew from the outset that he had to resolve those CDE complaints quickly and that it wasn’t going to be cheap. He said HSD had to pay more than $250,000 in legal fees to resolve the complaints. Previous district leadership’s attitude when a parent asked for help for their special needs child was to either deny any assistance or give them a “take it or leave it” choice, he said, and he plans to work with parents and come up with the best possible solution.

“When you run a program that has major problems and you don’t have the staff, you end up paying legal fees to defend actions the district took that shouldn’t have happened in the first place,” he said. “Those CDE complaints were about basic things the district should have done and didn’t. When you get into a formal complaint against the district you have to hire lawyers to protect its interests.”

Ochoa said the $250,000 was five times the $50,000 spent on all legal fees two years ago, with no benefit to students. But in addressing those CDE complaints, he said sometimes there are positive results. Because of one complaint, HSD hired a second full-time board-certified behavior analyst to work with children who have behavioral issues. He said this will enable the district to help students earlier in order to head off “behavioral blowouts” later on.

“Those psychologists will assess students,” he continued, “which is one of our corrective actions, which is related to the fact the district didn’t assess kids for special needs. When you have five school psychologists, they can’t assess kids at 10 different schools and meet timelines. So, you hire the appropriate number of psychologists and we won’t have any CDE complaints pertaining to evaluations.”

Ochoa believes decisions made by Andrew and some members of her staff that led to the investigations were mostly related to a desire to cut costs and run the program more efficiently. The district had not been receiving developer fees, which resulted in a lawsuit between Hollister School District and the county and was eventually settled in secret. He said there were many instances where key staff with experience in special education were not consulted prior to some of the far-reaching decisions being made. He said HSD had closed itself off from the county and SELPA.

“Our district was saying ‘we’re going to handle everything; we don’t need your assistance; we don’t need your collaboration,’” he said. “That was a big mistake. In my short tenure here, I’ve found Christine Lompa, the director of [San Benito County] SELPA, and Krystal Lomanto, Superintendent of San Benito County Schools (both of whom were in leadership roles during the time of previous issues), are outstanding colleagues who have a lot to offer, and in some of our more critical and challenging special education cases, they’re directly involved in those meetings and helping us through the resolution process.”

During the last nine months before he took the job, Ochoa said the district was in turmoil. He said when Andrew resigned, she left a landscape of uncertainty and instability. He said decisions about running the district, in general, and special education, in particular, were made with little deliberation or consultation of others with experience in special education.

He said by the time students reach elementary school many already have learning disabilities. He said children need to be assessed in preschool programs such as Head Start or the California State Preschool Program (CSPP) to determine if they require special education services. But it’s a struggle in San Benito County, he said.

“Data regarding preschool options for children in San Benito County is abysmal,” he said. “The number of slots that are available for kids to attend preschool in this community is low.”

Ochoa said preschools receive state funding based on the number of students who show up. At one time, the Hollister School District managed funding for a number of classrooms for preschool students.

“Two years ago, this district gave up those [CSPP] classrooms back to the state,” he said. “The classrooms are here, but they basically said ‘we don’t want to run the program’ because it was not valued. They did away with multiple preschool classrooms to the point that right now the only preschool we operate is our migrant preschool.”

He said the district hopes to reestablish CSPP classrooms.

“That’s part of our three-year plan, to begin talking about that sort of thing because when you can have families coming in to talk to you at the preschool age you accomplish a couple of things,” he said. “We find every kid who has a speech delay; every kid who has an emotional disturbance. We find them when they’re three years old and give them services. We just have to run the program properly—24 kids, one teacher, two aids, and let’s go.” 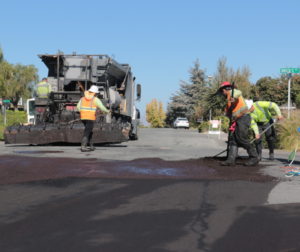 With over $600,000 in selective reserve accounts and after years of heated debate, county service areas get long-awaited maintenance work. 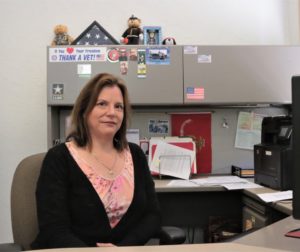 She first became aware of PTSD and Agent Orange as a teen. When her two sons joined the military, she learned what benefits would be available after their service. Now she serves all vets in San Benito County for the Veterans Administration. 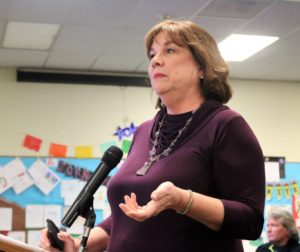