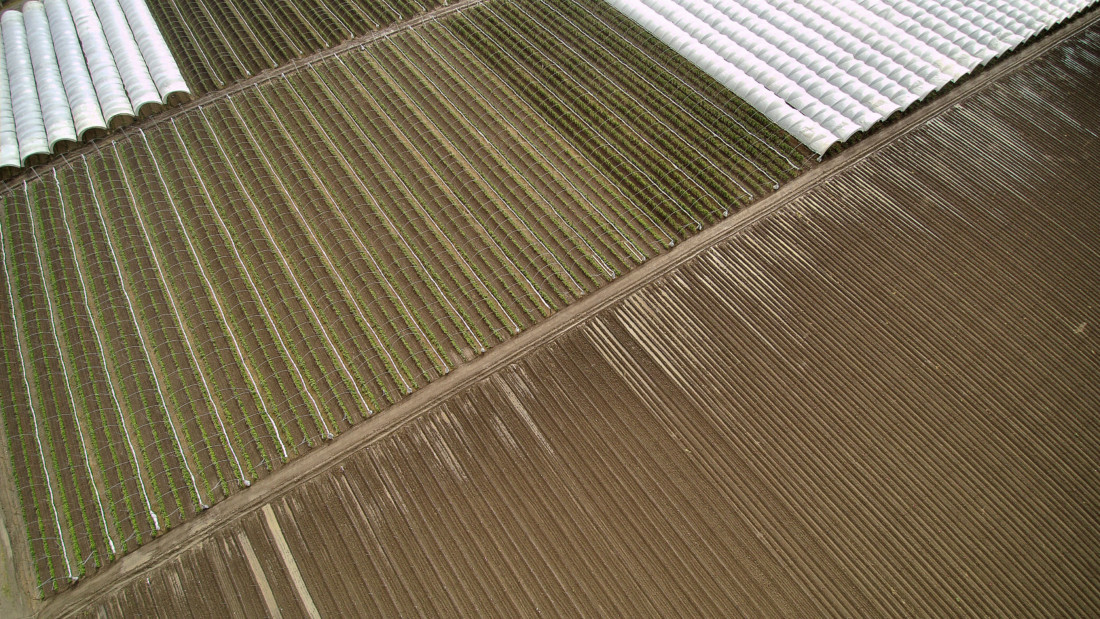 This is the third in a three-part series about prime agricultural land in San Benito County. Read Part One and Part Two.

Drive along Highway 156 into Hollister, and you’ll be greeted with the rolling hills of the San Juan Valley, the verdant fairways of San Juan Oaks Golf Club, fruit stands and rows of lettuce, spinach, garlic, raspberries and blackberries.

It’s anyone’s guess what this drive might look like several decades from now, but one thing is certain: 68 acres of land will be growing crops.

Back in the mid-1990s, the developers of San Juan Oaks had an idea. While the golf course wasn’t going to be built on prime agricultural land, it was surrounded by it. In order to discourage additional development in the area, project manager Scott Fuller arranged for an easement on a 68-acre plot of prime agricultural land adjacent to the golf course.

An easement is an arrangement whereby a property owner relinquishes certain property rights, which are then transferred to another entity for a specific purpose. This purpose depends on the kind of easement and its specific terms.

Easements come in many forms, including utility easements, conservation easements and road easements. In this case, an agricultural easement was used to ensure that the 68-acre parcel was only used for agricultural purposes.

While mitigation projects are often legally mandated by a government agency in exchange for developing a plot of land with comparable agricultural or environmental value, this one was pursued “to show good faith and as a way to acknowledge that they were building next to prime farmland in the San Juan Valley,” Fuller said.

The 68-acre parcel was eventually sold to the neighboring Dobler & Sons, who incorporated it into its existing operations. It’s now used to grow cool-season leafy vegetables and sometimes berries, while the conservation easement is administered by the San Benito Agricultural Land Trust (SBALT).

“Someone from the land trust visits every eight months or so to make sure the land is looking good,” said Steven Dobler, a partner in Dobler & Sons.

The land trust works to conserve regionally significant parcels that sustain productive agriculture, preserve open space, and maintain the rural character of the county, according to its mission statement.

“As a nonprofit entity representing the public trust, we visit the property each year to ensure that the easement funds and contract are being upheld and that no one is breaking the language of the conservation easement,” said Paul Hain, a board member with SBALT.

In San Benito County, regionally significant lands often include prime agricultural land, which has several definitions depending on its context (see Part One and Part Two of this series for more information). In short, prime agricultural land possesses soil characteristics and favorable growing conditions that make it the best land for agricultural production.

The state and county both have several mechanisms in place to keep prime agricultural land in farmers’ hands and ensure that if it’s converted for urban development, it’s done deliberately and carefully.

According to Lynn Overtree of SBALT, funds for a conservation easement are typically raised by “private donations (this would include giving and private foundations like Moore Foundation), public grants (State Department of Conservation, Natural Resource Conservation Service, etc.), mitigation funds, and landowner donations.”

“Farmers are often cash-poor and land-rich, and this generates money that is available to them,” said Overtree. “Typically, the landowners that we work with are motivated by the conservation of their land, but that’s not always the case. Some look at the bottom line and make a business decision to enter into a conservation easement.”

In theory, mitigation projects cap development by ensuring that as prime agricultural parcels are developed, equal parcels are set aside for conservation purposes.

If development projects could only proceed in areas without any prime agricultural land, it would be difficult to carefully plan commercial, residential and agricultural zones. Mitigation measures and transferable development credits provide a way for city planners to concentrate development in one place.

San Benito County has a long history of agriculture, making avoidance of urban sprawl a high priority for county and city planners. Mitigation efforts help them do just that.

These easements “don’t bother us at all,” said Dobler. “We’re farmers, it’s our business, and we’re happy farming land with no outside influence. That’s the goal of these easements: to keep farming the land for farmers.”

Keeping prime agricultural land in farmers’ hands benefits more than just those who cultivate the land. It ensures that food is grown on the best arable land, now and for future generations.

“Society says it’s important to have ag land on which to grow food,” said Overtree. “But it’s not fair to put this burden on the individuals who own the land. We need to jointly carry that burden. If a farmer owns land that we as society value, [agricultural] easements allow us to pay the farmer to keep it that way, and we all benefit. That’s why we’re willing to pass bond measures to fund grants to buy conservation easements: to share the burden of retaining this land in the long-term.”