Peace is a nice concept, but some things are worth fighting for 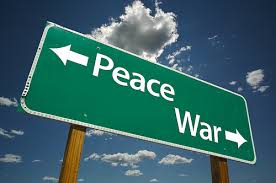 As was the case in America’s Civil War, Word War I, and World War II, some armed conflicts spring from both long simmering resentments and fundamental differences. The truth is that deadly conflict is part of the normal human condition. Armed conflict should be avoided if possible, but it shouldn’t be unthinkable; just the opposite – it should be thought through very carefully because it is not something to enter into casually and the threats always exist.

Armed conflict is terrible, but it is not the worst of all options – there are things worth fighting for, but one has to be very careful when making that choice because it always extracts a steep price.

I was born less than 60 days after the attack on Pearl Harbor and much of the world, including the United States, had been at war with the Axis Powers in some form or another even before Dec. 7, 1941. Very few people will argue that defeating the Axis was a war not worth the effort or sacrifices. Of course, with 20/20 hindsight some will always claim we could have avoided it all; alternate histories are interesting, but they are always speculative.

Things have changed since WWII, but the ravages of war still exist. I’m in my 70s and the some of the world has been in armed conflict during my entire lifetime and I certainly don’t expect that to change before I’m gone. Declared wars are now out of style, but that is meaningless – the killings without declarations are merely a rose, or in this case poison ivy, by another name.

Humans are tribal animals who generally prefer people just like themselves and sometimes they want something another person or tribe has. That’s a poor excuse for conflict in the modern world of communication, trade, and technological solutions, but it still exists. On other occasions we humans have a religious or political belief that we consider so good we can hardly wait to force someone else to enjoy its pleasures as we do. Wars of conversion, as I call them, usually do more harm than good.

To be fair, the United States has engaged in more than a few armed and unarmed conflicts of conscience, but it always helps to stir our conscience when something of intrinsic value is also at stake. That is why we are always ready to defend oil-rich regimes we hate and sometimes only look upon genocides in places like Rwanda from afar – not our business. Protecting others from aggression or genocide can be justification for armed conflict, but one must be sure that the result is a net plus; it isn’t if we are merely going to leave a different, but equally evil, chaos behind.

While you are sending greetings wishing for “Peace on Earth” in the future take a few moments to think about those who have dealt, or are dealing, with the world as it exists and the loved ones they have left behind.