Father Miguel Hidalgo ushering in the fight for Mexico's independence. Courtesy of banderanews.com. Cesar Chavez at the signing of the Giumarra contract, Delano, California, 1970. Courtesy of the Walter P. Reuther Library.

Yesterday, Sept. 16, was historic for several reasons: The second Republican presidential debate was held; Mexico celebrated its independence; and 50 years ago, Cesar Chavez led his fledgling union in a grape strike 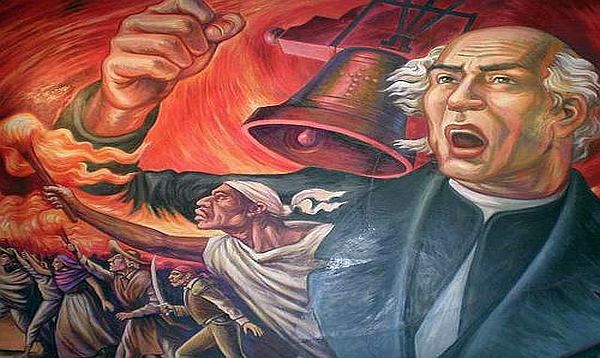 Father Miguel Hidalgo ushering in the fight for Mexico's independence. Courtesy of banderanews.com.
×

The second Republican presidential debate, hosted by CNN on Sept. 16, was hyped by the network like a heavyweight bout. “Round 2”, “the gloves will come off,” and “this night will not go quietly” are some of the sound bites viewers have been pummeled with for the last several weeks.

There’s no doubt that front-runner Donald J. Trump would come out swinging, hoping to land his punches squarely on the jaws of his opponents, while showcasing his repertoire for crassness and narcissism—qualities that often define a champion pugilist not an American presidential hopeful.

Latinos, including myself, watched as Trump and some of the other candidates touted their solutions for immigration reform, like building an impregnable wall between the U.S.-Mexico border, amending the 14th Amendment to the U.S. Constitution, and tracking individuals like a two-pound package.

As the bell rang signaling the end of each round of the debate, I thought about the church bells that a creole priest from Dolores, Mexico rang on this date in 1810, ushering in the fight for Mexico’s independence.

Father Miguel Hidalgo challenged his parishioners to go toe-to-toe with the Spanish Crown—a battle of biblical proportions, pitting a David versus a Goliath. For nearly 300 years, the Spanish casta system upheld social, political, and economic privileges based on birth and skin color.

Hidalgo was eventually captured, defrocked by the Catholic Church, and executed by a firing squad. But the fight for self-government continued for 11 years after his death.

Mexico became a free independent country in 1821. Since then, political ineptitude and corruption has stymied democratic institutions and economic growth, while the country’s recent history has been marked by drug cartels that commit acts of domestic terrorism with impunity. For those with few options, the Land of Opportunity offers hope.

Between rounds, I was reminded of what occurred 50 years ago to the day in Delano, Calif., when Cesar Chavez, a soft-spoken labor organizer of farmworkers, warned his ranked and file of the the dangers of joining a week old grape strike. Hunger, arrests, and possibly death awaited his membership should it leave the fields, substituting their farming implements for picket signs.

The debate was held at The Ronald Reagan Presidential Library. As California’s governor, Reagan, showed his support for the grape strike, and its ensuing boycott, by eating a handful of grapes.

Despite Reagan’s opposition, Chavez and his union achieved victory in 1970, as grape growers signed contracts that guaranteed humane treatment and fairness in the fields. In the years since, the UFW’s membership has dropped dramatically and its clout in the agribusiness industry has dissipated like the Central Valley’s dust.

Ironically, Chavez, like Trump, supported deporting undocumented workers who threatened to steal American jobs. Deputizing his wily and mischievous cousin Manuel Chavez to form a posse, Chavez launched the Campaign Against Illegals, an operation that harassed and, at times physically assaulted, would-be immigrants into returning home.

In 1986, Chavez did a complete 180, sending Dolores Huerta, the UFW’s co-founder and vice-president, to Washington, D.C., where she gained access to a senatorial  dinner and lobbied politicians to support President Reagan’s landmark, immigration legislation that granted amnesty to almost three million undocumented immigrants. As one time adversaries, Chavez and Reagan were now on the same side of a political issue.

Like others who watched the debate, I was hoping for a knock-down, drag out fight, where the one standing was a heavyweight of the ideals and values that Hidalgo and Chavez fought for and that all Americans believe in rather than a paper champion who dances around the issues, raises his arms in pre-mature victory, and delivers body blows at the qualities that make America truly great—freedom, equality, dignity, and opportunity.