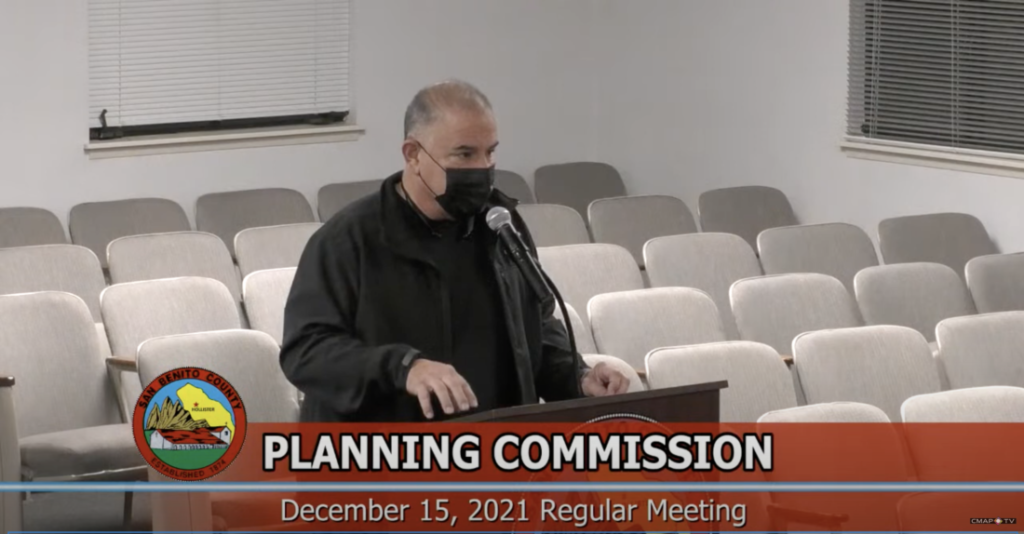 Ivan Villa speaking to the Planning Commission on Dec. 15, 2021. Image from the Youtube video.
×

Five years after it was made legal, and three years after it adopted regulatory guidelines, unincorporated San Benito County came closer to having its first cannabis cultivation facility.

The facility, located on 1180 Riverside Road near Hollister, includes a 3,700-square-foot greenhouse, an 800-square-foot processing area, a 1,500-square-foot office building for up to 10 employees and a retention pond.

Stoney Farms is the first cannabis permit reviewed by the county since it adopted its ordinances in 2018. In November, the county changed its cannabis regulations to allow outdoor cultivation and simplified the application process in hopes of attracting companies in that industry.

According to the California Department of Food and Agriculture, there were 6,235 active cultivation licenses in 2020, with Humboldt, Santa Barbara and Mendocino counties having the most licensees.

The county on Dec. 14 moved to reduce the cannabis business activities tax rate for commercial cannabis outdoor cultivation from $5 to $3 per square foot.

One concern about the Stoney Farms project was environmental, specifically the amphibian presence on the property. Applicant Ivan Villa said there have been two environmental studies conducted and that an environmental consulting firm has been working on mitigation measures.

“We do have some steps put in place that if we do find that there is the salamander, or the burrowing [owl] or anything that they found critical, we’re to stop, report with staff,” Villa said.

According to a Planning Commission staff report, a mitigation measure limits annual construction activities from June 1 to Oct. 31 in an effort to protect amphibian species. But because there are other mitigations included that would “adequately account for on-site amphibian presence during a longer window,” staff recommended extending the construction period to April 15.

Villa said if he were allowed to start construction earlier, all the earth-moving phases would be completed by the Oct. 31 deadline.

Associate Planner Michael Kelly said the Stoney Farms greenhouse will allow natural light during the day and the roof would be covered at night to keep the artificial light inside the facility. The facility is also designed to keep cannabis odors contained.

According to the agenda packet, Villa first applied to have only manufacturing for cannabis oil production and packaging but later changed the application to only include cultivation. It also states the project complies with setback requirements for off-site residences, residential zoning and sensitive uses, though it’s within 600 feet from Brigantino park.

“The approximately 550-foot distance between the subject property and Brigantino Park lands at their closest points can be treated as acceptable for the park’s lack of specific design or identification for minor-oriented play, athletics, and assembly activities,” the staff report states.

The report notes that both properties are separated by a steep hill. It also states that concerns were brought up on Oct. 20 when the Planning Commission first held a public hearing on the project about theft, trespassing and the need for additional law enforcement to patrol the area.

There were no public comments about the project at the Dec. 15 meeting.