Nurses describe a windfall of support including food and protective equipment. 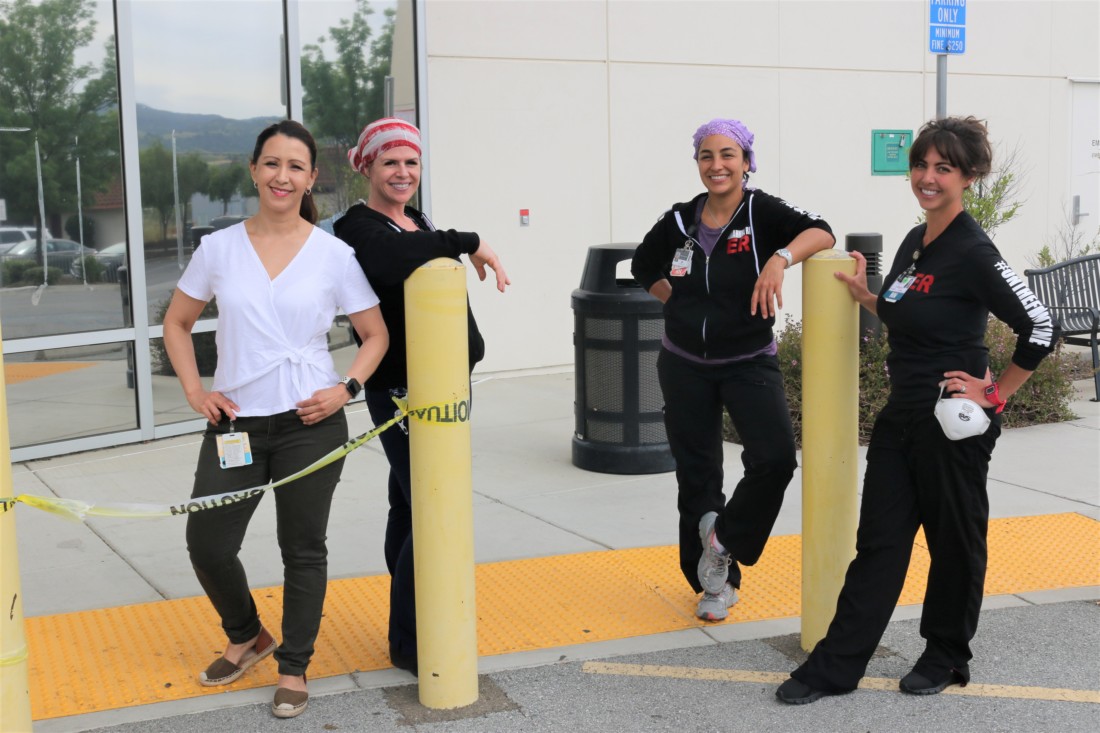 RNs Cindy Dalcin, Courtney Parrinello, Ariana Sanchez and Laura Brigantino told stories of how the community reached out in support and gratitude during the COVID-19 pandemic. Photo by John Chadwell. 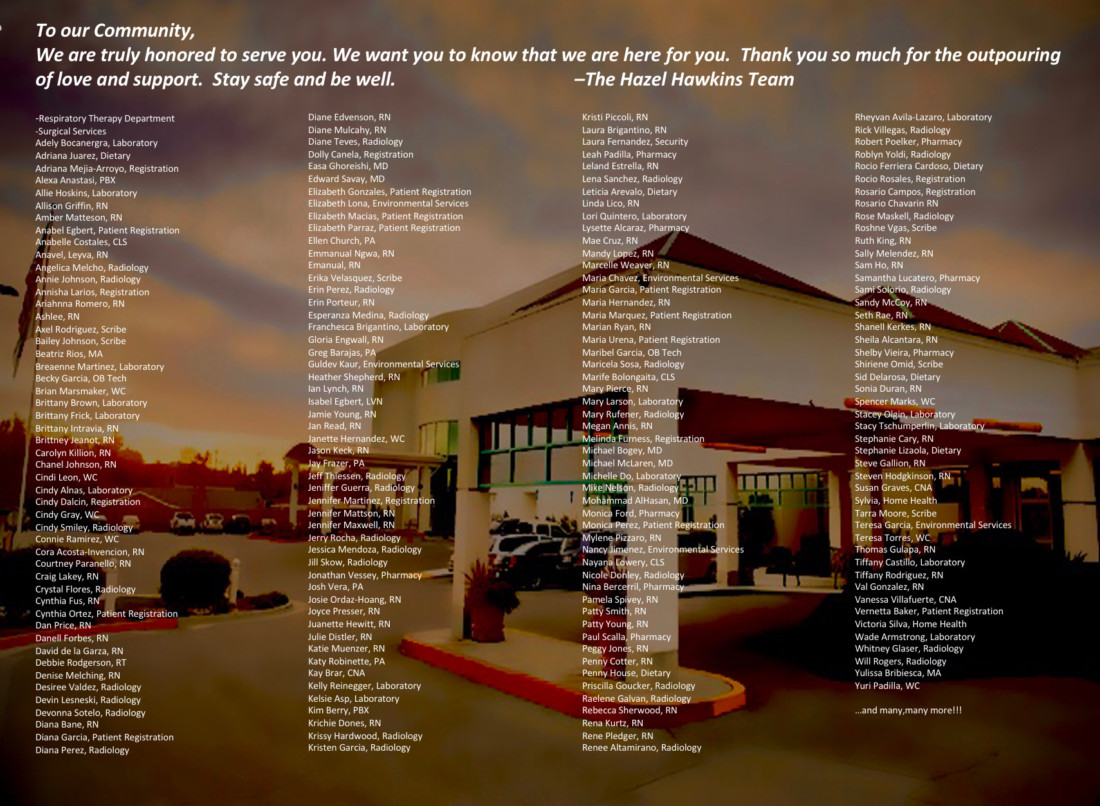 There were actually too many names to include everyone on the letter. 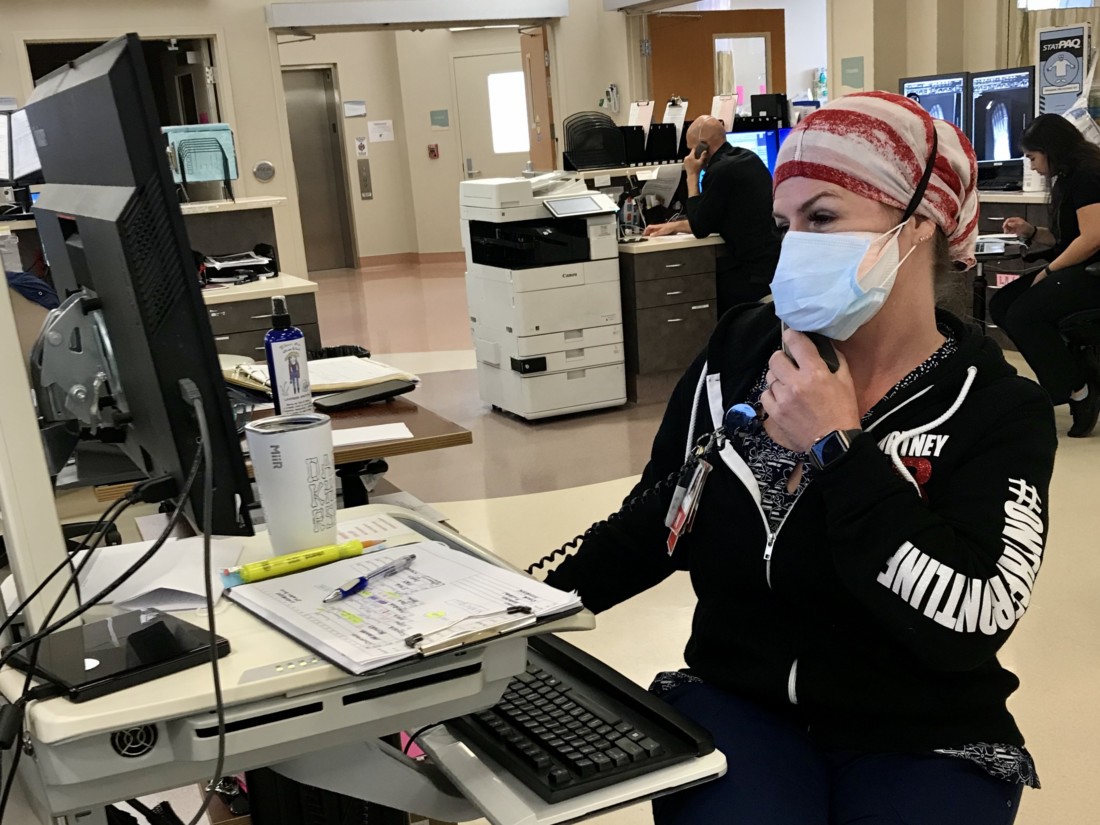 Charge Nurse Cortney Parrinello said she has never felt so safe working at the hospital. Photo provided by Laura Brigantino. 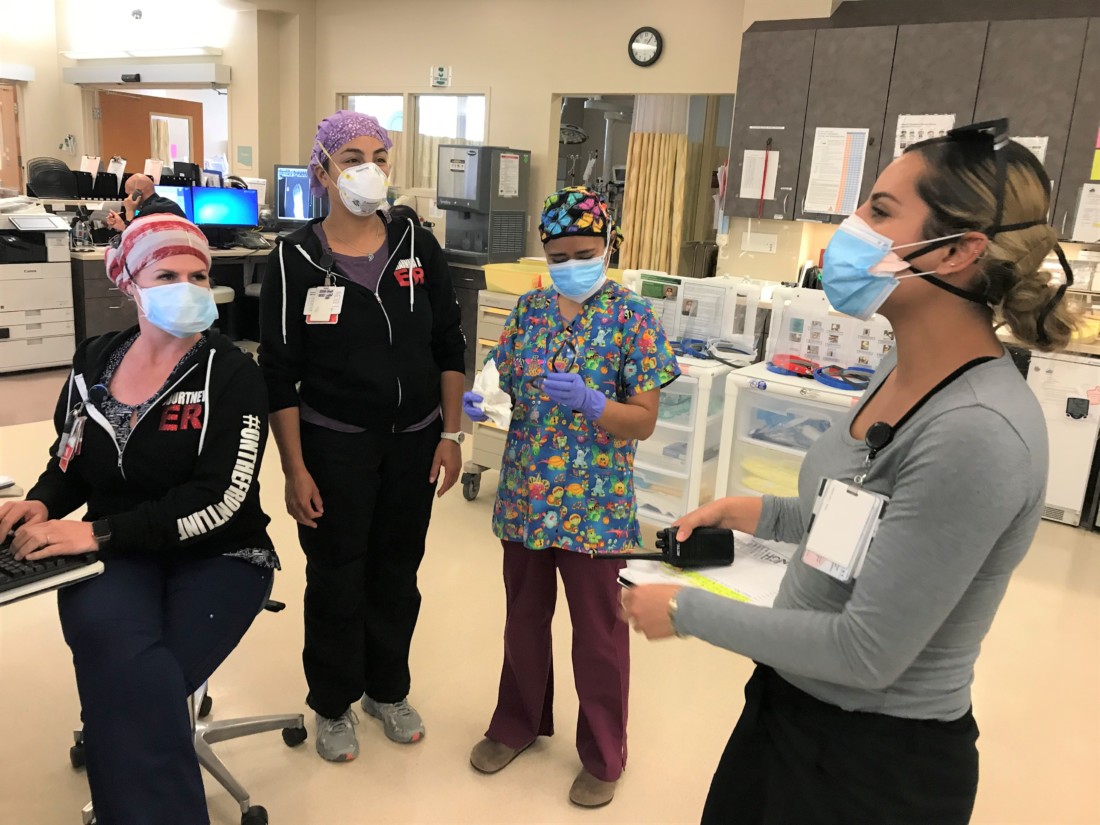 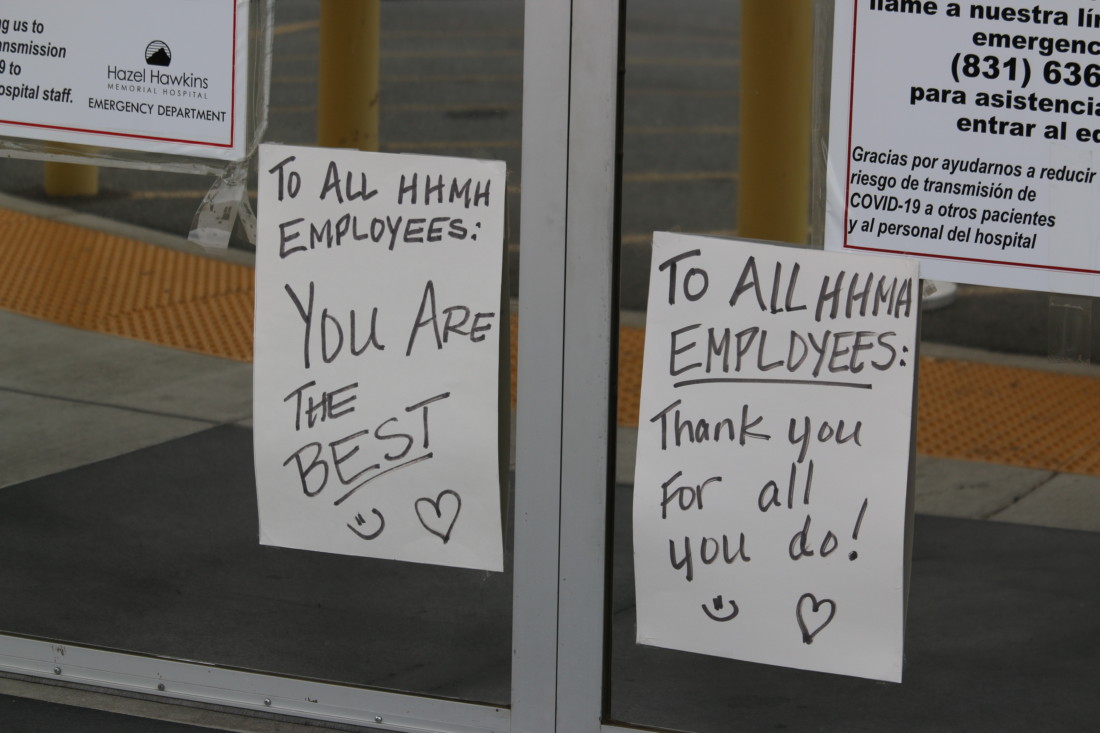 Community members have brought in food, safety supplies and put up signs to show their gratitude to the staff at Hazel Hawkins. Photo provided by Laura Brigantino.
×

On April 25, a love letter of sorts went out over social media to the community from over 100 Hazel Hawkins Memorial Hospital doctors, nurses and staff thanking residents for their support through gifts of food, face masks, and phone calls.

The letter was short, but full of gratitude: “To our community, we are truly honored to serve you. We want you to know that we are here for you. Thank you so much for the outpouring of love and support. Stay safe and be well.”

Laura Brigantino is a registered nurse who’s worked at the hospital for six years. She said every time she goes into the emergency room, “there might be a box full of homemade masks or there’s food for the nurses, or face shields are being made, letters are sent, signs are put up. It’s just constant. We did not want that to go unanswered.”

The local ER nurses thought about what could be done to say thanks for the community support.

“We thought maybe we could write a letter and see who wants to sign it,” Brigantino said. “We started with a few ER nurses because, honestly, we’ve become spoiled by all the stuff coming to the ER. Then patient registration and other departments wanted to get in on it. It just snowballed and as people saw it on Facebook they were saying they wanted to put their names on it.”

On April 29, Brigantino and three other RNs met outside the hospital with BenitoLink to share what they have experienced during the COVID-19 pandemic, and how the community’s support has bolstered their morale.

RN Cindy Dalcin works in outpatient and ER registration. She said the outpouring of gratitude from the community has “softened the hearts of my co-workers.”

“There’s been a lot of changes as we’ve been learning to adapt in order to take care of the patients’ safety,” Dalcin said. “It’s made coming to work a lot safer and lessened the stress.”

Courtney Parrinello, an RN charge nurse, said the best part about working at the hospital right now is that it feels like a team.

“We are all here to beat this virus and I don’t think I’ve ever felt safer at work than I do right now,” she said. “In the beginning, we felt like we had to fend for ourselves, but now, in perspective, we were really prepared.”

Parrinello said she is thankful for “this little island of Hollister,” and the community’s outpouring of gratitude has been a humbling experience.

“We get calls every day from people asking ‘what can we do? What can I bring you?’ There’s been food and coffee,” she said. “I’ll never forget this little lady, she was so cute, she had a small package of wipes she got from Target, and there were two left from her little four-pack. She brought us her two little packets of wipes because she was so concerned for us. I cried and told her she needed it more than anybody.”

“Working together as a community has been something I’ve noticed from the beginning as everyone came together,” Sanchez said. “Not only just us, but those who were handing out food to people who lost their jobs and couldn’t afford to put food on the table for their children. It’s great to know that we live in a community that works together to get us through this.”

Parrinello shared the story of a woman who called her every day about getting the results of her COVID-19 test.

“Every day, we would talk and just have the best conversations,” she said. “Then one day she finally came into the tent to get retested and I got to meet her. She recognized my voice through the iPad. She gave me an air-hug and blew a kiss to me and said, ‘I can’t wait until this is over so I can give you a real hug.’ It was so cute.”

Brigantino chimed in, “She lit up. As soon as she heard your voice. She called out ‘Courtney!’ She was so excited. It’s so amazing as you form these connections because everybody is fighting the same battle and it’s so awesome how so many people are sending so much love. We love being here.”