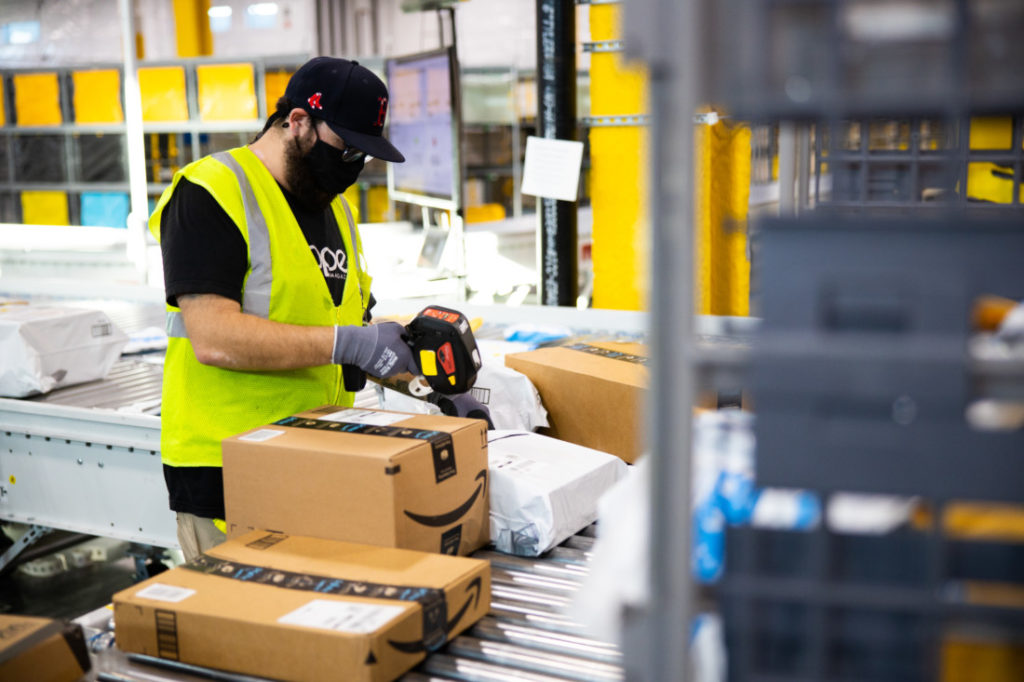 When the new Hollister Amazon facility opens in September, it's expected to provide several hundred jobs in administration, shipping and delivery. Photo courtesy of Amazon.
×

In four months, one developer’s project off San Felipe Road in Hollister went from application with the city to a fast-tracked Planning Commission approval. Construction began soon after, but it wasn’t until March 12 that officials confirmed Amazon was involved.

Though an Amazon spokesperson told BenitoLink on March 11 that the company will lease a site—now under construction south of Flynn Road—that will provide hundreds of jobs at “competitive rates,” the public was not included in Hollister Planning Commission discussions over the new delivery station and its related impacts.

The $50-million project, according to Marc Fontes, director of the Economic Development Corporation of San Benito County, was discussed and approved at the Jan. 28 Hollister Planning Commission meeting, but only after Commissioner David Huboi recused himself because Ken Lindsay, one of the developers involved, was a client of his architectural firm. None of the other commissioners asked Abraham Prado, interim development services director, who the tenant of the facility would be.

On March 8 and 9, Huboi spoke with BenitoLink and said he did not know that the tenant of the approximately 130,000 square-foot building was Amazon, but wished one of the other commissioners had asked because of the 15-day period after approval in which members of the public could have asked for an appeal of the decision. He said by not revealing Amazon was involved, commissioners may have prevented anyone who might have objected from registering an appeal.

When BenitoLink broke the news story on Feb. 26 about the delivery station, neither Mayor Ignacio Velazquez nor City Manager Brett Miller would disclose that it was Amazon.

“Sometimes companies try to keep it from getting into the public domain because they may be fearful there might be a backlash or some type of resistance,” Huboi said on March 9, adding that he was concerned about the public not being made aware that Amazon was involved. “It doesn’t seem right to me. I think the public had a right to know.”

The city approved a tentative map in 2001, Huboi said, and the developer did not have a specific project in mind then. Since the site had also passed its environmental impact report when the developer came to the planning department with the plans for the building last September, it did not have to be approved by the City Council. The city fast-tracked it through the planning department, and allowed construction to go into overtime hours—beyond 6 p.m. and on weekends—because there are no homes nearby; the building will be up and running by September, according to Prado.

“The City of Hollister Planning Commission approved a site and architectural application for a delivery station by Panattoni Development for the property at Citation Way within the M1 Light Industrial Zoning District of the city of Hollister at its regular meeting on Jan. 25,” Prado told BenitoLink.

Regarding concerns over how a 24/7-package delivery operation involving hundreds of semi-trucks and vans would affect local traffic, Miller told BenitoLink, “There was a fair share analysis [see PDF] for that project, which included upgrades to the intersections at 25 and Flynn, and Flynn and San Felipe.”

If parking spaces are an indication of how many delivery vans may eventually serve the new facility, the meeting’s staff report states that there will be 710 parking spaces for vans. Initially, though, the report stated that 190 vans would deliver packages from the facility each day. The city expects vans to eventually be converted to electric-powered vehicles. The report also states there will be approximately 18 semi-trucks delivering packages during each 24-hour period.

An environmental impact report (EIR) for the site was certified by the Hollister City Council in 2001, according to the staff report. The EIR analyzed effects of potential developments and build-outs of the business park in accordance with the California Environmental Quality Act (CEQA). The city of Hollister determined that an addendum to the EIR was the appropriate level of CEQA review for the current Amazon project. The project reflects the anticipated land uses for the approved subdivision as analyzed in the EIR.

In addition to guaranteeing to make right-of-way improvements on Flynn and San Felipe roads, the developer agreed to pay its fair share of costs of construction of a full intersection with Flynn Road and Highway 25/Bolsa Road, as well as the existing signal that was previously installed at San Felipe Road and Fallon Road. Also covered are acceleration/deceleration lanes for truck traffic on San Felipe Road, Flynn Road, and 25/Bolsa Road.

Mayor Velazquez told BenitoLink the facility would generate approximately $500,000 in property taxes each year, with 68 cents of every dollar going to education and just two cents going to each city, with the remainder divided up between four other entities. He said Hollister would receive the sales tax when San Benito County residents purchase products through Amazon. The sales tax, he said, is based on where the packages are delivered.

Another advantage, according to Velazquez, is that people who work at the facility and live in the area are more likely to spend money locally.

During the Jan. 28 meeting, applicant and developer Steve Beauchamp of Sacramento-based Panattoni Development Company, told commissioners that the “tenant” looks for places where there is a good job base and tends to avoid other areas that have a limited labor pool. He said he did not know how much drivers will be paid, and that some will drive the company vans while others will be independent contractors or app-based drivers comparable to Uber gig workers who use their own vehicles.

Beauchamp said boxes will move through the facility within 24 hours and be delivered over a 50-mile range for local community coverage rather than long distance.

“Those delivery vehicles go out during off-peak hours around 10 a.m. and usually come back in late evening to minimize peak traffic conflicts,” he said, adding that there will be about 13,000 square feet of office space for administration.

“There are manager and supervisor positions in addition to employees in the warehouse doing the sorting, packaging and loading,” he said.

From Prado’s description of the site, it will include more than 300 trees, as well as shrubs, which could indicate some employees will work as groundskeepers.

Amazon spokesman Xavier Van Chau said the approximately 130,000 square-foot building will be used to “power the last mile of Amazon’s order fulfillment process.” The site will help speed up deliveries for customers in the region and reduce long-distance travel.

“Packages are transported to delivery stations from Amazon fulfillment centers, sorted, and then loaded into vehicles for delivery to customers,” Chau said. “The station will create hundreds of full-time and part-time jobs, which will pay competitive rates.”

Amazon has a national starting wage of $15 per hour, Chau said.

“These roles will also offer medical, dental and 401(k) match on the first day, comprehensive benefits and career growth options. The station will provide local entrepreneurs the opportunity to build last-mile delivery businesses through our Delivery Service Partner program, and these small businesses will create driver jobs to deliver Amazon packages in their local communities,” Chau said.

“The company is excited to be part of this project,” he said. “As Amazon continues to grow in California, we want to support the state’s continued economic recovery. Amazon will partner with the city and community members as this project advances.”