Council will discuss what happened at its Nov. 18 session. 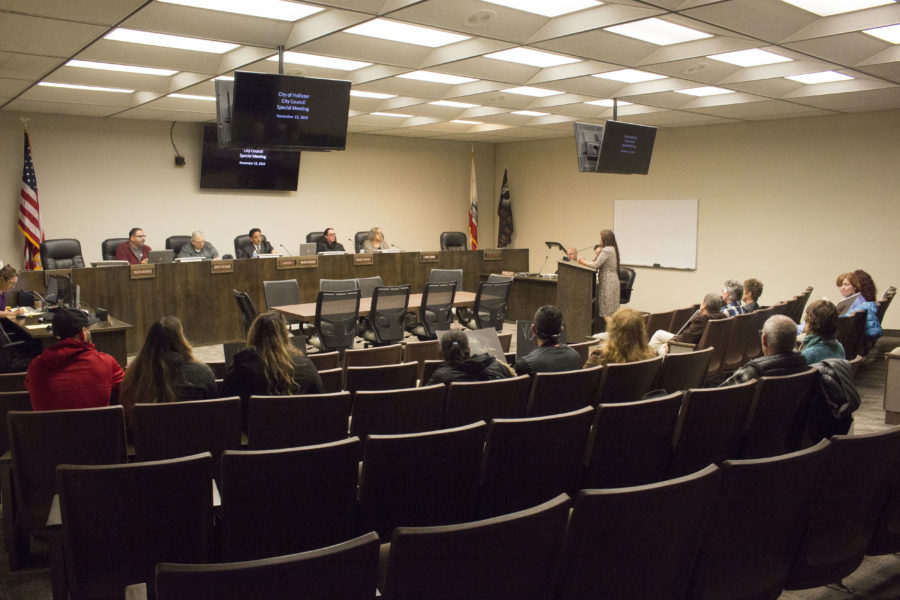 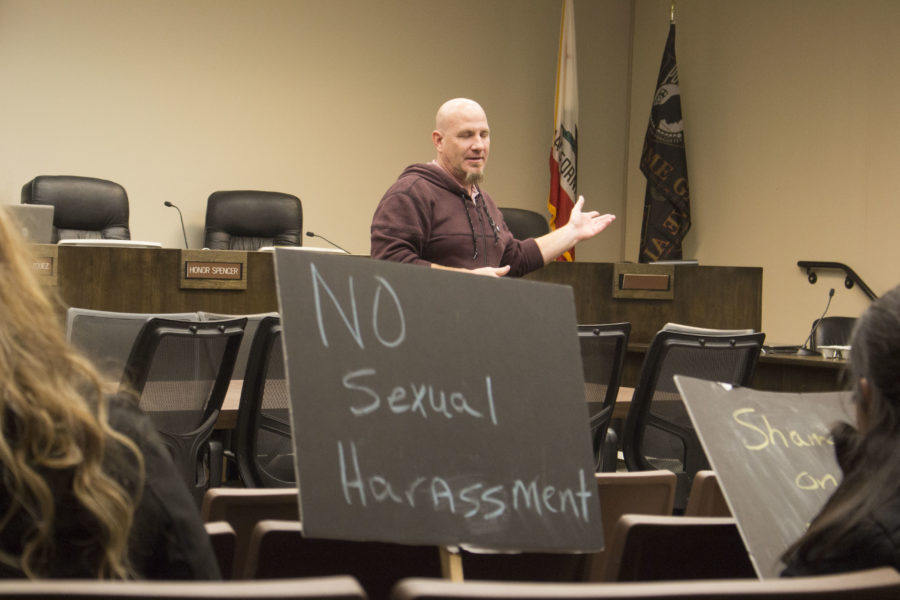 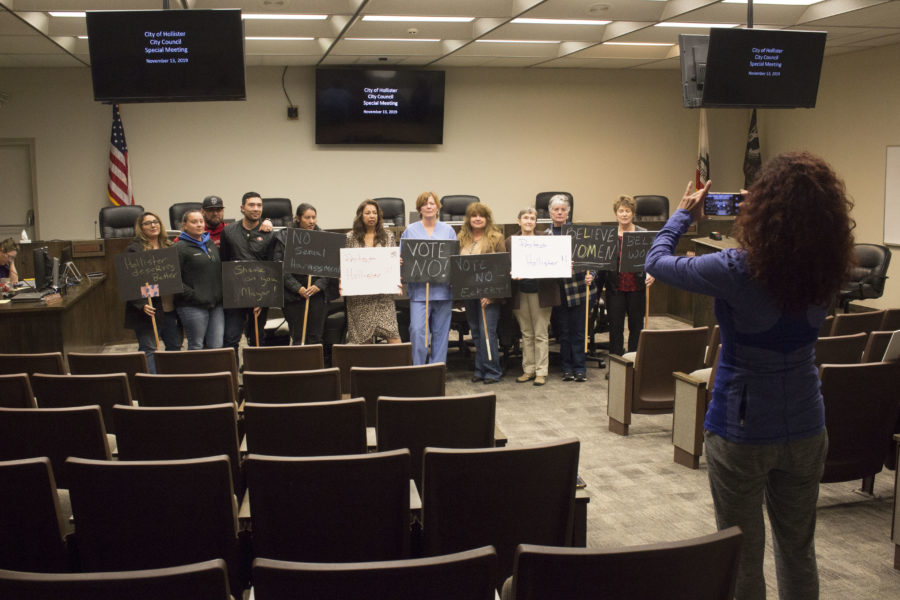 The group of protesters take a picture during the closed session. Photo by Noe Magaña.
×

Updated to include comments from Councilman Marty Richman.

Two days after the Hollister City Council discussed interim City Manager Paul Eckert’s employment in a closed-door meeting, Eckert submitted his resignation, Hollister Mayor Ignacio Velazquez confirmed on Nov. 15. He said more information will be made public at the council’s Nov. 18 meeting. It was unknown who would be acting city manager, City Clerk Christine Black told BenitoLink on Nov. 15, which is also supposed to be retiring City Manager Bill Avera’s last day.

After nearly two hours in a closed-door meeting on Nov. 13, Hollister City Attorney James Epperson said the City Council “gave direction to staff” regarding Eckert, and told the audience that though it was a broad statement it was all he could disclose.

Council members voted on Nov. 4 to hire Eckert on an interim basis, and the hiring has faced opposition from members of the public because of a sexual harassment complaint made against him when he worked in Sioux City, Iowa.

Twelve people with signs protesting Eckert’s hiring attended the meeting, and five made public comments before the council entered closed session. Eckert, who is under a 90-day contract, was also present, but left council chambers before public comment.

Annie Bratford made a brief comment that “it’s time we believe women.” Gavilan College Trustee Irma Gonzalez explained that she had never attended a council meeting before because she never found an item important enough, until now.

“I have several calls from city employees, they’re afraid to speak up,” Gonzalez said. “Why? Because of the very thing this gentlemen has been accused of doing in the past.”

Eckert faced a lawsuit in 2013 from a Sioux City employee alleging she experienced retaliation for her complaints against him for sexual harassment in 2004.

Eckert had been city manager of Sioux City for 16 years before leaving in 2013. Since then, he has held administrative positions in cities including Morgan Hill, Mount Shasta, Paradise, Santa Paula, Foster City and Gridley.

After spending $1 million defending Eckert, Sioux City settled for $300,000, according to the Sioux City Journal.

Elia Salinas, a vocal critic of Eckert, said she had been contacted by numerous residents, businesses, and Hollister city staff who voiced concerns about the council’s decision. She also said that contrary to what Velazquez posted on Facebook, people who opposed the decision were not politically motivated, and that it was about Eckert’s history.

“It is completely disrespectful to the citizens of this city that you made a choice to hire someone without making an independent background check,” Salinas said. She added that CPS Consulting, the search firm hired by the city, represented Eckert.

“The only way the company gets paid is by making sure that this is the guy you hire,” Salinas said.

Councilwoman Carol Lenoir told BenitoLink on Nov. 14 that CPS conducted a background check and provided its results to the city.

“This is all about politics and the endless smearing campaign that she is involved in. Shame. Shame. Shame,” the mayor’s post reads.

After apologizing for her outburst at the Nov. 4 meeting, Catherine Booth Vaughn said, “I’m offended by your posts on Facebook on Nov. 7 where you said it was political. This isn’t political. This is your constituents speaking out to you. If you would have gone onto Facebook before you brought this up to the council and talked to us we would have told you this wasn’t a good idea for Hollister.”

Hollister resident Victoria Hughes, who said she has experienced sexual harassment, reiterated that the opposition was not personal or political.

“It’s not a wise decision when you’re putting what the people in the community are expressing to you, our concerns, and practically ignoring that, saying we are going to do it anyways,” Hughes said. “I raise my children here. It’s a great place to raise my kids, but under this type of government, with someone in his position, that’s frightening for me. Especially as a woman and a mother of two daughters.”

Avera was also asked whether he was going to run for City Council.

“No. I don’t have the skill set to be there,” Avera said before breaking into a laugh.

Councilman Marty Richman reached out to BenitoLink on Nov. 15 with a statement regarding Eckert’s resignation.

“I made a mistake when we started this process,” he said. “I put too much emphasis on technical expertise and experience, and too little emphasis on finding the right leadership for the city. When I realized that I made an error I changed my focus and that changed the results.”

Richman said he focused most on leadership, and that the city needs the right leadership from the city manager more than any other attribute.

“The right leadership is reflected on our values and our culture and it’s very difficult, perhaps impossible, to project that from a few minutes of interviews using prepared questions. It took me several hours of one-on-one discussions with the applicant, and many hours of reading to come to my conclusions. And my conclusions are, all things considered, Mr. Eckert was not a good fit for the city of Hollister, and the city of Hollister was not a good fit for Mr. Eckert.”

The next Hollister City Council meeting is scheduled for Nov. 18.