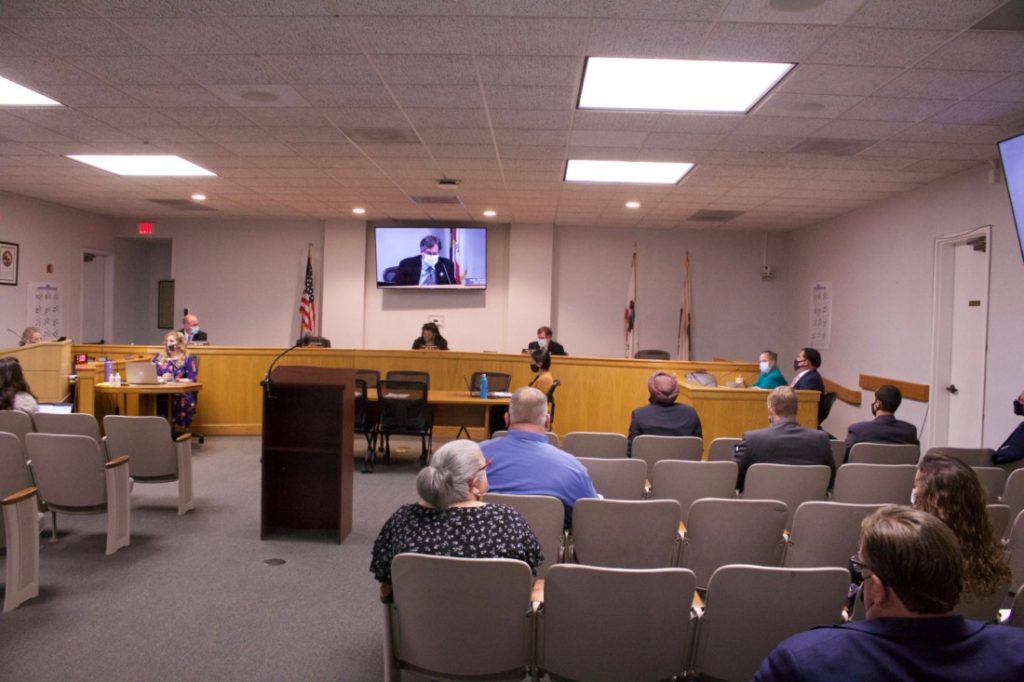 Board of Supervisors on July 27. Photo by Noe Magaña.
×

San Benito County officials scrapped plans Thursday for a homeless encampment near the county jail after businessmen and women warned that it would slow economic development.

In a 3-0 vote, the Board of Supervisors eliminated an earlier proposal to use a 4.25-acre open space site on Flynn Road as a temporary homeless camp and directed its staff to focus on medium- and long-term projects, which could include expanding the current homeless shelter.

“I’m frustrated with the process,” she said. “Each alternative site that we would come up with just to have it blown off the drawing board was just so frustrating. But I’m not ready to upset the business community either.”

County leaders came up with the encampment project idea to relocate as many as 200 people who now live in the San Benito River. On June 8 supervisors approved $850,000 to pay for construction and management of the facility for up to a year.

Several business owners including former supervisor Jim Gillio, now the president of the San Benito County Business Council, said having a homeless encampment near the Hollister Business Park on Technology Parkway was a deterrent to economic development. Among those operating in the area are the San Benito County Sheriff’s Department, Corbin, Teknova and Marich Confectionery.

“San Benito County has been a difficult location to recruit business to in the past and any barrier to business recruitment is a barrier whether we like it or not,” Gillio told the supervisors. “I don’t like it. I don’t like the fact that having unhomed persons near a business zone is a barrier, but it is a barrier and we have to be realistic about that.”

Gillio’s organization recommended that the county sell any unused properties and use the proceeds to expand the existing homeless shelter at 1161 San Felipe Road into surrounding property. The group further suggested carrying out Project Room Key, a state initiative to shelter homeless people in hotels in response to the pandemic.

Cindy Faust, a representative of ZeroAvia told supervisors that the high tech startup, which has been working at the Hollister Airport since 2017, worries about an encampment near the airport because of a history of homeless people starting fires.

“The Hollister jet center has a fueling station there,” the representative said. “We have acreage of dried ground that is one match, we’re all up in flames.”

A homeless encampment fire along the river in April caused damage to communication lines.

Supervisor Kollin Kosmicki supported building the new site but said that, without support from the board, the county has no option but to leave homeless people in the riverbed as they live today.

“If we are going to do this concept, this is literally the only location that works,” Kosmicki said. “If there isn’t a consensus to do it, that’s fine. We need to move beyond what we’re doing now then and just look at the medium- and long-term and we just basically have to let the people do what they want in the riverbed until we have those facilities in place.”