There are nearly 100 homeless living in the riverbed. Where they will end up is anyone's guess, but many will not accept help or go home to family who live in the city. 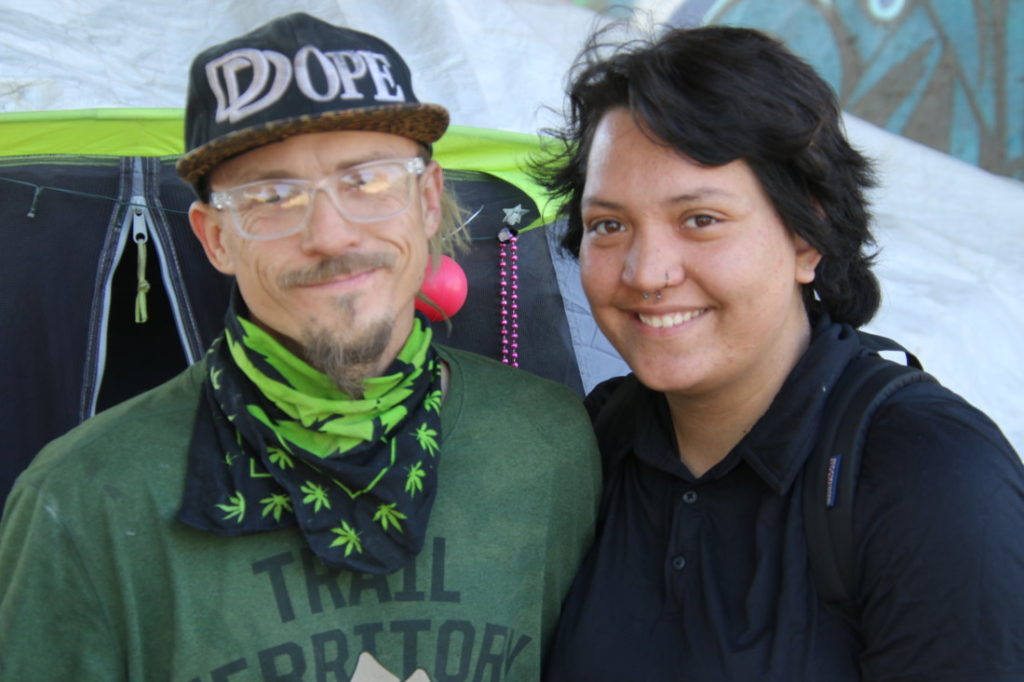 Ariana White and Chad Wicklund have been together over a year. She is pregnant, works full time and doesn't know what will happen when they are forced to move out of the river. Photo by John Chadwell.
×

Ariana White and Chad Wicklund knew they would eventually be evicted. They just didn’t know when. They got the news April 19 when San Benito County Sheriff’s deputies handed out notices of eviction and were told they had 72 hours to decide what part of their possessions they wanted to keep and what was trash.

Because of legal issues regarding the homeless, the process was delayed until deputies returned May 21, when law enforcement and health department personnel came down into the riverbed near San Benito Auto Wreckers along San Juan Hollister Road to tell nearly 100 homeless county residents that in the next week or so they would be told to move along. When that day comes, the team will return with trucks and garbage bins to clean out a four-mile stretch of the riverbed between Hospital Road and the 156 overpass in Hollister.

As Wicklund and White watched from their camp under the bridge on May 21, Sheriff’s Detective Sergeant Bryan Penney told law enforcement and county personnel that they were there only to advise the homeless what they needed to do to prepare for the eventual move and to inform them of county services available. He emphasized that they were to show compassion and to back away if the situation became confrontational.

Wicklund said he and White, who have been a couple for over a year, had been living under the bridge for two months. She works full time and is now pregnant. White said they lost their jobs in Yosemite in March 2020 because of the pandemic. She worked as a lead, the person who fits visitors with snowshoes or skis at the Badger Pass Ski Resort. He was a dishwasher at The Ahwahnee Hotel. When they lost their jobs, they also lost their housing.

White said even though she is from Hollister and moved out of her family home four years ago she does not want to return there.

“We have no place to go,” she said. “We’re trying to get help from the county to find housing or a hotel voucher. I went to Social Services yesterday and applied for Medi-Cal and I have an interview today, but honestly, the county kind of sucks.”

Wicklund said, “The problem is, they’re willing to pay for everything, but nobody is willing to rent. And what is renting, they won’t accept our situation, or they won’t rent to homeless people. That’s what’s keeping us homeless.”

“Plan B,” White said, “is to move further down the river.

The couple have differences of opinion about being homeless. White said she doesn’t like the life, but Wicklund said, “I’ve been doing the gypsy thing for about five years, I’ve been across the country five times. It’s been fun. It’s good to be that way because you can lose it all. Then what?”

As part of the team tasked with helping the homeless, Nancy Abellera, manager of the case management unit of the county’s Behavioral Health Department, was in the riverbed to reach out to those who might benefit from services her agency offers.

“Some may not know those services exist and how we can help them,” she said. “We also want them to know there are resources at the shelter, which is right by Mental Health. So, we try to get people wrapped in as many resources as we can. We’re also coordinating with the San Benito Health Foundation to give them access to the COVID vaccines.”

All of the homeless persons BenitoLink spoke to said they had family connections in San Benito County. Some were working full- or part-time, and only one said he wanted to live with his family.

Patricia Arballo said she has lived in the riverbed for 15 years and has been homeless for decades, going back to when she was 10 years old. She said when she’s forced to move, she will simply “go to another bush.” Asked how she would move her large encampment, she laughed and flexed her arms. “With my muscles,” she said, adding that she has family in Hollister, and they know she lives in the river.

Robert Orabune said he has been homeless for five years. He was not receptive to moving to the homeless shelter, which he was told had 20 empty beds. “I just want to go home to my brother’s,” he said, adding that he is married and that both his wife and brother know where he is. “I can go home if I want.”

A 55-year-old man who declined to give his name or allow his picture to be taken, has a truck and carpenter tools. He has been homeless, off and on, he said, for about 10 years. He admitted his situation is due to drug use and mental issues that he has not been treated for, saying he “just toughs it out.” He has lived under the bridge for 12 months. He said he grew up in Hollister, moved away, and returned last year. He works when he can as a carpenter or landscaper.

“I don’t want to go to work and come back and find all my stuff gone,” he said of the approaching cleanup. “I have a place I can go, but my friend, the homeowner, is a Christian woman who is really cool, but she tries to boss me around. That’s just not me.”

He said even though he is homeless the one thing important to him is to be able to shower each day and he will go great lengths to do so. It may involve sneaking into a nearby church, or driving to Historical Park for a cold shower, or driving to Hollister Hills campground for a hot shower.

“I prefer to be on my own,” he said, “but homeless, no.” When it comes to where he will go, he answered, “Who knows. Some corner of the river, probably.”

The cleanup will also entail removing nearly 30 encampments, 20 abandoned vehicles and untold amounts of debris. Sheriff’s Detective Penney told BenitoLink there were still more legal issues to be worked out before telling folks they had to leave.

According to the Centers for Disease Control, homelessness is a public health law issue. Interim Sheriff Eric Taylor told BenitoLink the nuances in new laws surrounding homelessness are making it difficult to help unhoused persons.

Taylor told BenitoLink the Sheriff’s Office is working in collaboration with the county counsel and the Health and Human Services Administration (HHSA) to determine the best course of action.

“The law creates multiple mandates for us to follow when ‘moving’ or displacing persons from both public and private property, he said. “For now, we are performing routine patrols of the river, asking people to relocate, and are picking up trash.”