With the 31st anniversary of the Loma Prieta Earthquake on Oct. 17, former city manager Bill Avera takes BenitoLink on a downtown walking tour to discuss retrofitting. 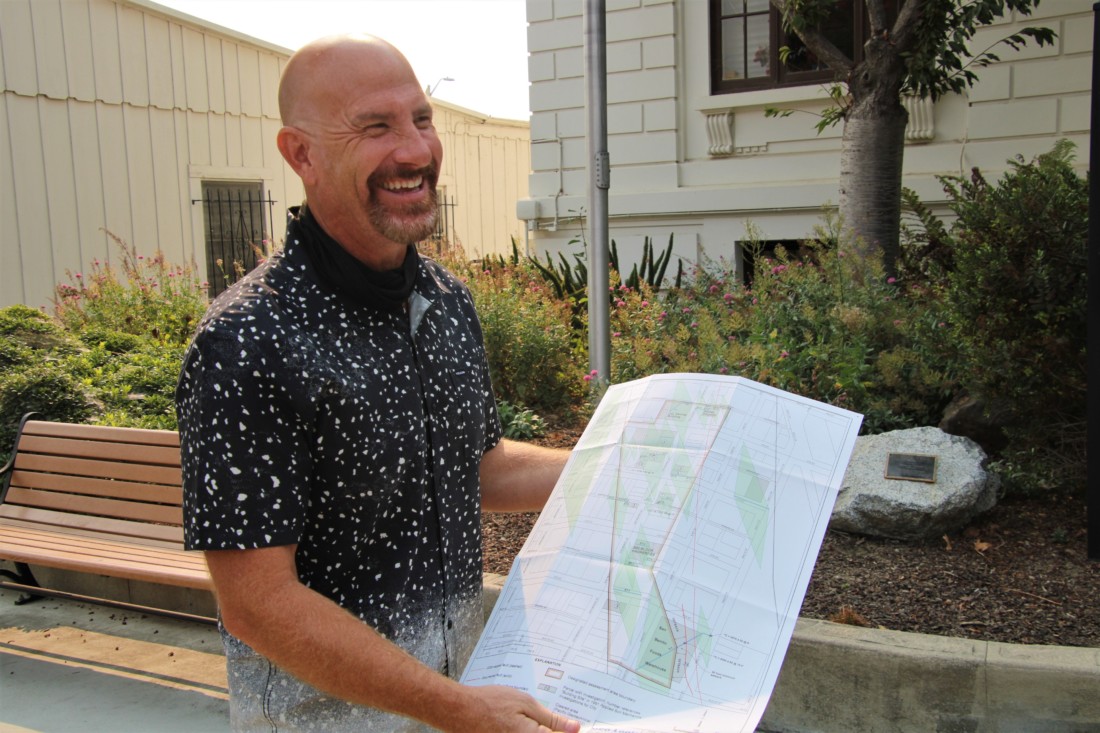 There’s a worldwide movement called the Great Shakeout Earthquake Drill expected to involve more than 17.1 million people in 2020, with a message that comes close to home as the 31st anniversary of the Loma Prieta Earthquake approaches on Oct. 17.

The California Office of Emergency Services recently advised state residents that they can participate in the International Shakeout Day on Oct. 15 by registering to practice “Drop, Cover, and Hold On.”

One thing that is almost certain in Hollister, if you’re downtown when the next big one strikes you may have to drop, cover, and hold on, but you will be a whole lot safer than those who were there in 1989, when the Calaveras Fault shook below San Benito Street and decimated the 400 block, bringing down buildings and knocking homes off their foundations.

Over the ensuing years, retrofitting of business and government buildings has convinced a former city manager and a planning commissioner that at least 60% of downtown will remain intact should another 7.1 or larger magnitude earthquake strike.

Retired city manager Bill Avera took BenitoLink for a walking tour of downtown recently as he pointed out various buildings and how they were originally constructed or retrofitted. The tour began at The Vault, on the corner of Fifth and San Benito streets, which survived the quake with little damage.

Avera said the quake ripped the entire façade off the Farmers Merchant Building on the east corner of Fourth and San Benito streets. He said it was rebuilt in 1992 to look like the former building, but it is essentially a new structure designed to meet earthquake codes at that time.

Avera said shortly after he arrived in Hollister in 1994, work began on the Briggs Building, a two-story parking structure with 10,000 square feet of office space on the ground floor. The intent for the building was to create an economic stimulus to encourage the rebuilding of downtown and accommodate San Benito County Superior Court across the street, Avera said, adding that it was built to survive a 9.7-magnitude earthquake.

“It was built as an essential services structure,” he said. “It is the strongest building downtown because it has concrete pilings under it that go down 75 feet.”

Next to the parking structure, construction is underway for the Community Foundation for San Benito County’s Epicenter. According to Del Curto Brothers Construction Co., they were required to sink four, 27-foot holes filled with rocks as supports for the building at a cost of over $500,000. Even more will be required when the company begins building 24 condominiums and retail stores on the same lot.

The foundation for the Epicenter is being dug against The Vault, owned by Mayor Ignacio Velazquez. The original building from the 1880s was torn down and rebuilt as a branch of the Bank of Italy, founded by Amadeo Peter Giannini in 1904, before being rebranded in 1931 as the Bank of America.

“The last bank moved out in the mid ’90s and then I took it over in 1998,” Velazquez said. “I remodeled it to open The Vault Restaurant. The building is built with reinforced concrete and I believe some seismic work was done in the late ’80s. I also added additional safety items, such as more seismic strapping around the building and a fire sprinkler system.”

Avera said the Old City Hall building where the city’s Planning Department is now located, at 339 Fifth Street; the Holland Hotel which now houses the Hollister House Bar & Grill on the ground floor at the corner of Fifth and San Benito streets; and the Granada Theater at 336 Fifth Street all appear to be built of unreinforced masonry, which can result in injuries and deaths when it collapses onto streets during earthquakes. However, they’re actually built out of poured-in-place concrete which is reinforced, and is far less likely to collapse during an earthquake.

“Fortunately, Hollister didn’t have a whole lot of unreinforced masonry,” Avera said as he pointed to the Old City Hall building retrofitted in 1999. “It was an extensive retrofit. We had to bore into the outside walls and anchored them every three feet. It would have to be a very significant earthquake to make it come down. Everything is now built to survive a magnitude 7 to 9.”

Along the west side of San Benito Street south of Hollister House Bar & Grill, most of the businesses are single story, wood-frame buildings that survived the 1989 earthquake.

The quake extensively damaged the Veterans Memorial Building, built in 1927, separating the entire front facade and columns from the rest of the structure.

City Planning Commissioner David Huboi, who owns Huboi Architecture in Hollister, had an office in Campbell in 1989, where he felt the quake. One of the first projects he worked on after moving to Hollister was the Veterans Memorial Building. Initially, engineers recommended demolishing it, he said.

“Based on geotechnical reports, we put in an underpinning to support the columns and tied it back with a steel framework,” Huboi said. He also helped reinforce several homes in surrounding areas that were damaged. “The older residential section held up better because the quality of materials was much better back then [late 1800s to early 1900s]. You can’t get that kind of quality framing today.”

He said what builders have learned is to convey earthquake forces through buildings down into the foundations by using metal connectors, so the forces are distributed throughout the building more effectively.

“We’ve also learned the value of plywood,” he said. “The older homes didn’t have plywood in the roof rafters. When the plywood is nailed to the rafters it conveys the forces down into the walls where the connectors convey the force down into the foundation.”

Avera said studies must be conducted for every building that falls within the seismic safety zone that runs down San Benito Street in order to determine if they are over the fault.

“You have to do trenching investigations down at least 15 feet so geologists can make a determination if a particular lot is subject to surface rupture,” he said, “because shaking is one thing, but coming apart is something else.”

Huboi said the main stumbling block in retrofitting some buildings along San Benito Street is the seismic zone created by the Calaveras Fault. Every project, whether a retrofit or a new structure, must be approved by a state geologist. He said several buildings—including the old Hazel Hawkins Hospital building on Monterey Street built in 1907 and the current City Hall on Fifth Street, built in 1910 as one of 1,419 Carnegie Libraries around the country—were designed by William H. Weeks and have stood the test of time, including earthquakes.

“Most of the prominent buildings downtown will hold up well during an earthquake, but some of the older buildings still need a retrofit,” Huboi said. “We need to continue strategies for seismic retrofits on some of these older masonry buildings.”

Because it can cost hundreds of thousands of dollars to conduct these studies, most property owners can’t afford to do them. This is why there are some vacant lots and empty buildings downtown.

The last major inspection conducted by the city was done before building Fire Station #1 on the corner of Fifth and Sally streets, which is near the seismic safety zone.

“We were required to do a surface fault investigation,” Avera said. “We had to dig a trench and it cost about $150,000 to do that study. If we would have found the fault, we would not have been able to build an essential services building.”