On April 9, current and former county residents joined Dolores Huerta in San Francisco to celebrate her 87th birthday and to watch a screening of "Dolores: The Movie," a documentary about the civil rights activist 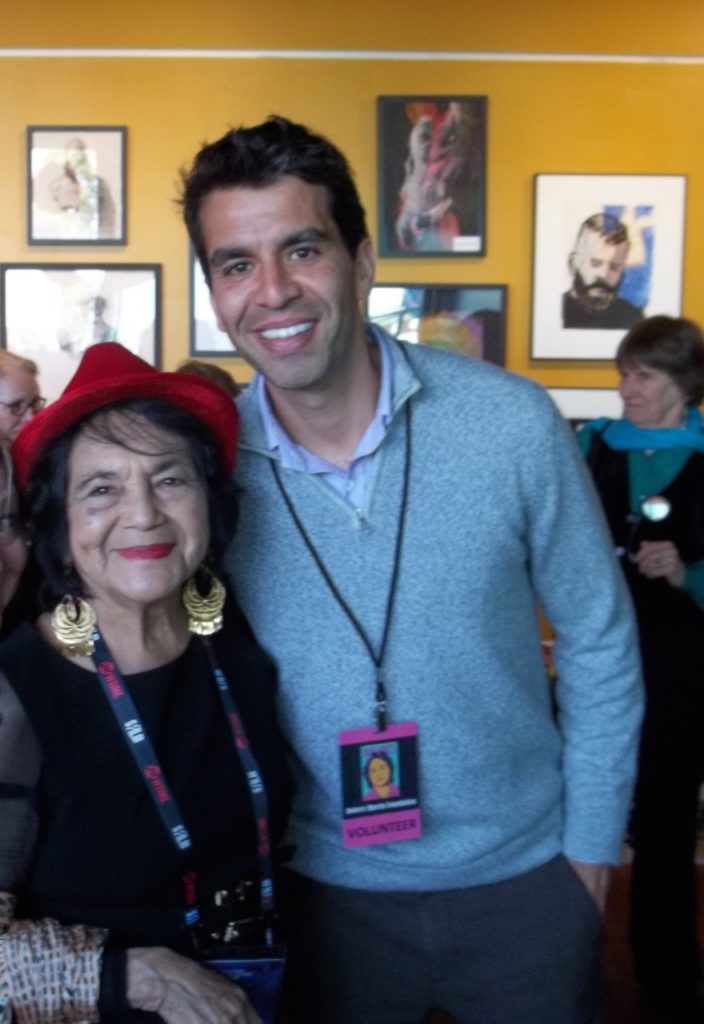 Hollister resident and local educator, Mayra Flores, first met United Farm Workers’ co-founder and civil rights activist, Dolores Huerta, when Flores was a young girl picketing alongside her late father, Servando, outside the former Almaden Vineyards in Paicines. The year was 1967, and the late-labor organizer, Cesar Chavez, had dispatched Huerta to San Benito County to spearhead negotiations on behalf of Servando and his co-workers.

On Sunday, April 9, Mayra Flores was among a score of current and former county residents, including her two adult sons, Robert and Rick Rivas, who joined Huerta in celebrating her birthday and who later watched a screening of “Dolores: The Movie,” a documentary about the 87-year-old “who is among the most important yet little-known activists in American history,” according to a press release.

The birthday reception began at 3 p.m. at the Strut wellness center on Castro Street in San Francisco. Invitees were treated to complimentary food and drink, as they mingled and reminisced about Huerta or talked about the impact she has had on their lives.

“She’s taught me never to give up, and to fight for la causa [the farmworkers’ cause], she said of Huerta, before recalling a few personal moments, including the time Huerta comforted the family following the death of Flores’ father in November 2011.

On the morning of Servando’s funeral, Huerta ate breakfast at the Flores home, sharing stories about her years in the UFW. She later spoke at the burial service, telling those in attendance about Servando’s role in the Almaden strike—an effort that resulted in higher wages, a hiring hall and “vacation and holiday pay,” writes Frank Bardacke in his book, Trampling Out the Vintage: Cesar Chavez and the Two Souls of the United Farm Workers.

Longtime Hollister resident and retired educator, Tony Ruiz, who attended the Sunday event with his wife, Kathy, explained that Huerta’s involvement in the farmworkers’ movement was significant, especially to an ethnic group that considers the nuclear family a source of pride and strength.

“She [Huerta] completed the Mexican family model for farmworkers. Cesar was the husband, and Huerta was the mother,” Ruiz said of the UFW’s co-founders, who despite the still, oft-reported rumors were never romantically involved.

Ruiz confessed that he neglected to acknowledge Huerta’s rightful place among civil rights leaders during his years of teaching History of the Southwest at Gavilan College.

“I didn’t talk enough about her to my students,” he said, adding, “I never gave her enough credit.”

“She’s taught me that by focusing on a goal and working hard together anything can be achieved,” he said.

Near the conclusion of her birthday reception, Huerta thanked her guests, singling out a handful for special recognition, including Rivas.

“Rick is a good friend and I’ve known his family for many years,” Huerta said while standing next to Rivas, who appears in her documentary and who is a political consultant for the Los Angeles-based Equality California, “the nation’s largest statewide lesbian, gay, bisexual and transgender civil rights organization dedicated to creating a fair and just society,” according to its website.

Before departing for the famed Castro Theater, where her documentary was featured as part of the 60th San Francisco International Film Festival, Huerta stated to movie-goers that she hoped “Dolores,” “gives inspiration that we need to continue organizing” in what she described as today’s turbulent, political climate.

“You can cut all the flowers, but you can’t stop the Spring,” she said, adding with her arm raised, “We are the Spring!”

The crowd erupted in applause and began shouting, “¡Si Se Puede!, ¡Si Se Puede! (Yes, We Can!), the popular refrain coined by Huerta during the 1965 Grape Strike.

The creative voices behind “Dolores” are acclaimed musician, Carlos Santana, and Peter Pratt, an award-winning screenwriter and independent filmmaker.

The four-year project was funded by Santana, while Pratt wrote, directed, and produced it.

The film chronicles Huerta’s life from her youth in Stockton to her involvement in the Community Service Organization, where she met Chavez to her decades-long participating in the UFW to her current work with the Dolores Huerta Foundation, a grassroots organization “that is dedicated to teaching civic engagement to everyday people in order to hold their elected officials accountable” explained her daughter and the organization’s executive director, Camila Chavez, earlier in the day.

Archival footage is sprinkled throughout the 98-minute documentary, including a rare, joint-interview with Chavez and Huerta.

When asked why he reached out to then 30-something-year-old mother to join him in forming a farmworkers’ union, the camera-shy Chavez responded softly, “Because she had the faith, drive, and skills to organize.”

Several of Huerta’s female contemporaries are featured, too.

Angela Davis explains that the civil rights era is often erroneously viewed as a movement of disparate parts, when in fact it was full of “intersectionality.”

African-Americans and Mexican-Americans struggled for equality in the 1960s, and Huerta was at the center of that struggle, Davis argues.

Huerta also opened the eyes of those who admittedly were too blinded by their own causes to understand the plight of farmworkers.

“Dolores helped me see what was happening in the fields,” says Gloria Steinem.

But the praise heaped on Huerta is tempered by the personal costs paid by those closest to her.

Holding back tears, several of her 11 children recounted stories of an absent mother who could not be depended on, even for the most mundane of life’s routines.

Huerta admits that “the [farmworkers’] movement became” her “most important child.”

And while her children suffered in her absence, others benefited from her presence, including El Teatro Campesino founder and San Juan Bautista resident, Luis Valdez.

“She was the first general I followed into war,” Valdez says in the documentary, adding that for much of his life he was not a follower. The 1965 Grape Strike changed that.

“I knew that I needed to follow them [Chavez and Huerta], Valdez says.

After the film, Huerta was joined on stage by Valdez, Pratt, and two others. The sold-out audience then sang, “Happy Birthday” to the 87-year-old.

Valdez thanked Pratt for making a documentary that “is alive and is history.”

He then turned to Huerta and said, “I never met a Chicana that was as articulate, strong, and courageous as Dolores.”

Visit “Dolores: The Movie” website. The film will be released nationwide in September.

To learn more about the Dolores Huerta Foundation, visit its website.

To learn more about Equality California, visit its website.