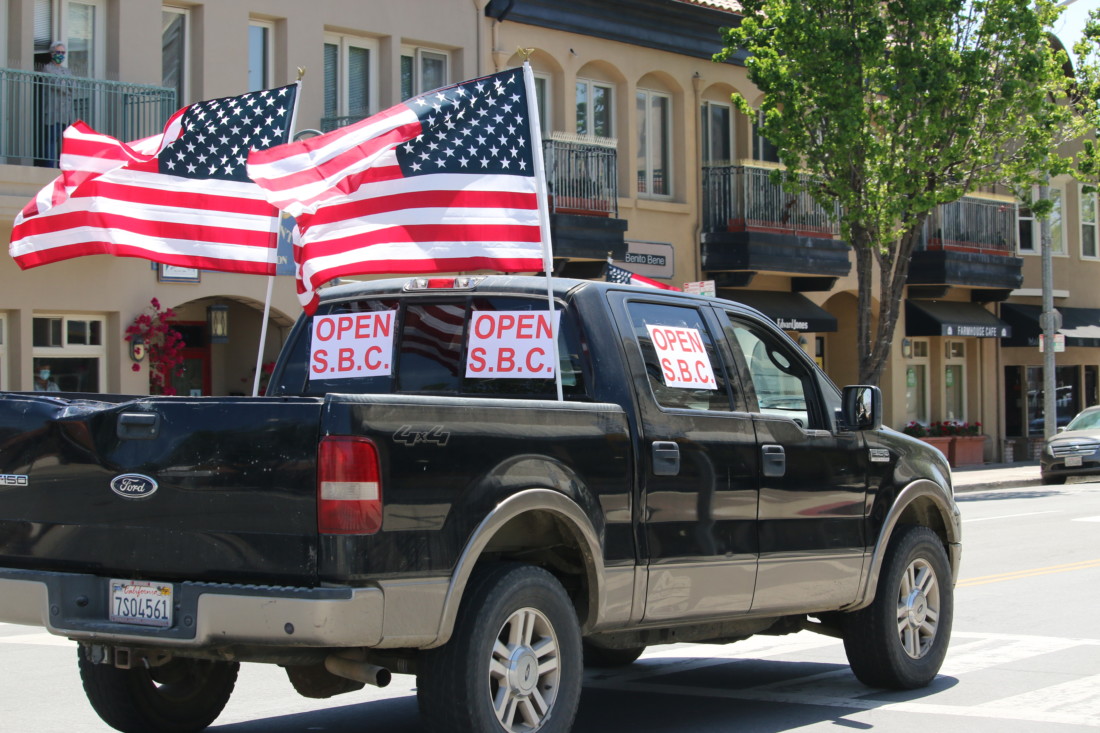 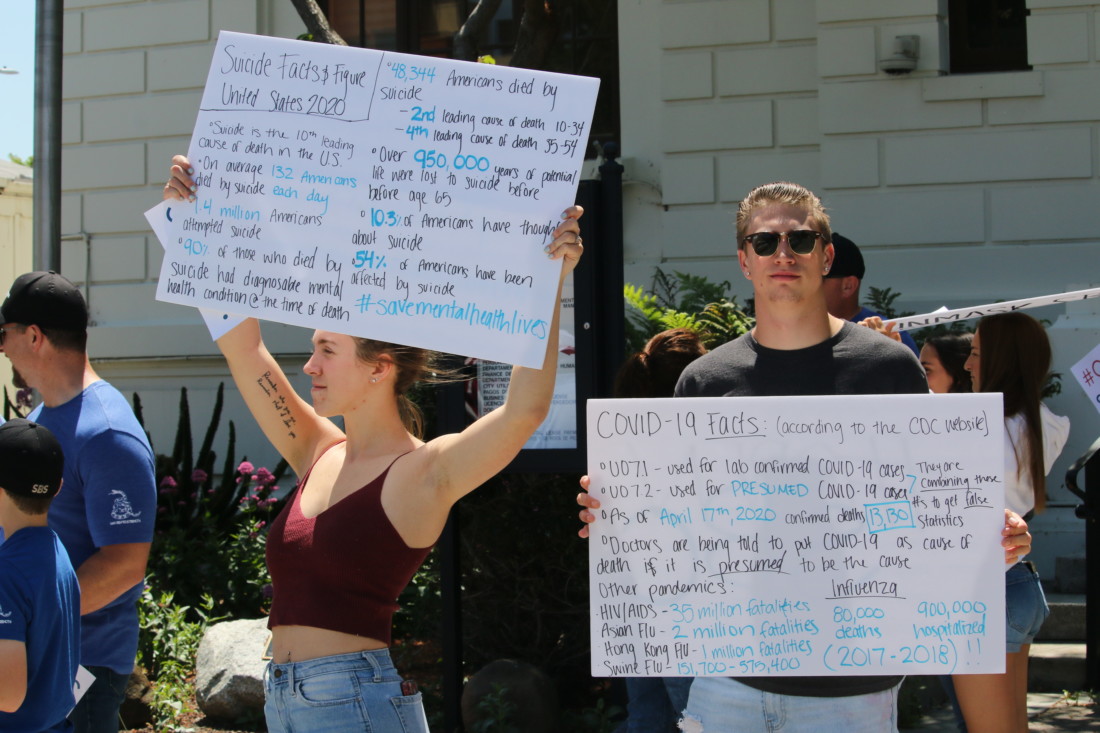 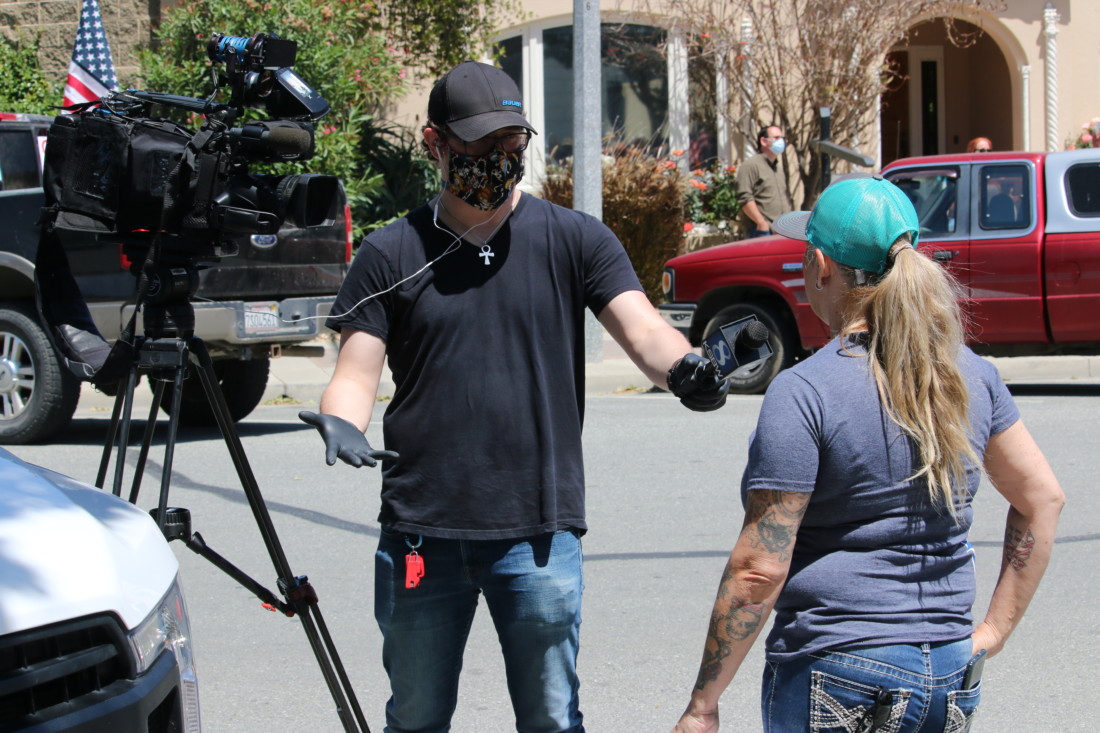 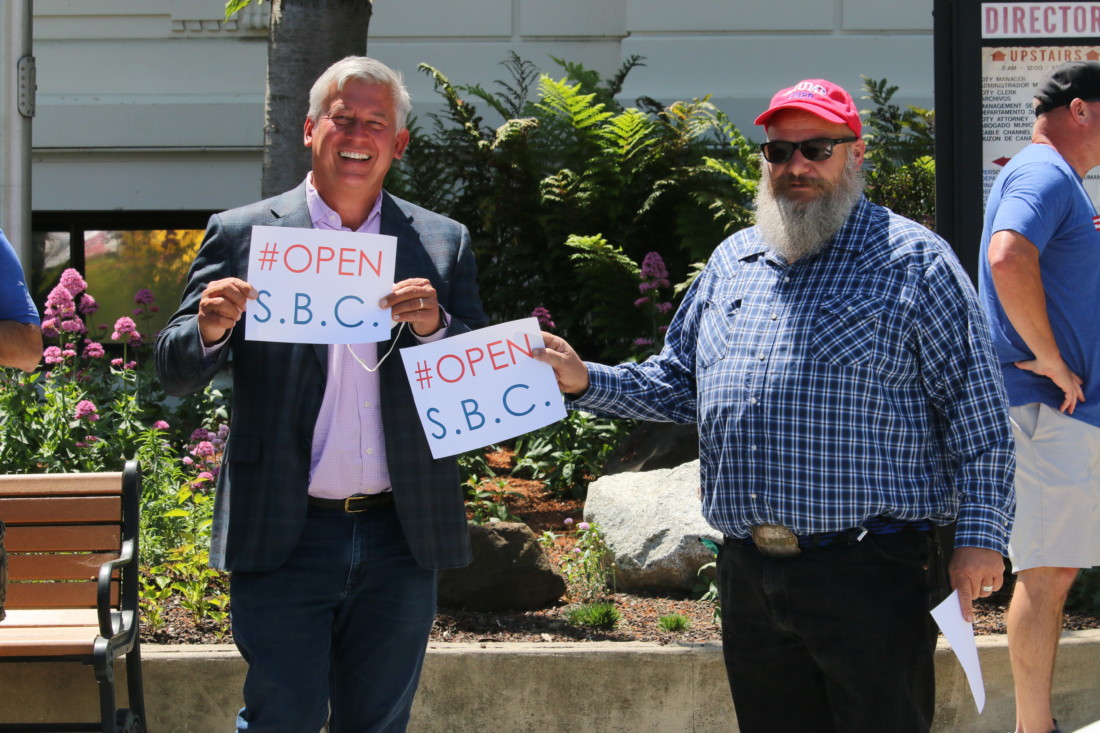 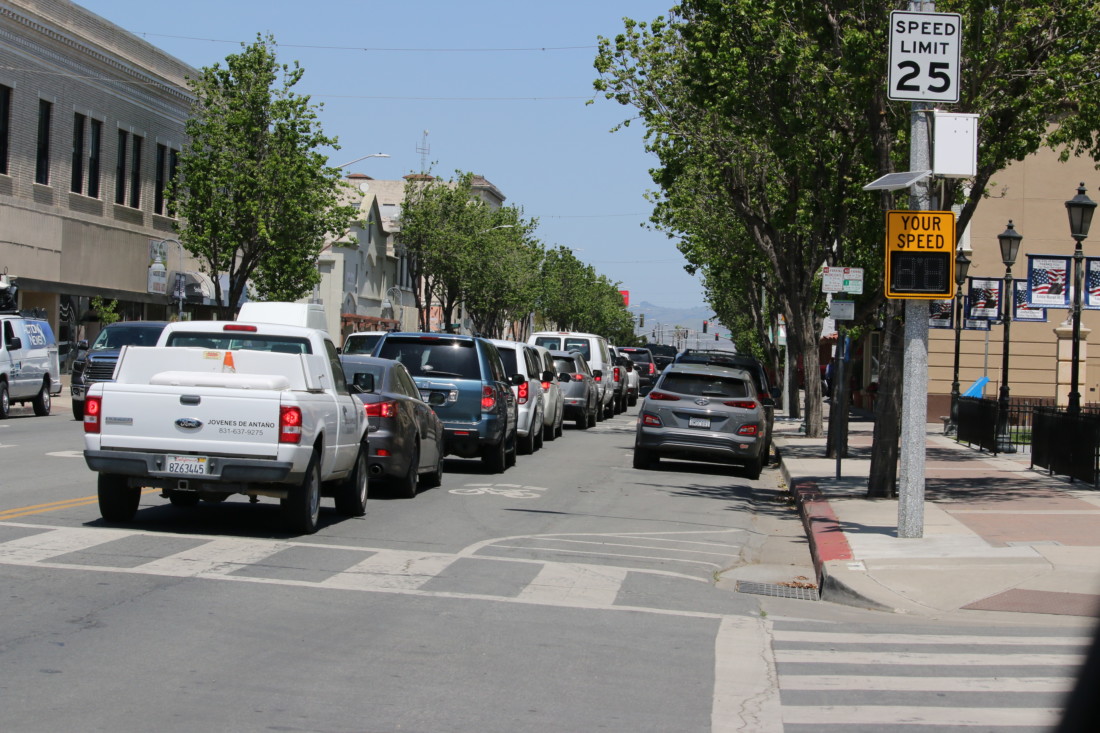 50 business owners and residents gather to speak out against shelter-in-place order. 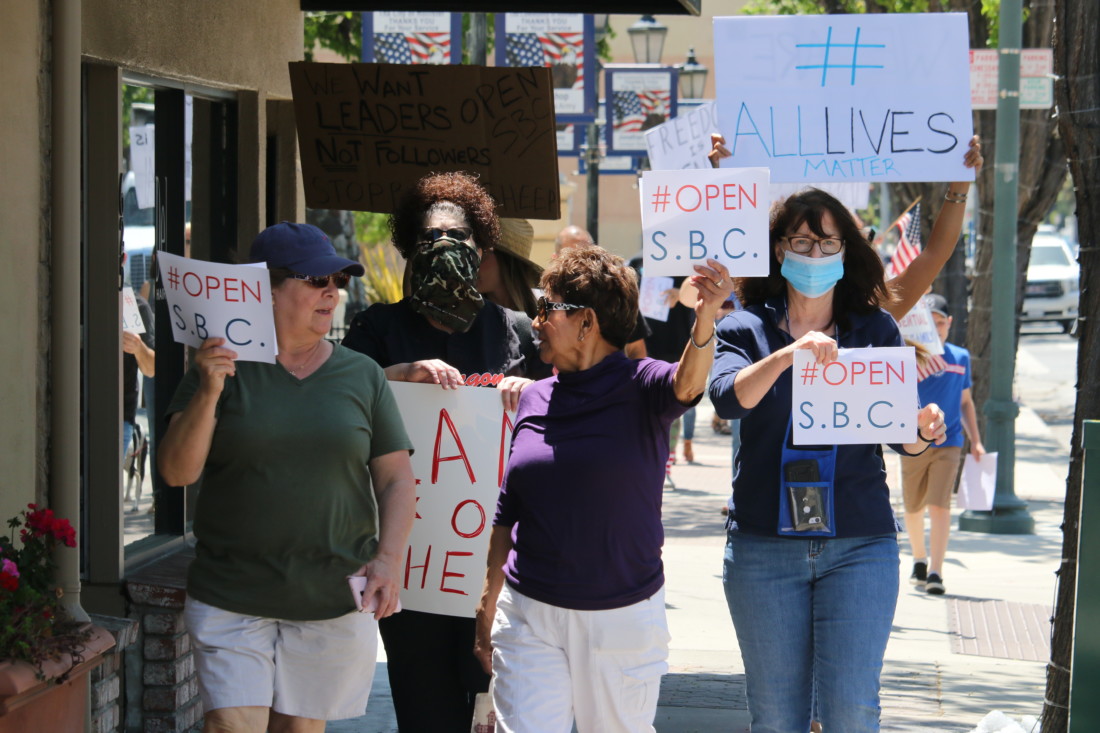 Participants in the #OpenSBCRally marched along San Benito Street on May 1. Photos by John Chadwell. 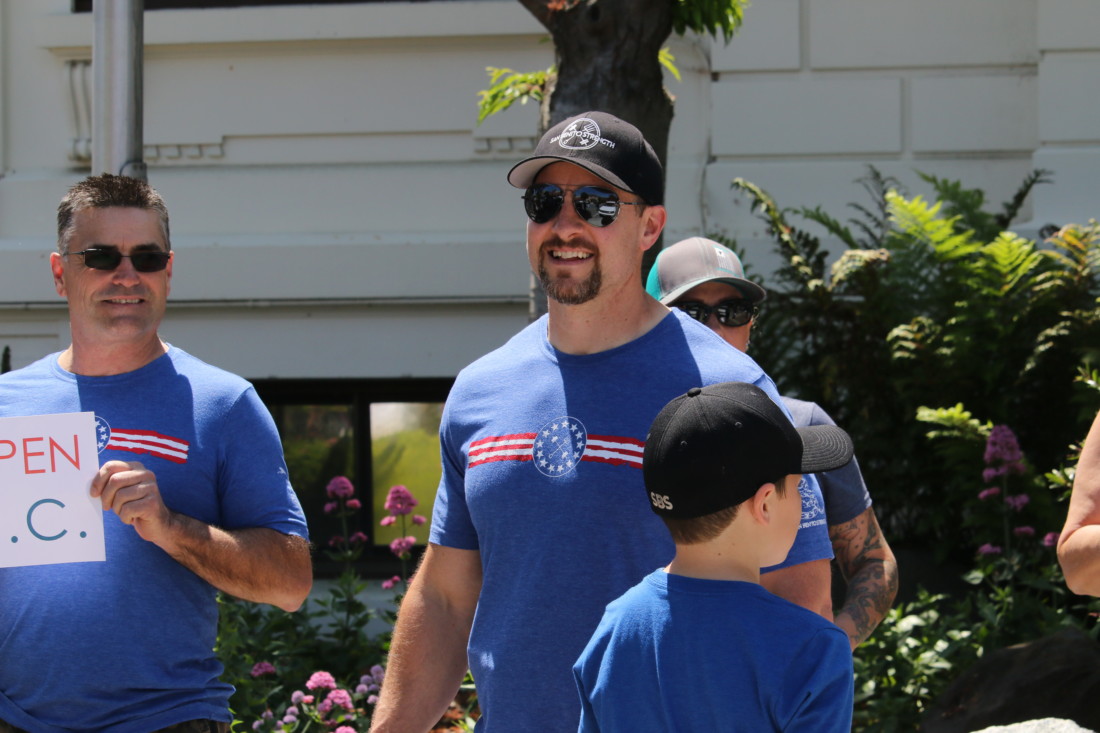 San Benito Strength owner Hunter Cuneo claimed he was harassed by law enforcement for meeting with clients in a private location. 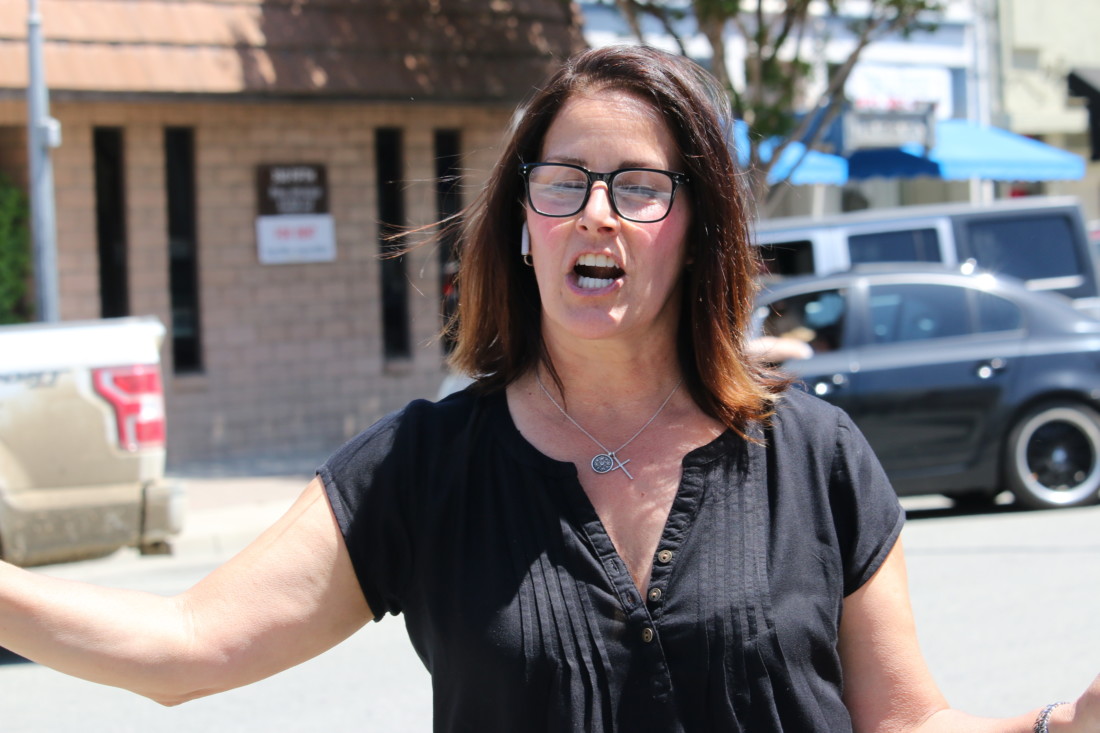 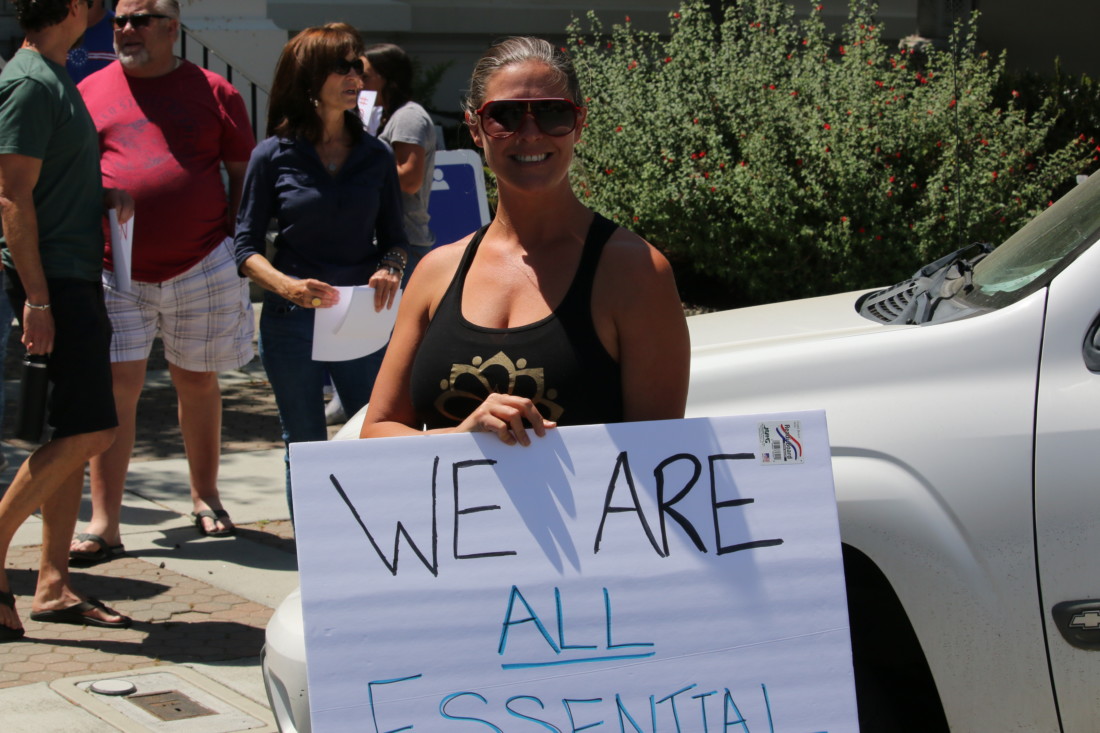 Courtney Evans, owner of Kamal Yoga, said the people don't need their rights given back to them in phases. 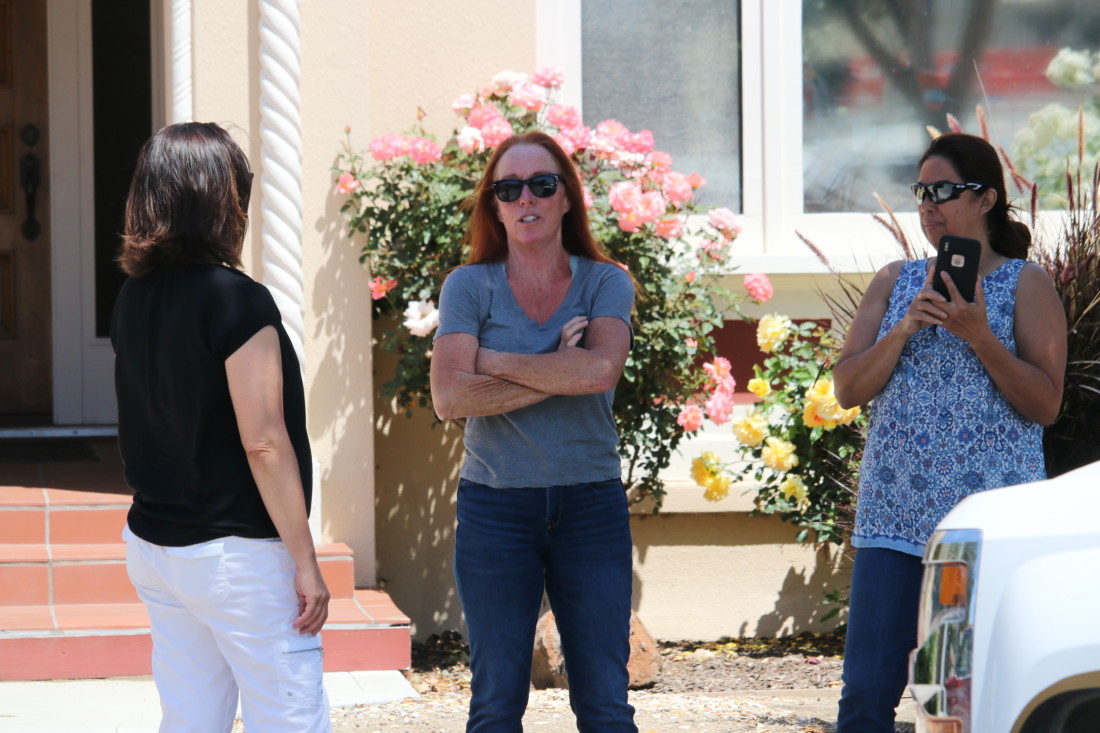 Hollister Councilwoman Honor Spencer kept her distance from rally members as she supported their right to protest. 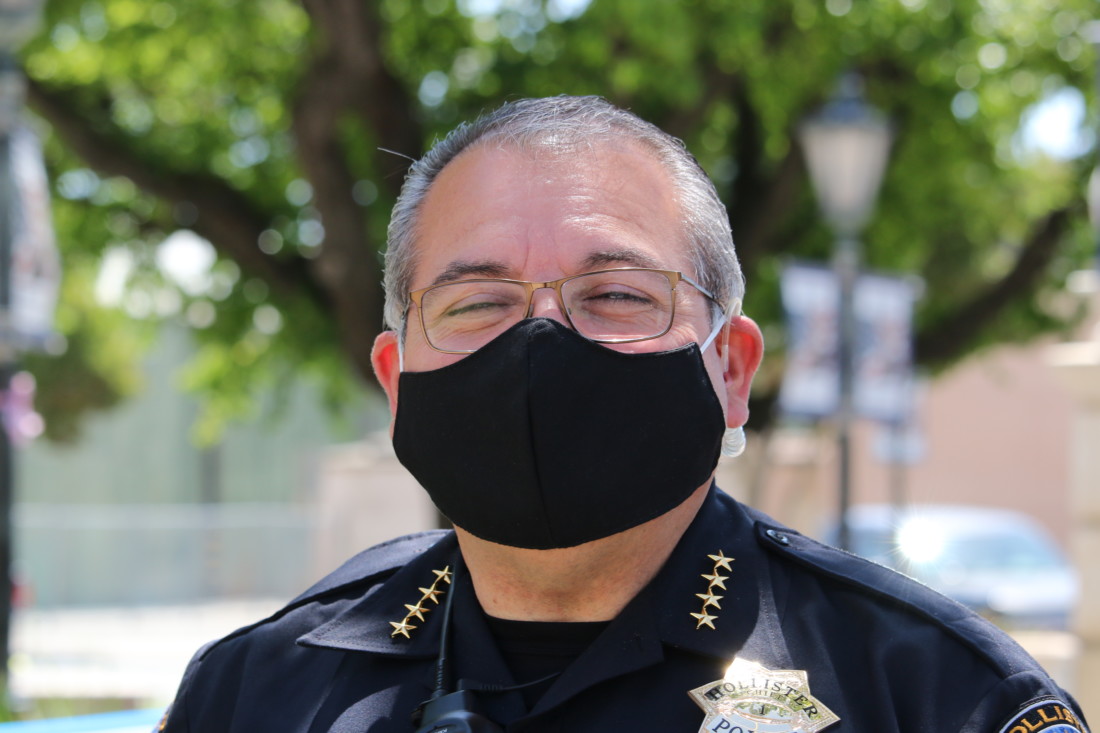 Interim Hollister Police Chief Carlos Reynoso said officers have been and will continue to enforce the shelter order. 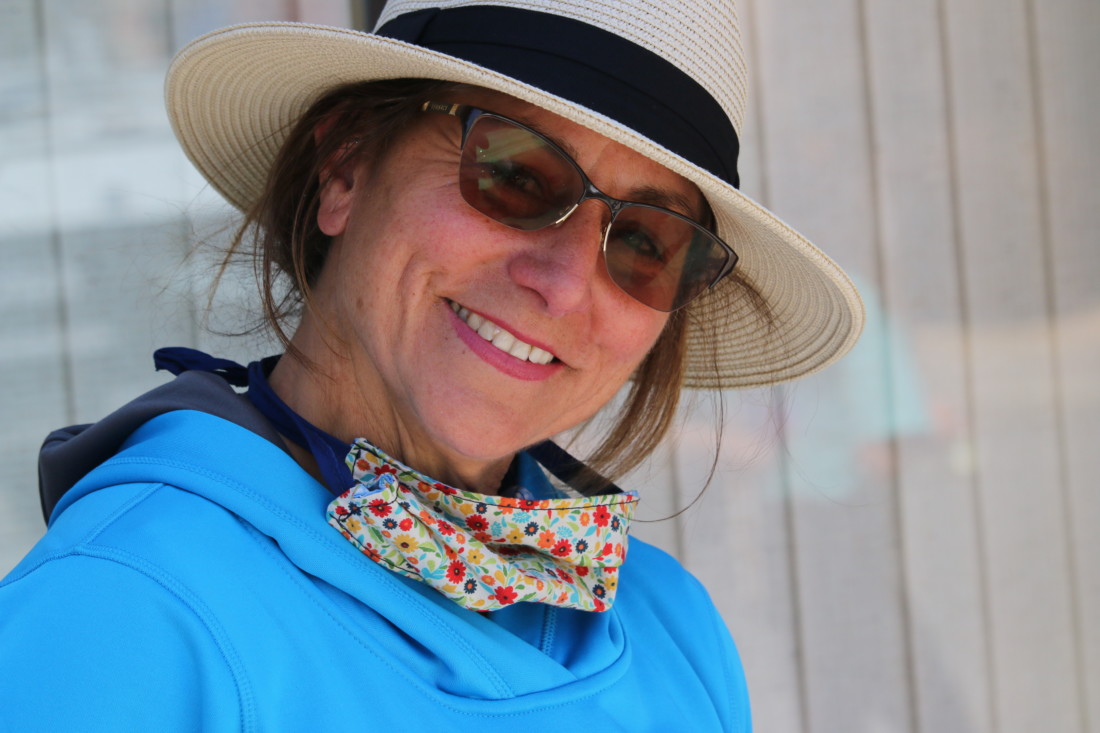 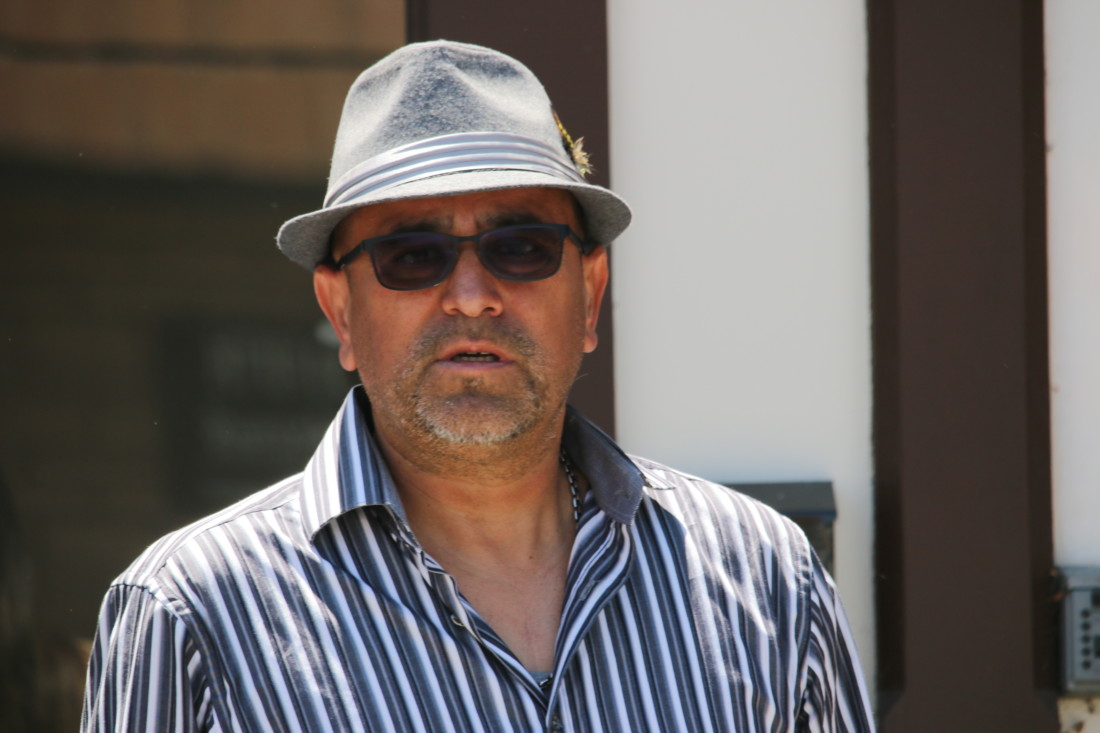 Marty Martinez, owner of Marty's Bait & Tackle, said politicians feel they have a right to suspend other people's rights.
×

About 50 residents and business owners gathered in downtown Hollister on May 1 for a rally to speak out against the shelter-in-place order.

Organized around the #OpenSBCRally hashtag and the #OpenSBC Facebook page, the group waved signs in front of City Hall at 351 Fifth Street as motorists honked and held signs of support out the windows as they drove by. The group then paraded up and down the sidewalk of San Benito Street between Fifth and South streets as traffic backed up and more horns honked in support.

There were no signs of a counterprotest, and the only elected city official spotted was Hollister Councilwoman Honor Spencer, who said she was there to support people’s right to protest. She practiced social distancing and remained across the street from the gathering.

Hunter Cuneo, fitness professional and owner of San Benito Strength, claimed a San Benito County Sheriff’s deputy harassed him a couple weeks ago for assembling a few of his clients in a private location.

“I was threatened with a fine and arrest, which flipped a switch in me,” Cuneo said. “I’m here because I want to stand up for a right that actually precedes our Constitution: the right of a man to go out and work and sustain himself and his family.”

Vedana Freitas, an administrator of the #OpenSBC Facebook page and broker at RE/MAX Synergy in Hollister, said even though her business is considered essential under the shelter-in-place order, she was there to support community members who are hurting.

“A lot of independent contractors and small businesses are having to make some big decisions right now if they’re going to make their lease payments,” Freitas said. “We know from the science these restrictions are no longer needed and people can make their own decisions. If people want to mitigate they can and those that don’t want to, don’t need to. We just need to respect people’s rights and trust they’ll make the right decisions.”

Courtney Evans, owner of Kamal Yoga and another administrator of the #OpenSBC Facebook page, said she asked community leaders when the shelter-in-place order will be over. San Benito County announced April 30 that the order will be allowed to expire May 3 and the county will continue to follow Gov. Gavin Newsom’s statewide shelter order.

Evans said she’s supporting the nonessential businesses in the county.

“Our state should have checks and balances, and since our local representatives are not asking the right questions, we the people are here to ask those questions, and not have our rights given back to us in phases,” she said.

“One of the biggest things we do is the farmers’ market, and now they shut that down,” Churchill said. “As a mom with a disabled son who has no educational plan in place because the schools are shut down, I have to stay home, so I can’t run my business. I can’t be out there making an income and keeping my company afloat.”

Marty Martinez, owner of Hollister Bait & Tackle, said even though his business is open during the shelter order, he doesn’t like that politicians “feel they have the right to suspend our rights.”

“Those rights were paid for in blood, and if more is necessary, so be it,” he said. “That’s the only way they’re going to take my rights from me, put me in jail or kill me. You have to say something, you can’t just lay down.”

Spencer told BenitoLink she understood the participants’ frustration. She said there is talk among council members about a soft opening of businesses and that she had a few ideas of what that might look like, but intended to announce them at the May 4 council meeting. She wouldn’t disclose what those ideas were, but did say when it came time to decide which businesses could open, one possible way to do so would be through some sort of lottery.

Asked if the city would follow suit if county supervisors relax restrictions on construction, Spencer said she hopes it does and would support letting the nine developments within the city begin construction.

“I don’t want people out of jobs. I want them working,” Spencer said. She then addressed Mayor Ignacio Velazquez’s comment in an April 9 BenitoLink article on construction, where he said he wanted all local construction to remain shut down until the shelter-in-place order was lifted, even though his own solar business, AES Solar, was operating in Stockton.

“Why shut everything down here and yet the mayor’s business in Stockton is thriving,” Spencer said. “You can’t have it both ways. You can’t sit here and strangle a whole city and yet you’re still making money because you’re not in the city? I don’t like double standards.”

Interim Hollister Police Chief Carlos Reynoso observed the rally along San Benito Street. He told BenitoLink how his officers have been and will continue to enforce the shelter order.

“The whole time we’ve been educating people, it’s in their best interest to follow state and county guidelines,” Reynoso said. “It looks like the county’s order is going to expire on May 3. We’re going to continue to reach out when there’s instances of people not sheltering in place and continue to educate them. We could cite people, but we’re better off encouraging and educating people.”

He said he didn’t think there would be any need to intervene with the demonstrators, unless they infringe on other people’s rights.

“You want to stay away from people, but if someone comes up to you, that’s a violation of your right to maintain distance,” Reynoso said. “No matter what you believe about the virus and how contagious it is or is not, you should respect other people’s feelings about that. That’s why I wear a mask. I don’t have any symptoms, but I have respect for you and I’m going to put it on as I approach you because I want you to know that I have your feelings in mind and don’t want you to feel uncomfortable talking to me. People can exercise their rights, but they should keep in mind the rights of others.”