Parents and a special education teacher voice dismay with school board and administrators. 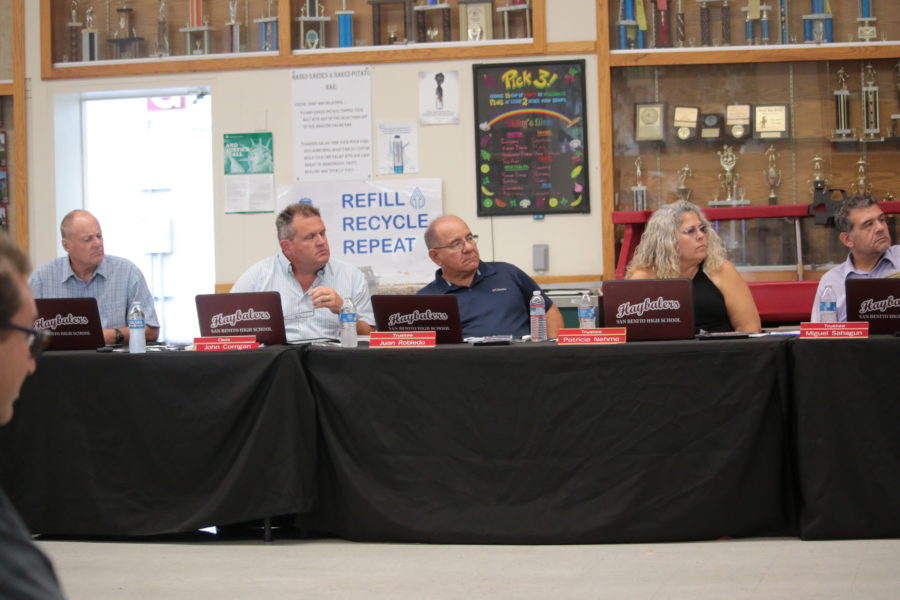 The San Benito High School Board of Trustees at an Aug. 27 meeting, where they heard from parents and a special education teacher about alleged inappropriate behavior in a classroom. Photos by John Chadwell.

Parents of special needs students expressed dismay at the meeting.

Virginia Gardner said she brought her son to the meeting to show people who she's fighting for.

Paulina Kluga claimed her daughter was harrassed and falsely accused of plagiarism during her time in the SBHS general education program.

Susan Villa said she would never understand how Superintendent Shawn Tennenbaum could reach out to the press, but not parents.
×

Demonstrators gathered for the second time at the Aug. 27 San Benito High School Board of Trustees meeting, with several parents directing their dismay squarely at trustees and Superintendent Shawn Tennenbaum. Parents and educators alike have rebuked the school’s leadership in recent months for a lack of transparency and unresponsiveness to alleged behavior after two anonymous letters claimed an aide made inappropriate sexual comments, showed a pornographic video of herself, and other inappropriate photos while students were present in a special education classroom.

On Aug. 27, the focus was on bullying and retaliation by school administrators against a whistleblower and others.

“In January and several other times during the year, I reported concerns directly to the person who is my supervisor, Melissa Casas,” she said. “I was surprised to hear that an anonymous letter opened the investigation in January. I believed it [was because of] my whistleblowing, which I did in person.”

Vasquez told the board she felt that Tennenbaum, “walked up to the legal edge of slander and I do not think that is fair.”

She went on to say she wrote to the board because she felt she had no choice and that her concerns differed from those of the anonymous letter writer, and that her supervisors inadequately dealt with her concerns.

“Because of a climate of retaliation and fraternization I do not feel safe making further reports or feel that anything would happen,” she said. “There is no neutral party for teachers in my position to reach out to. I knew when I wrote to you that I was jeopardizing my job. I did it anyway because my students’ well-being is more important than any job.”

Virginia Gardner brought her special needs son Craig, 20, to the meeting to “remind people who we’re fighting for.” As she approached the podium she invited him into the room, but he only peered through a door window because “he feels safe outside,” she told BenitoLink. She reminded trustees that she was fighting for children, as well as for installing cameras in special education classrooms and holding people responsible.

“I was interviewed over the summer and I was disenchanted when the head of HR [Cindy Krokower] told KION that it was an ongoing investigation, when in fact they had closed their investigation and made their decision,” Gardner said. “Mr. Tennenbaum was interviewed by BenitoLink and what I found disheartening was the biggest smile on his face showed me that he is disconnected to the situation and doesn’t take it as seriously as we do.”

Paulina Kluga said she wanted to share her daughter’s story (though she was not in special education), because of the accusations of improper conduct and conversations in the special education classroom. She said her daughter, a senior in the SBHS graduating class of 2019, was the focus of one teacher’s retaliatory actions and a counselor’s campaign to discredit her.

“This joint effort was not only an abuse of their authority over my daughter, but it was a mental and emotional hardship endured at a time which should have been a milestone in her life,” Kluga said. “After contacting San Benito’s high school principal in search of a resolution with the teacher in question, her retaliatory efforts remained to lower my daughter’s grades.”

Kluga said her daughter endured unethical grade changes, humiliation, discrimination and harassment in the form of unsubstantiated accusations of plagiarism. She said she submitted a complaint to the district office.

“With the current investigation of the staff at the high school I felt I needed to speak out,” she said. “We, as parents, have to trust the administrative staff, teachers, and school bus drivers to act responsibly and ethically.”

Susan Villa said she would never understand how Tennenbaum could reach out to the press and not do the same for parents.

“This is why at every single board meeting I will attend and I will speak for my kid and all the rest of our students,” Villa said, adding that she agreed with Vazquez that Tennenbaum’s statement in the BenitoLink story came close to accusing her of writing the anonymous letters.

“If she had the guts to sign the letter, how dare anyone, including this board, assume she wrote an anonymous letter,” Villa said. “She could have lost her job and she’s probably still a target. It’s wrong that somebody who stood up for our kids is being ridiculed and retaliated against.”

She also addressed Tennenbaum and Krokower’s assessment that whatever occurred in the classroom was an adult-to-adult issue.

“If it’s adult-to-adult in my kid’s class I have a right to know,” Villa said. “It is wrong that you have not once met with us. We did not have to get to this point. However, because you chose to not even acknowledge our issues, the people who lent our children into your care, you couldn’t take two damn seconds to speak with us. Because of your lack of giving a crap about my kid and all the other kids in special ed, I have a lawyer and if you think I’m a dog with a bone you haven’t seen anything yet.”

The trustees did not respond to BenitoLink’s request for comment.

When contacted for comment, Tennenbaum said the district had already responded to BenitoLink’s questions.

“We stand by our investigation and our special education program and have no further comment at this time,” he said.