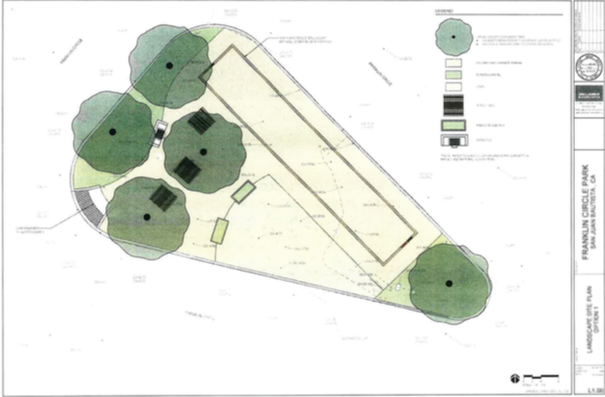 The old designs for the proposed park. Image from meeting agenda packet.
×

A bocce ball court, barbeque pit and three picnic tables are among the features of the Franklin Circle park design approved unanimously by the San Juan Bautista Planning Commission on Dec. 1. Commissioner Luis Matchain was absent.

City Manager Don Reynolds told BenitoLink he doesn’t know the cost of the park development. However, he said the city has incurred $12,000 so far, which typically is about 10% of pre-construction costs. He said the worst case scenario is $132,000 total for the project.

“Having said that, we are aware of some funds that were bequeathed from a neighbor that passed away to the construction, and a lot of talented volunteer work that folks want to contribute,” Reynolds said.

At the meeting, commissioners directed city staff to look into replacing a fire hydrant on the property, as well as exploring lighting and a park sign.

Rochelle Eagen, a lead library technician who’s taken on more responsibilities within the city in response to the COVID-19 pandemic, presented the item to commissioners. She said the hydrant, which might not be operational, was a concern for public works as it might not allow for the planting of one of five trees included in the design.

“It didn’t work back in 2015, I believe, when there was a fire five houses down,” Eagen said. “The residents actually had to use their own water supply.”

She said the hydrant was just a pipe sticking out of the ground, later identified by Commissioner Scott Freels as a wharf head. Freels is scheduled to be sworn in to the San Juan Bautista City Council alongside Councilman John Freeman in the final December meeting after being elected in the Nov. 3 election with 531 votes.

As for naming the park, Eagen said it’s up to the Farney family. According to the meeting agenda packet, the family of Glenny Farney donated money from her estate upon her passing to develop the park. Reynolds said naming the park will be on a future agenda.

Freels said the park project was special to him as he grew up playing there and his uncle maintained it for some years.

“All of a sudden it just all died and became kind of bleak, so I’m super happy to see this park get new life,” Freels said. “This is going to be beautiful.”

He commended Reynolds for his work on the project. According to the agenda packet, Franklin Circle resident Mary Morales pushed three city managers to advance the project over the years.

Reynolds said he first hired a title company to confirm the city had rights to the property and learned the city was co-named along with Herman Botelho, former mayor, supervisor and uncle to Supervisor Anthony Botelho. Reynolds then hired Joni L. Janecki & Associates to update the first design by Franklin Circle resident Jimmie Martin. The new design includes an disabled access ramp, two raised garden beds and a storage space for equipment.

“We wanted to bring it to city standards,” Reynolds said. “We wanted to make sure we had handicap accessibility so that was a big one for me.”