Homeowners claim DeNova Homes misled them about the homeless situation near new homes and they fear those who live by railroad tracks. 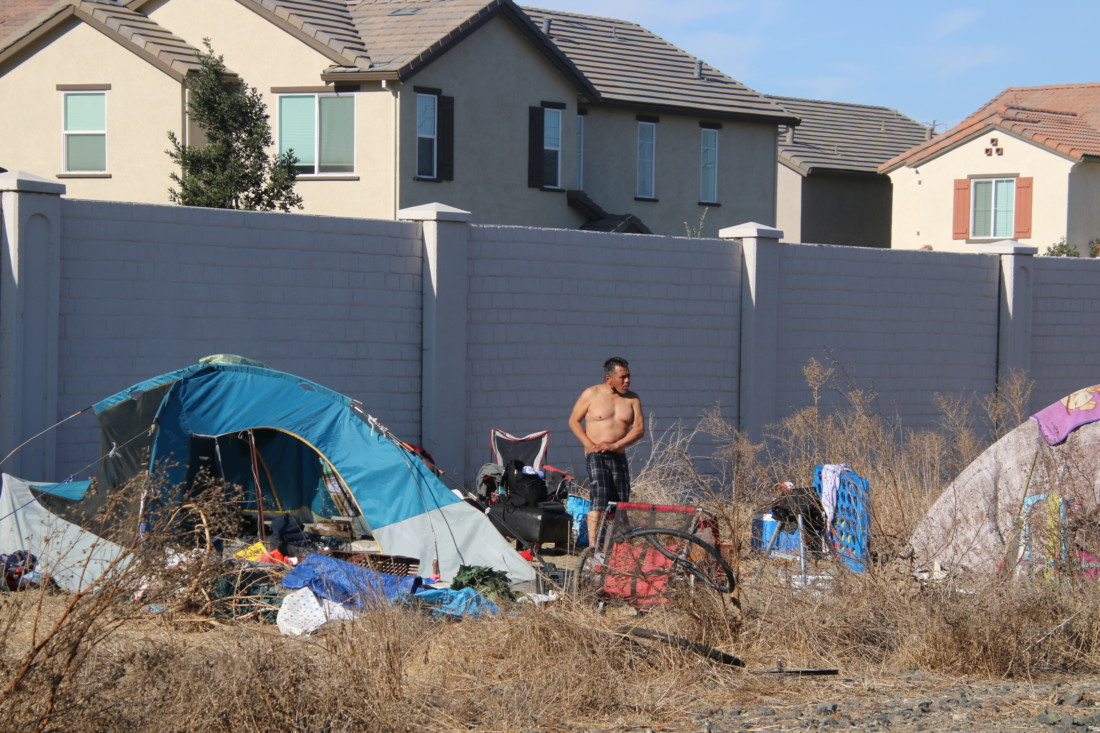 Larry Avira has been homeless for seven years and lives on beyond the wall of a subdivision of new homes. Photo by John Chadwell.
×

A homeless encampment of tattered tents, abandoned cars, bikes, appliances, clothing, and other debris near the Allendale neighborhood in Hollister has new homeowners upset.

When potential buyers came to see the new, 81-acre DeNova Homes development on Vista Park Hill, the homeless and their possessions had been removed at the behest of the developer.

Those who have purchased homes in Allendale’s The Lanes subdivision are experiencing the most impact with homeless persons wandering their streets, causing alarm to homeowners. Their new homes now overlook debris scattered haphazardly for a mile or so stretching from North Street to a PG&E power station. Walker (who wanted to be identified as such for privacy reasons) said her neighbors have had to call the police to remove homeless persons who have come up into the development to sleep or rummage through garbage cans. She has also taken away mattresses from the hillside above her home.

“Not only is this affecting the value of our new homes, but they’re also leaving trash around,” Walker said. “This morning they’re out here going through the trash. There was a woman going through the streets with a knife and we have kids out here playing. And they’re yelling and screaming over there at night.”

Some of the homeowners are angry at the developer, saying they were misled and even lied to about the homeless situation. Others said they were tired of going in circles with Mayor Ignacio Velazquez and city code enforcement.

“In advance of home sales in the Allendale, DeNova worked with the city, the county and a local nonprofit to assist those in the local homeless community by helping them to find shelter,” DeNova Homes Marketing Manager Bridgitte Nowinski told BenitoLink. “Given the global pandemic, the current unemployment rate, and California’s housing shortage, it appears that we have more community members in need.”

The residents BenitoLink spoke to expressed concern for the less fortunate, though some homeowners in The Lanes are upset that they now live in homes worth hundreds of thousands of dollars while people experiencing homelessness have set up what appears to be a permanent camp on the other side of the wall just feet away.

On Jan. 16, 2018, DeNova Homes broke ground for nearly 300 homes and evicted those living along the edges of the hill as they bulldozed the makeshift community. As these older homeless persons escaped with what they could carry, younger homeless men and women kept to their tents and cardboard shelters beside the tracks. Those in makeshift housing would disappear from time to time, but now they’re back.

Allendale residents say the city needs to relocate them, or at least provide some storage or bathroom facilities.

“I was told they don’t want to go to the shelter because they would have to follow the rules,” said Walker. When she moved to Hollister from San Jose in April 2019, she was unaware of the on-again, off-again homeless encampment next door. She now describes it as “an expanding problem being ignored by the mayor, officials and law enforcement officers. I am afraid of them,” she said referring to her neighbors without shelter.

Even if the homeless did want to go to the shelter, Enrique Arreola, deputy director of the San Benito County Health and Human Services Agency, told BenitoLink it isn’t an option. He said nine residents of the shelter tested positive for COVID-19 and were placed in trailers the county maintains for temporary shelters; 20 others were being quarantined in the shelter, at the earliest. He also said no new homeless persons can be admitted, but there is still funding available to place some in hotel rooms.

Glenn Ortiz, a single mother who works in the planning and development department for Santa Clara County, moved from San Jose to the Allendale neighborhood in May 2019. She talked to Mayor Velazquez about the homeless encampment, asking him if it can’t be moved, then why aren’t the inhabitants being provided sanitation or shower accommodations, or personal protective equipment?

“He told me to contact the city manager and blew me off and said there’s not much he can do,” Ortiz said.

Velazquez confirmed that he did speak with Walker and others and advised them to talk to code enforcement.

City Manager Brett Miller told BenitoLink, “The city continues to work with the county on the homeless issue. For the current fiscal year, the city contributed $250,000 to assist in the operation of the homeless shelter.”

Maria Villanueva moved to Hollister from San Jose in April. What she knew of Hollister before the move came from her sister, a resident of 25 years, who described it as a quiet town. After living here for eight months, she said her main concern about the people camped out on the opposite side of the 10-foot sound wall near her second-story window is that the weather is getting colder.

“They’re starting campfires and I’ve already called two or three times and waited for the fire department to come out,” Villanueva said.

Some of the homeless persons come into the community on garbage pick-up day, which she said “they don’t have permission to do.” She said she’s seen them “lurking around the neighborhood,” but is not aware of them stealing anything or attempting to break into homes.

“They don’t bother me, but I think it’s important to relocate them,” she said, adding that when she bought her home, the DeNova Homes salesperson told her the company was “taking care of the homeless situation and they would not be there.”

Walker and a woman called Belen (who would not give her full name) told BenitoLink they heard word-of-mouth that those living on the other side of the wall were possibly dangerous, on drugs and refused to go to the homeless shelter. Both said they are afraid when they see a homeless person in their neighborhood.

On the other side of the wall, 57-year-old Larry Avira grew up in San Jose and graduated from San Jose High School in 1981. He worked over 20 years before his world fell apart, he said. He has been homeless for seven years.

“I don’t know why they’re afraid of me,” Avira said, adding that he is afraid all the time because he has been “kicked out of the shelter” for having vodka that he claimed wasn’t his, and must search for somewhere to sleep each night.

When BenitoLink met Avira on Dec. 5, he had no possessions and was dressed only in shorts and caved-in shoes. He rambled and seemed dazed. He cried after asking if he could tell his story of how being bipolar and an alcoholic caused him to lose his job, his wife and three children. He said he ended up in the Correctional Training Facility in Soledad for six years.

Avira said he has been attacked three times in recent years, but feels safer in Hollister.

“I just wish we could talk and get to know each other,” he said of the homeowners on the other side of the wall.

Walker told BenitoLink when she was also concerned about potential fires and tried to find answers about weed control and tree trimming. She was referred to numerous people in the city and county governments and no one offered to help. She said she spoke to Velazquez before the recent election about her worry about fires because of weeds along the tracks and overhead trees near powerlines. She called city code enforcement about the weeds.

“The Union Railroad Company sent out a team last week, but they determined that the overgrowth was too large for their crew to take care of,” Nicholas Gaudin, a city code enforcement officer, told Walker by email on Aug. 26. “They are working on sending out another company to remove the overgrowth.”

Five weeks later, she said nothing had changed. On a recent call, she said code enforcement told her, “After the mayor met with the supervisors, they decided to turn this over to the Sheriff’s Office.”

BenitoLink called code enforcement and was told Gaudin was no longer there and they would check into the issue. There has been no further response.

Capt. Eric Taylor of the San Benito County Sheriff’s Office told BenitoLink the homeless encampment along the tracks is a tough situation for the department to tackle.

“I understand the frustration the residents must feel,” he said, adding that because of changes in case law as it relates to homelessness, it is difficult for law enforcement to do “evictions and/or criminalize homelessness,” especially during the pandemic.

Walker said nothing has been done since she spoke with Velazquez.

“He said he had written to the railroad about cleaning up the weeds, and ‘if they didn’t come, they had the authority to clean it up and bill the railroad,’” she said. “When I checked back and talked to my neighbors, he was saying there’s basically nothing we can do.”