A personal perspective on life in San Benito County within the context of repeated wars over time from the 1950s to the present. 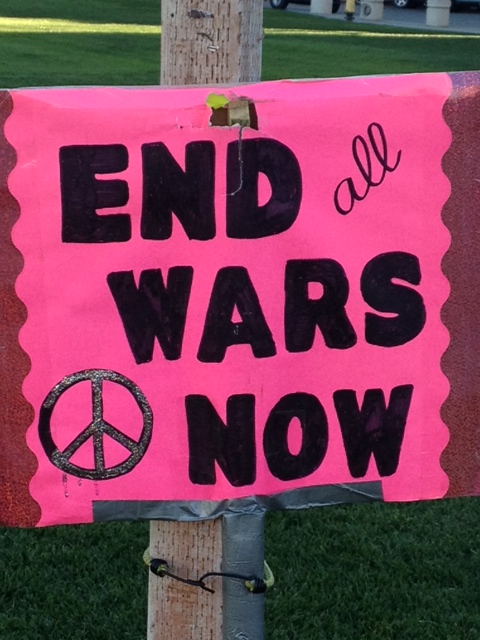 During the recent dedication at the Pinnacles National Park, where graceful winged giants swoop to dispose of the dead and volcanic spires once alive with fire reside in awesome silence, I overheard a woman comment on her experience of Hollister. She complained of joining a small population of only 20,000 then. She opined, “This was so small that there was simply nothing to do.” These words overheard shifted my memories back to my arrival to a population of 4,000. Why did I have plenty to do?

Painting and clean-up in an abandoned ranch house, tallying pear buckets harvested y workers in the orchard, and calculating weekly payroll (nothing withheld then, wages were 25 cents/hour). Meanwhile in a non-peaceful part of the world, the Korean War–raging viciously–treated farming kindly as the country needed food supplies. Peaceful San Benito County produced abundantly.

Downtown shopping was a gem of sociability. One could park easily on the street or around the corner, then walk and make eye social contact with all. The block between Fifth and Sixth Streets was home to Baughman’s (women’s clothing), Shippers (men’s clothing), Ladd Hardware, The Wardrobe (men’s clothing and shoes for dress and work). One could drop into Pennywise, Hollister Pharmacy or Wapples for a prescription or simply for toothpaste, shampoo, cosmetics and shaving supplies. (Grocery stores marketed only groceries.) If one wanted a soda with or without ice cream, Whalens Drug Store kitty-corner from the Bank of America was the choice. Being the only soda fountain/lunch counter in town made Whalen’s the hub of downtown where cowboys liked to tip their broad brimmed hats as they purchased Jack Daniels, Seagram’s Seven, or Old Crow and picked up the latest news. Whalen’s now has become offices for American Electric & Solar. Visitors to the Pinnacles National Park might help restore downtown to its past liveliness.

On the one hand, in the warm spring sunshine, as we enjoyed the beauty and aroma of cherry blossoms, hard working honeybees must have imagined they were in honeybee heaven. On the other hand loomed the Cold War of fear. Remembering the devastation to Hiroshima and Nagasaki brought great anxiety. Some say that the nuclear stand-off between the U.S. and the Soviets brought peace. In reality, our own weapons terrorized us.

Shifting back when manual gears were not an option, the California Department of Transportation widened Highway 156, splitting our ranch with housing on the west side cut from the east side of shops, sheds, warehouse, and offices. To reconnect the areas, Caltrans constructed a walking underpass. That was to be our “bomb shelter” to save us all as the Cuban Missile Crisis escalated.

Yet why did war clouds seem to hang unbroken above the melodies of the birds and hum of the bees? Like the Pinnacles, San Benito County gifts to us the proper connection to cycles of life, nature and growth when these roots become so lacking during constant warfare.