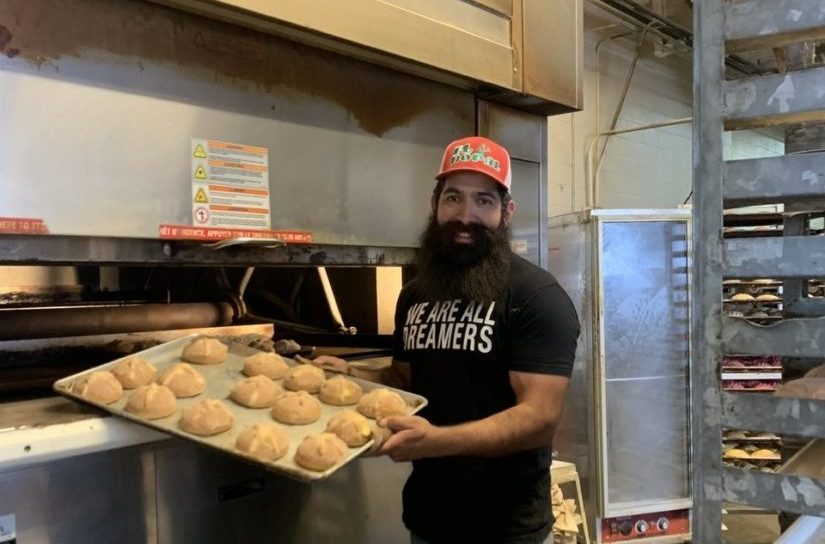 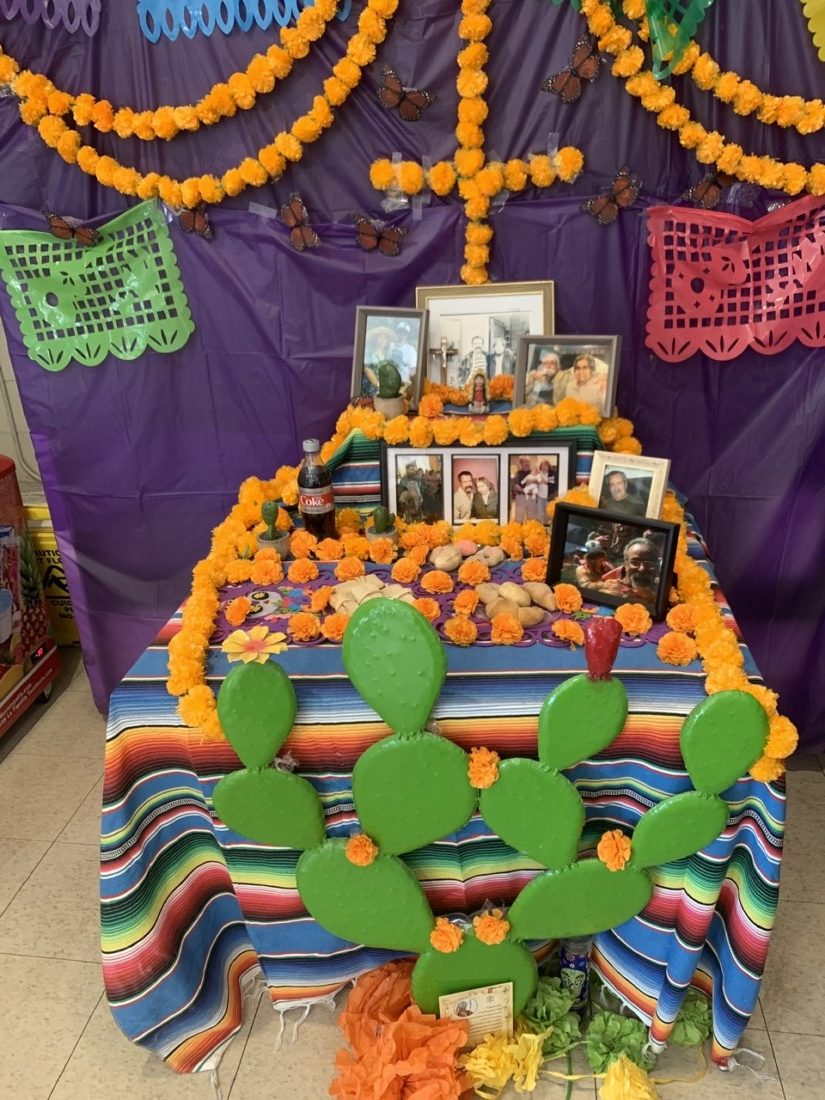 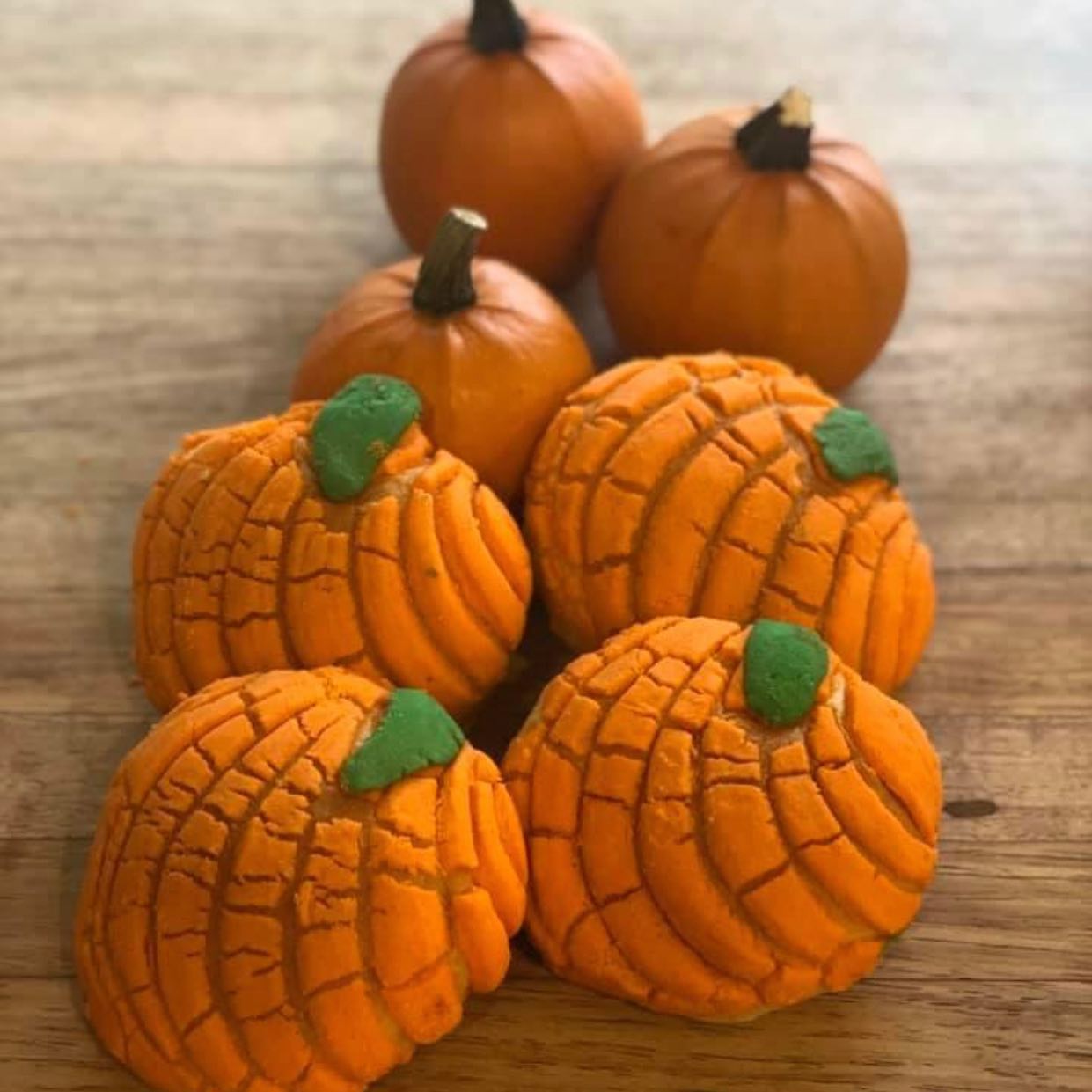 Berlanga created the pumpkin concha this year. It will be available through the fall season. Photo courtesy of El Nopal Bakery.
×

As Dia de los Muertos draws near, pan de muerto (bread of the dead) is in high demand at El Nopal Bakery in Hollister. Owner Frankie Berlanga anticipates making 600 pieces of pan de muerto per day in preparation for Dia de los Muertos, a Mexican holiday celebrated in conjunction with the Catholic observation of All Saints Day on Nov. 1 and All Souls Day on Nov. 2. The bakery will produce about 5,000 pieces of the specialized bread.

“Our Pan de Muerto recipe has been handed down for five generations, beginning with my great, great, great grandfather who immigrated from Spain to Nuevo León, Mexico,” said Berlanga, a lifelong Hollister resident. “Our business honors our heritage and by feeding our community our bakery is an integral part of the fabric of so many homes, celebrations, and special moments. Our patrons are vital to our livelihood, and we are thankful for them.”

Pan de muerto is a sweetened soft bread shaped like a bun, often decorated with skulls or crossbones. It’s a tradition to eat the bread and also leave it on ofrendas (altars) for the deceased. It’s believed the dead come by to absorb its essence alongside water, their favorite drink, or other foods left to replenish themselves after their long journey back to the material plane to revisit loved ones.

Some people observe the holiday by creating an ofrenda in their home, where they honor loved ones who have passed, display pictures of the departed alongside favorite drinks and foods they enjoyed while alive. This long held tradition is depicted in the movie “Coco.”

El Nopal has an altar, all year long, dedicated to its patriarch and founder Adolfo Berlanga. He founded the bakery in 1975 and died in 2018. Reminiscing about years past when he baked alongside his father, Frankie Berlanga said, “During this time of pan de muerto, my father and I would always pay homage to our relatives who had passed while we shaped the bread for our community. We would share stories, cry, and laugh remembering our loved ones. Hoping that our customers would do the same while they enjoyed this special pan.”

Berlanga said he arrives at 1 a.m. to start the process of making the pan de muerto. He works alone until he is joined by three bakers around 3 a.m. Berlanga said he honors his father’s memory, “by following in his footsteps, and doing everything the way he taught me and his father taught him and so on for five generations.”

This year brings a new addition to El Nopal’s offerings: pumpkin conchas—traditional Mexican pan dulce (sweet bread) inlaid with sugar designed to resemble a pumpkin in bright orange with a bright green stem. Berlanga said it instantly became a hit and has sold out each day before the next batch can be made.

“I created this because I thought it would be a fun way to celebrate the fall season,” he said. “I created it on a whim, hoping the community would enjoy it and they have. We will definitely have pumpkin conchas through Thanksgiving and next fall too!”

Berlanga said he’s looking to hire more bakers who are willing to start at 3 a.m. and want to learn the art of traditional Mexican bread making.

Asked how he will honor his father on Dia de los Muertos, Berlanga said, “by continuing to follow in his footsteps, honor the legacy of our recipes, work hard, and be grateful for our beautiful community who has supported our business for the past 45 years. Without our community we would not exist.”

Local celebrations for Dia de los Muertos will take place on Nov. 2 at Sacred Heart/St. Benedicts. The church will hold a Mass in English and commemorations of the faithful departed at 9 a.m.; a bilingual Mass at 12:30 p.m.; a Mass in English at 5:30 p.m.; and a Mass in Spanish at 7 p.m. The cemetery and columbarium will be open from 9 a.m. to 4 p.m. COVID-19 restrictions will be in place for visitors. These include wearing a face mask, social distancing, no picnics, food or drink, no tables, canopies or tents, no altars, and no live music.