Trial could begin in September or October. 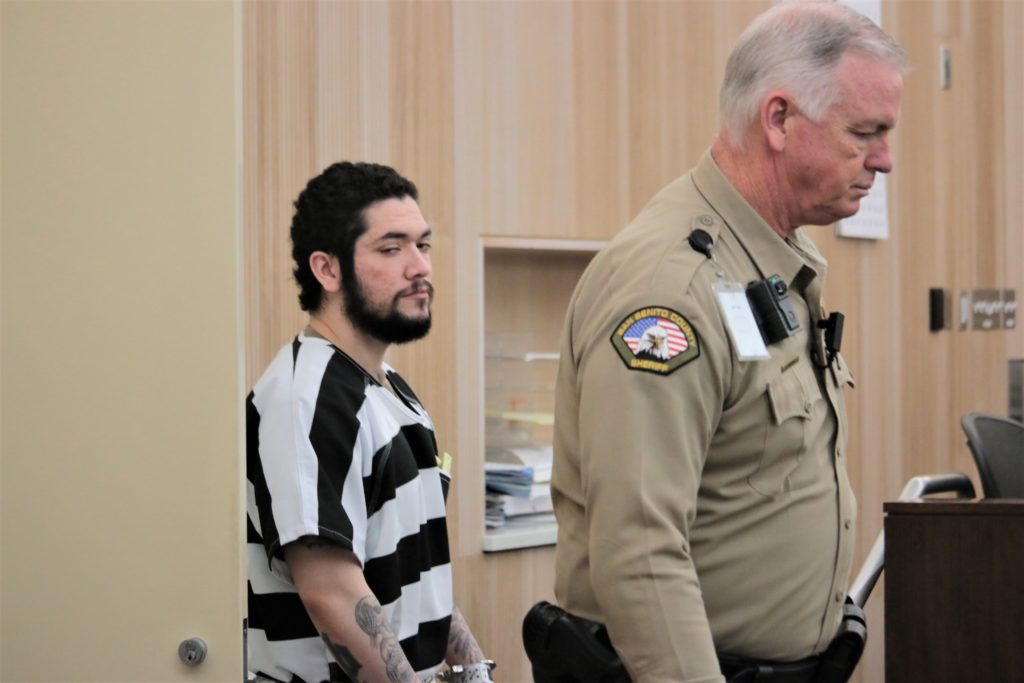 Jose Antonio Barajas enters San Benito County Superior Court for a hearing on June 13 to determine a trial date, which was delayed because his attorney Gregory LaForge was ill. Photo by John Chadwell.

Barajas confers with defense attorney Arthur Cantu, who was standing in for LaForge. Photo by John Chadwell.
×

Jose Antonio Barajas will return to San Benito County Superior Court for a hearing on June 27 at 9 a.m. He faces a charge of first-degree murder, three counts of attempted murder, two counts of kidnapping and false imprisonment.

Barajas appeared for a pre-trial hearing before Judge Steven Sanders on June 13 to set a trial date. The decision was delayed because Barajas’ court-appointed attorney, Gregory LaForge, was out sick. Sanders asked defense counsel Arthur Cantu (standing in for LaForge) and the prosecution to check their calendars for possible dates in September or October to begin trial proceedings.

On April 15, deputies with the San Benito County Sheriff’s Office gave hearsay testimony from three eyewitnesses who claimed Barajas fired shots at a vehicle on Aug. 1, 2014 during a pursuit through the streets of Hollister. One shot struck 19-year-old Ariana Zendejas, who was riding in the back seat of the vehicle being pursued. She was driven to Hazel Hawkins Memorial Hospital, but died later while being transported by helicopter to another hospital.

According to the testimony, Barajas was aided by an unknown individual to hide somewhere near Hollister before he escaped to Mexico, taking Vanessa Flores-Ibarra with him. He was captured in Guadalajara on July 12, 2018, extradited and flown to San Jose to be transported to San Benito County. He has been held there since then without bail.

According to the April 15 testimony, Flores-Ibarra told deputies that Barajas kidnapped her and after a time began beating her. She was pregnant and said she feared for her unborn baby’s health. She was able to escape and make her way back to the U.S. before Barajas was captured.