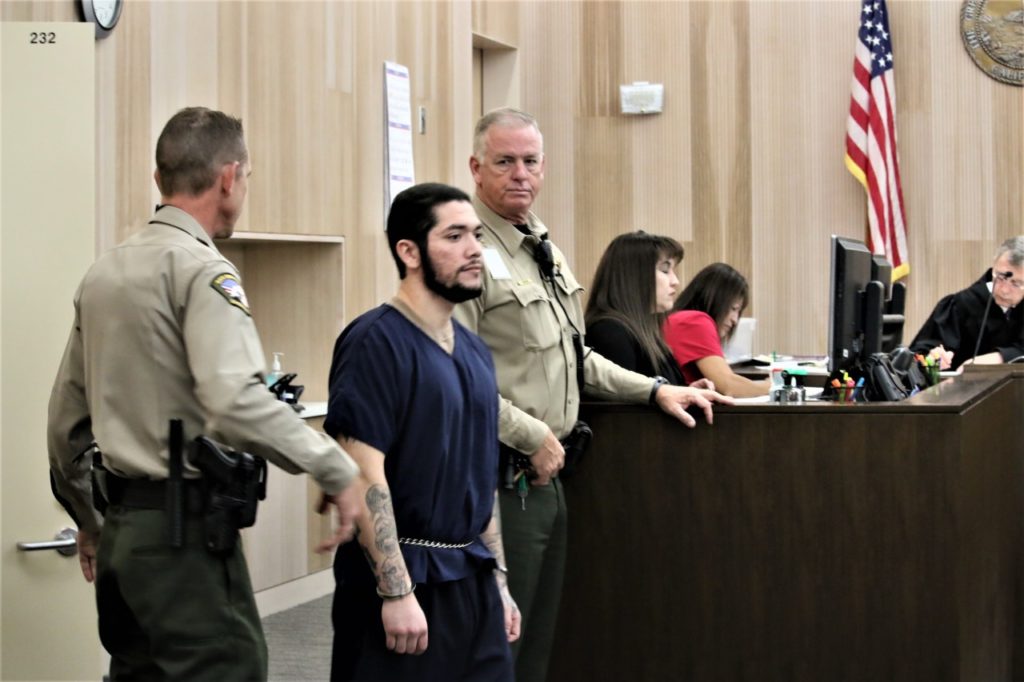 Court bailiffs lead Jose Antonio Barajas into court where he may soon be on trial for murder and other felonies. Photos by John Chadwell. Jose Antonio Barajas, 24, appeared again before San Benito County Superior Court Judge Steven Sanders on Oct. 18 in connection with the 2014 murder of Ariana Zendejas, who was 18 at the time.

Barajas has appeared in court five times over the last three months. After the most recent hearing on Sept. 27, it looks like he was approaching a preliminary hearing after Sanders directed the prosecution and defense counsels to come back to court next week.

Following a whispered conference at the bench between Sanders, defense attorney Gregory LaForge and Assistant District Attorney Karen Forcum, they discussed the possibility of a preliminary hearing to be held either Dec. 17 or Jan. 14, 2019. The final decision will be made Oct. 25.

“I’d like to come back in a week with those two dates for a possible preliminary hearing and have both the prosecution and defense let me know if there are any witness problems with either of those dates, and then we can definitively set the date,” Sanders said. “And that gives Mr. LaForge a chance to go over some of the documents.”

LaForge explained later that at the preliminary hearing the prosecution would most likely present law enforcement witnesses. There is a chance, he added, that the prosecution might also call on citizen witnesses who either saw what happened or perhaps named in the district attorney’s complaint as victims of the crime that took place near West and B streets in Hollister, on the morning of Aug. 1, 2014.

“The DA will call witnesses to testify beyond a preponderance of the evidence that there was a crime and my client committed it,” LaForge told BenitoLink. “If that’s not proven, then he doesn’t get bound over for trial. I assume it’s going to be a 115, or hearsay, which is admissible through law enforcement. I can’t anticipate she [DA Candice Hooper] will call any [citizen] witnesses, but I can’t speak for the DA.”

If a trial is set, there may be, at minimum, six potential eyewitnesses against Barajas. In addition to Vanessa Flores-Ibarra, who has been described as Barajas’ girlfriend at the time of the killing, another woman was also named as a possible kidnap victim.

Barajas is charged with seven felonies, including the murder of Zendejas, discharge of a firearm, kidnapping, assault with a firearm with special enhancements, firing a weapon in a vehicle, and several misdemeanor traffic violations. He is also accused of committing an assault with a deadly weapon against four males. In addition, authorities have been reluctant to say whether Flores-Ibarra is a victim or an accomplice.

At his last court appearance, Barajas pleaded guilty to the traffic misdemeanors. Sanders accepted the pleas, levied fines for each and converted them to jail time served, thus clearing the books of the traffic violations.

Barajas continues to be held in the San Benito County Jail without bail.