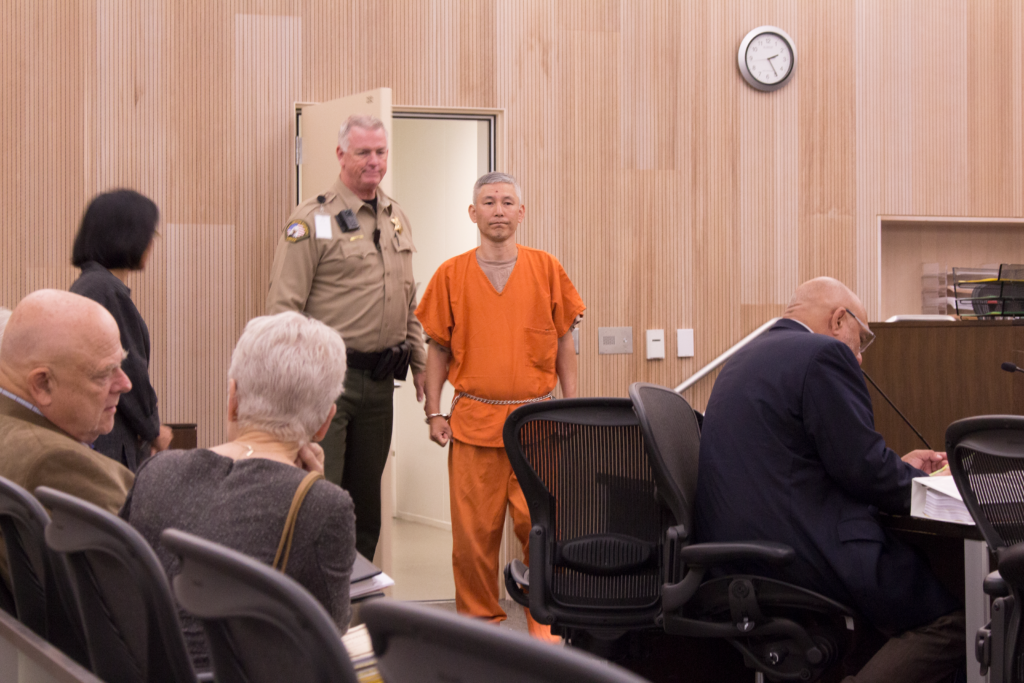 Sang Ji walks into the courtroom at the July 31 hearing. Photo by Noe Magaña.

The July 31 motion hearings for Sang Ji and Jung Choi, accused of killing Ji’s wife Yoon “Clara” Ji in December 2017, were continued once again as the defense looks to separate the cases and challenge a search warrant served that same month. The next hearing is set for Sept. 11 at 1:30 p.m. and according to District Attorney Candice Hooper, the trial date will be set in October.

Ji’s new defense attorney Arthur Cantu told Judge Steven Sanders at the July 31 hearing that he intends to file a motion to challenge a search warrant for Ji’s home issued Dec. 6, 2017. Cantu replaced attorney Greg LaForge who resigned after Ji turned down a plea deal that would have reduced the charges to voluntary manslaughter.

Sanders gave Cantu until Aug. 12 to file the motions, and District Attorney Candice Hooper until Aug. 30 to respond to the motions. Hooper has the same deadline to respond to a motion filed July 30 by defense attorney Harry Damkar, who represents Choi, to separate her case from Ji. Damkar previously attempted to have all charges against Choi dismissed, but Sanders denied the motion.

The hearings have been continued throughout the process in response to defense attorneys’ motions that included a request to evaluate Ji’s mental health. The evaluation found him competent to stand trial.

Ji and Choi were arrested in December 2017 after Yoon Ji was reported missing by one of her daughters. Sang Ji eventually led investigators to where his wife’s body was buried that month.

Both Ji and Choi have their bail set at $2 million.

During a civil trial, San Benito County Sheriff Capt. Eric Taylor testified that Ji claimed Choi beat Yoon Ji with a bat. In the civil case, both of Ji’s daughters were awarded $20 million.