Once the state attorney general found that the referendum did not qualify to be on the November ballot, the way was cleared for the city to repeal it and move forward with the 400 block project. 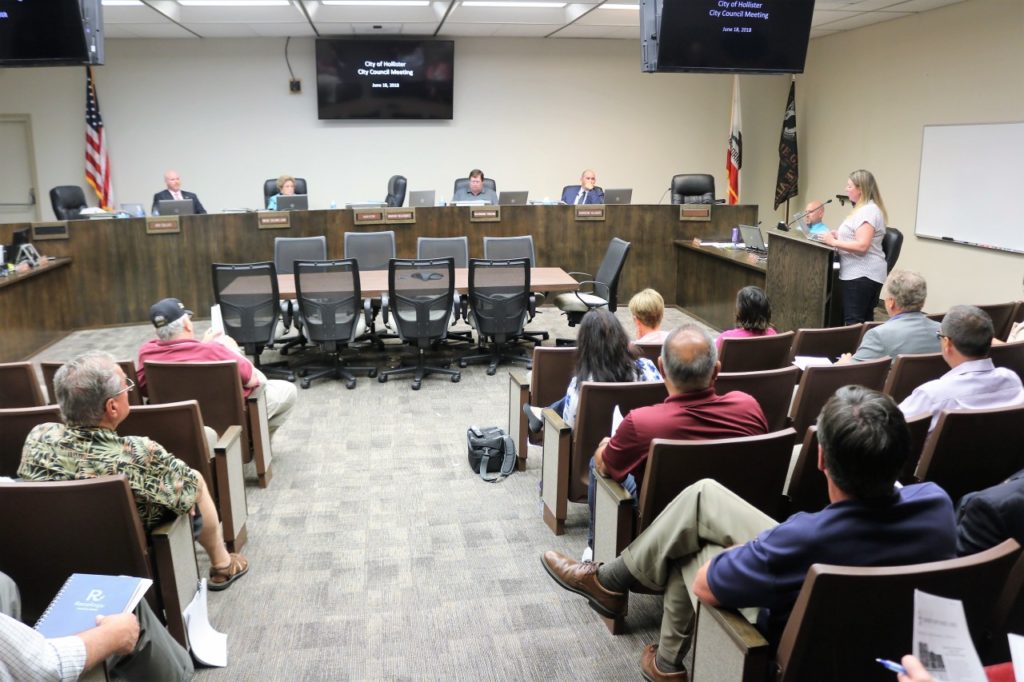 The Hollister City Council passed a resolution June 18 to repeal a referendum scheduled to appear on the November 6 Statewide General Election ballot. It would have allowed Hollister voters to stop a proposed development on the grassy area downtown at the corner of Fourth Street and San Benito Street commonly referred to as the 400 Block.

The referendum was a result of Mayor Ignacio Velazquez’s campaign to whip up community support by gathering 1,600 signatures on a petition to place the referendum on the ballot, as well as through personal attacks on social media against his fellow city council members. The mayor owns the neighboring Vault business and has recused himself from previous council items regarding the 400 block.

In turn, the city submitted an appeal to California Attorney General Xavier Becerra for a determination if the issue was subject to referendum. At the end of April, Becerra wrote the opinion that the resolution was not subject to a referendum.

After recusing himself at Monday night’s regular meeting, Velazquez handed the gavel over to Vice Mayor Mickie Luna. As she asked for comments, Councilman Ray Friend was quick to say, “After 30 years, I think it’s time to put shovels in the dirt.”

Friend’s comment set the tone for the following public comments in that the only dissenting voice—the mayor’s—had left the room and none in the audience spoke against the resolution.

However, Velazquez told BenitoLink June 19 that he most likely will sue the city to stop the project. As he has claimed before, he maintained that the issue is a “lack of vision in favor of friends.” He said in 2014 the 400 Block was up for a council vote to become a public plaza. Then things changed at the last minute.

“Somebody came in and talked somebody into a sweetheart deal,” Velazquez said, adding a study had shown the public wanted a plaza. “It got pulled at the last second to add a few things, and when it came back it had this whole concept of condos, retail, and this palace for the nonprofit groups.”

Velazquez maintains, though he couldn’t name names, cronyism was at play over what was best for the community.

“It’s disgusting,” Velazquez said. “We have the potential to create a vibrant downtown and we’re going to throw it away in favor of some condos.”

In responding to Velazquez’s statement, City Manager Bill Avera said he doesn’t know who the mayor is referring to when it comes to sweetheart deals.

“It’s just sad,” Avera said, “because that’s not how the City of Hollister operates. There’s no advantage to the city to give a sweetheart deal. Because we have a project that has some public benefit it’s a shame this is the position he’s taken.”

During the June 18 meeting, business leaders spoke in glowing terms for the proposed Del Curto Brothers and Community Foundation for San Benito County project. Bob Tiffany, owner of Tiffany Ford and president of the San Benito County Business Council, said the project would not only support nonprofits, it would also provide downtown living and businesses.

Phil Fortino, chair of the Community Foundation board of directors, said the project will provide the most desirable mixed-use buildings that are “coveted by most cities across the state.”

Speaking for the Hollister Downtown Association, Gordon Machado, who told BenitoLink of his candidacy for Hollister mayor, said the business community has actively pursued bringing back businesses to the location that has been a vacant lot ever since the 1989 Loma Prieta earthquake. He said building condominiums downtown would benefit younger home buyers who cannot afford a single-family home.

Kristina Chavez-Wyatt, executive director with the business council, said the philanthropic center would serve as a keystone for revitalization of downtown by bringing people to the area throughout the week.

“The major thrust of the Hollister General Plan is for infill, mixed-use new urbanization-style developments and a preference for multi-family housing,” Chavez-Wyatt said. “Apartments at all levels are at high demand in our community.”

Resident Marty Richman used a different tack to explain his support for the project.

“It is not about the 400 block,” Richman said of the attorney general’s decision. “It’s more important, which is the principle of representative democracy. We elected you to act on our behalf. If every administrative decision you make could be challenged with a referendum, we would never be able to do anything because to get it on the ballot only needs a minority of the people, not the majority.”

Councilman Jim Gillio took the opportunity to run down the entire history of the 400 Block, and concluded that people who are not happy with how the issue was resolved should reserve their anger for elected officials and not the developer or the family that contributed nearly $1 million to build the philanthropic center. Vice Mayor Luna made it a point that out of a population of nearly 36,000, only 1,600 signatures were required to move the referendum forward. By stopping the referendum, she said the city saved $25,000 to $30,000 it would have had to spend to place it on the ballot.

“We were going to spend up to $30,000 because 1,600 people signed the referendum,” Luna said. “I hope people understand what a referendum really is.”

Avera said now that the referendum has been repealed the city can move forward with the development as originally intended. He said the Del Curto Brothers and the Community Foundation will be put on notice that the project is back in play. Over the next few months, they will submit site and architectural drawings to the Hollister Planning Commission, and additional steps that could take a year or more.

“What has been missing in the discussion is the development agreement was the very first step in a long process,” Avera said. “Now that we’re moving forward with the development there isn’t necessarily an entitlement, which they don’t have yet. But getting past this hurdle was a great thing for us because we can move forward.”

When asked for their input for this story, the Del Curto Brothers and the Community Foundation did not respond. Phil Fortino responded by email that the donors, Randy and Rebecca Wolf, were at the meeting and pleased with the decision.

“I’m sure they are going to move forward now,” Fortino wrote. “When all the Facebook posts were full of misinformation and demonizing donors that want nothing more than a sustainable philanthropic center to assist nonprofits, there were hurt feelings for sure.”

Previous BenitoLink stories about the 400 Block: