Hollister residents and city officials have waited since September 2017 to hear back from the state attorney general on whether a referendum could be added to the November ballot. Word came back that it cannot. 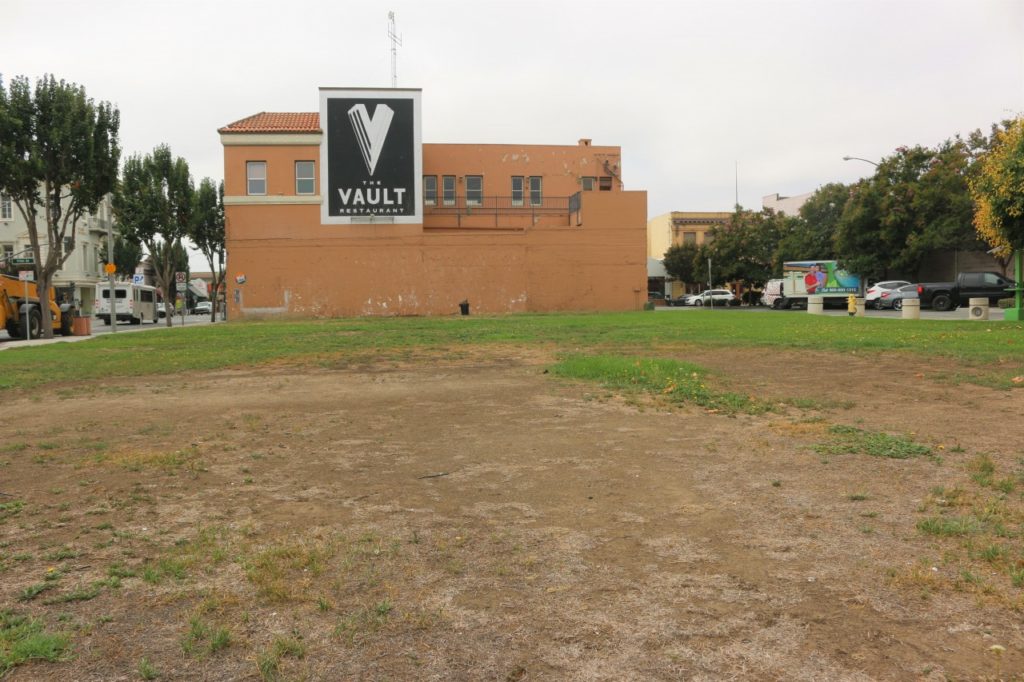 The 400 block at the corner of Fourth Street and San Benito Street. The Vault building, owned by Mayor Ignacio Velazquez, sits in the background. Photo by John Chadwell.
×

Editor’s Note: California Attorney General Xavier Becerra issued an opinion on the matter, not a decision as stated in the headline of the article.

The long-awaited opinion from the California Office of the Attorney General in response to the dispute between Mayor Ignacio Velazquez and the Hollister City Council over the sale of the 400 Block arrived April 27. Attorney General Xavier Becerra concluded that the resolution, which passed in a 4-0 council vote (the mayor recused himself) to approve selling the property for development, is not subject to a referendum.

This means the mayor’s attempt to stop development at the corner of Fourth Street and San Benito Street with a petition signed by 2,465 residents cannot be placed on the November General Election ballot. Placing the decision on the ballot would have left the fate of the 400 block in the hands of local voters.

“I am very disappointed that the city council would go to this length to go against what the people wanted,” Velazquez said Tuesday. “I’m going to talk to my attorneys now.”

Mayor Velazquez has been at odds with the City of Hollister over the fate of the 400 block for several years. While the city has been under pressure to sell the property, the mayor has advocated that the downtown plot remain open space. As owner of the Vault building next to the open lot, Velazquez has recused himself from all council votes related to the 400 block.

The attorney general’s conclusion stated that the state office received word that the City of Hollister passed Resolution 2017-139 on June 5, 2017, which authorized City Manager Bill Avera to enter into a disposition and development agreement for the sale and development of the grassy plot of land known as the 400 block. The parties in the agreement include the City of Hollister, local developers the Del Curto Brothers Group, and the Community Foundation for San Benito County.

The city owns the grassy, downtown plot through the dissolution of the former Hollister Redevelopment Agency, which purchased the property following the 1989 Loma Prieta earthquake and the damage it brought to structures on the 400 block. City officials have previously stated the sale of the property is required by the Department of Finance.

Avera told BenitoLink May 1 that the council would most likely need to go into a closed session to receive legal advice on how to have the council rescind the resolution to place the referendum on the November ballot.

“We would then move forward with the project,” Avera said. “It still has a long way to go, but getting past this hurdle was important.”

Councilman Ray Friend commented Tuesday that the action taken by the city council was not subject to a referendum.

“We were just following the agreement we had with the state that was signed by the mayor,” Friend said. “I showed the newspaper [Free Lance] that after he went to it crying, but they never publicized that he signed the agreement with the state on how to dispose of that property. The whole thing was a power play by the mayor. It was an ego trip and he had the city spend all this money on the referendum. In my opinion it’s just a misuse of city funds.”

Proponents to have the referendum placed on the ballot claimed the city acted improperly by not announcing it was acting as the successor agency, a separate public entity, when it passed the resolution.

“An alleged impropriety, however, is not challengeable by referendum,” the attorney general’s finding stated. “Simply put, unlawful action is addressed in the courts, not in the voting booth. Because an alleged impropriety in passing the resolution does not speak to the availability of referendum, we decline to address it further.”

Avera said the referendum had not been added to the ballot, and therefore there will be no cost to the city to remove it.

Prior to the mayor’s petition to halt development last summer, the 400 block development proposal consisted of two buildings: one two-story, 9,000 square foot philanthropic center and new headquarters for the Community Foundation for San Benito County, and a second, three-story building with 8,000 to 11,000 square feet of ground floor commercial retail space and 14 to 22 condos divided between the second and third floor.

Private donors Randy and Rebecca Wolf have committed $900,000 towards the construction of the new foundation headquarters.

In November 2015, the city council first agreed to accept proposal ideas for the 400 block in hopes of spurring other economic development downtown. At the time, Darin Del Curto of the Del Curto Brothers Group told the council of his company’s interest in building there.

A 2015 appraisal of the 400 block property valued the land at $390,000. However, an updated appraisal conducted in September 2016 placed the grassy lot’s market value at $690,000. The second appraisal was not publicly disclosed before the council voted to sell the property.

Appraiser Steve Loos conducted both the 2015 and 2016 appraisal, the second of which was done a few months after the Community Foundation and Del Curto Brothers Group entered into an exclusive negotiating agreement with the city.

Although the agreement between the city, the foundation, and the Del Curtos is based around the $390,000 price point, another appraisal could be required due to the time passed since the last one.

Read BenitoLink’s coverage of the 400 Block:

Petition for referendum on 400 Block back on council’s agenda