After a long discussion behind closed doors, Hollister council unanimously, with Mayor Velazquez absent, votes to put 400 Block discussion back on agenda for next meeting. 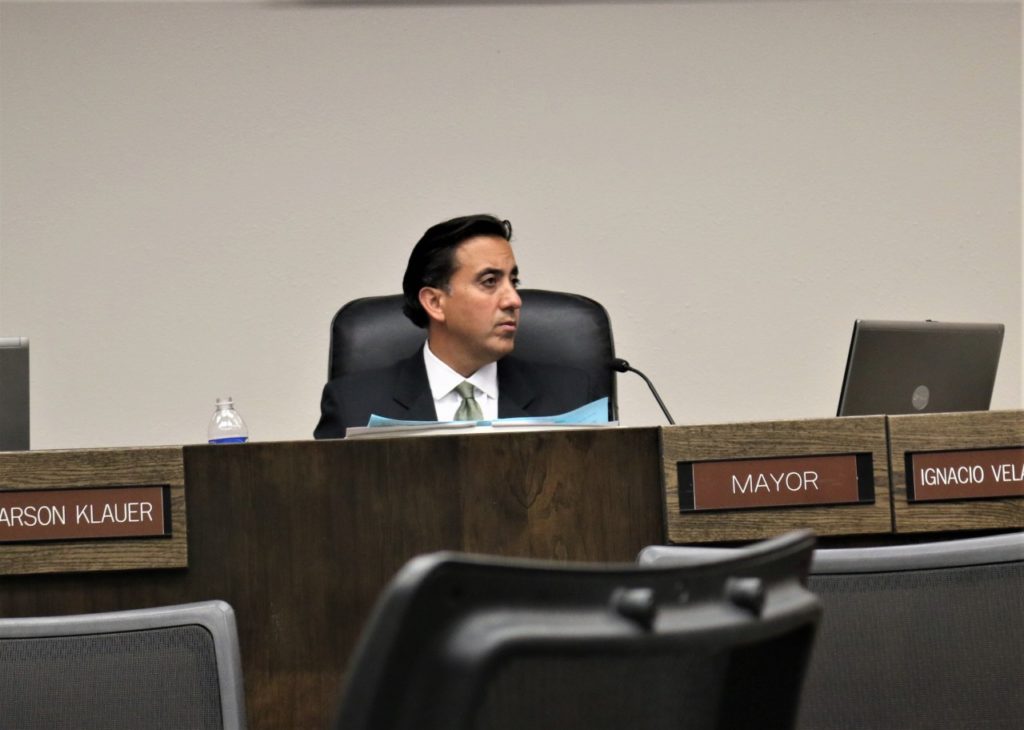 Mayor Ignacio Velazquez was absent from the closed door session in which the council voted for the petition to be added to next meeting. Photos by John Chadwell. After a lengthy closed session to discuss potential litigation during the Sept. 5 special city council meeting, the city council, minus Mayor Ignacio Velazquez, filed back into chambers and City Attorney Soren Diaz reported on the decision concerning the controversial 400 Block issue. Velazquez did not participate in the closed session because he has threatened to sue the city, accusing the council of taking away citizens’ rights to free speech and to vote on blocking development of the empty lot on the corner of San Benito and Fourth Streets in downtown Hollister.

Diaz explained that action was taken on the 400 Block issue because of a significant exposure to litigation related to the 400 Block referendum petition (by the mayor).

The next regularly scheduled city council meeting is Sept. 11, as the city continues to wait for a ruling from the California State Attorney General’s office on whether the resolution qualifies as a referendum that could place it on the 2018 ballot for a vote. Bill Avera, city manager, said the city is expecting to hear from the attorney general by Sept. 8, and not later than Sept. 15.

Even if the attorney general finds that the resolution does not qualify as a referendum, the issue is far from settled.

Avera said what is unfolding is only the first step in a long series of approvals and actions that must happen before construction can begin on the proposed mixed-use project.

“We believe it’s a worthwhile project and that it’s going to be great for this community,” Avera said. “At the same time, we want to make sure we’re getting the right information to as many people as possible so if we have to continue fighting the mayor and his supporters every step of the way and have constant dissension, that’s just not good for this community.”

Avera went on to say that those who want to go forward with the project are digging in their heels and probably don’t care what the mayor says.

“This is when politics in small communities becomes problematic,” he said. “We want to make sure that people in this community get along.”

Avera feels that the proposed development is the best project that has been offered the city in many years. He said while the project could be a good addition to the city the dissension is not worth ruining half the relationships in the community, at least for the present.

“There’s a misconception that we’re recounting votes and that’s absolutely not true,” he said. “We are just making sure that we are doing everything completely by the book.”

In a nod to changing decorum in public settings, before continuing with the regular session, Avera told the packed chambers that four chairs in the back were being reserved for people who wanted to livestream the meeting. He cautioned, however, that those seated nearby might find themselves on someone’s livestream. He also told the streamers that they could only do so during the meeting and not during breaks, because breaks were not considered public meetings.

Mayor Ignacio Velazquez recognized Sun Street Centers for its 49 years of service to communities and proclaimed September as National Recovery Month for the City of Hollister. Marciano Huerta, chief program officer, said it is the organization’s mission to provide education, prevention, treatment and recovery to individuals and families regardless of their income level. He said Sun Street has two sober living environments in Hollister, one for women and the other for men.

“I’m happy to announce that Sun Street is in the process of bringing in a treatment program for women struggling with addiction right here in Hollister,” he said.

The city council turned down a $2,500 contribution to the 12-Days of Giving campaign that raises money that is then matched by United Way to assist essential local nonprofits. Even though City Manager Bill Avera recommended the council approve the resolution because the Community Foundation, which has taken part in the campaign in the past, was not doing so this year,  Mayor Velazquez said he appreciates the efforts that nonprofits do, but he had concerns about continuing to aid them.

“I think we’re at that point, financially, where we can’t afford to do it,” he said for the record.

Councilman Ray Friend agreed with the mayor that the city could not afford to fund nonprofits. No one in the audience made any comment and the resolution died for a lack of a motion.

While the mayor was saying the city could not afford to fund nonprofits, he was in favor of this resolution that would pledge future transient occupancy tax (TOT) revenue to attract new hotels to Hollister and encourage upgrades to existing hotels. Councilman Karson Klauer, in particular, saw the irony of turning down nonprofits while voting for a resolution to benefit businesses.

“As a council, we decided about an hour ago that we weren’t comfortable giving $2,500 to the neediest kids in Hollister, and I don’t think we need to give another $1 million to somebody who’s going to build a hotel,” he said.

More details on this story coming to BenitoLink.

Negotiations between city and police association

Juan Guevara, a Hollister police officer, said he has been honored to serve Hollister as a police officer. He said in coming weeks the Hollister Police Association will begin negotiations with the city council. He commented that it was recently disclosed that the Hollister PD is one of the poorest compensated police forces on the Central Coast.

“We hope in these conversations we will change that and prevent more officers from leaving to go to other agencies in order to better provide for their loved ones,” he said.

He thanked all council members, leaving out a reference to the mayor, for taking the time to talk to the association on topics important to the local officers. He said he hopes for a fair contract.

The city council approved a resolution to authorize city staff to release a request for qualifications to provide design and construction support for the McCarthy Park project. Last June, the city announced it had been awarded a $660,000 grant to revitalize the park. 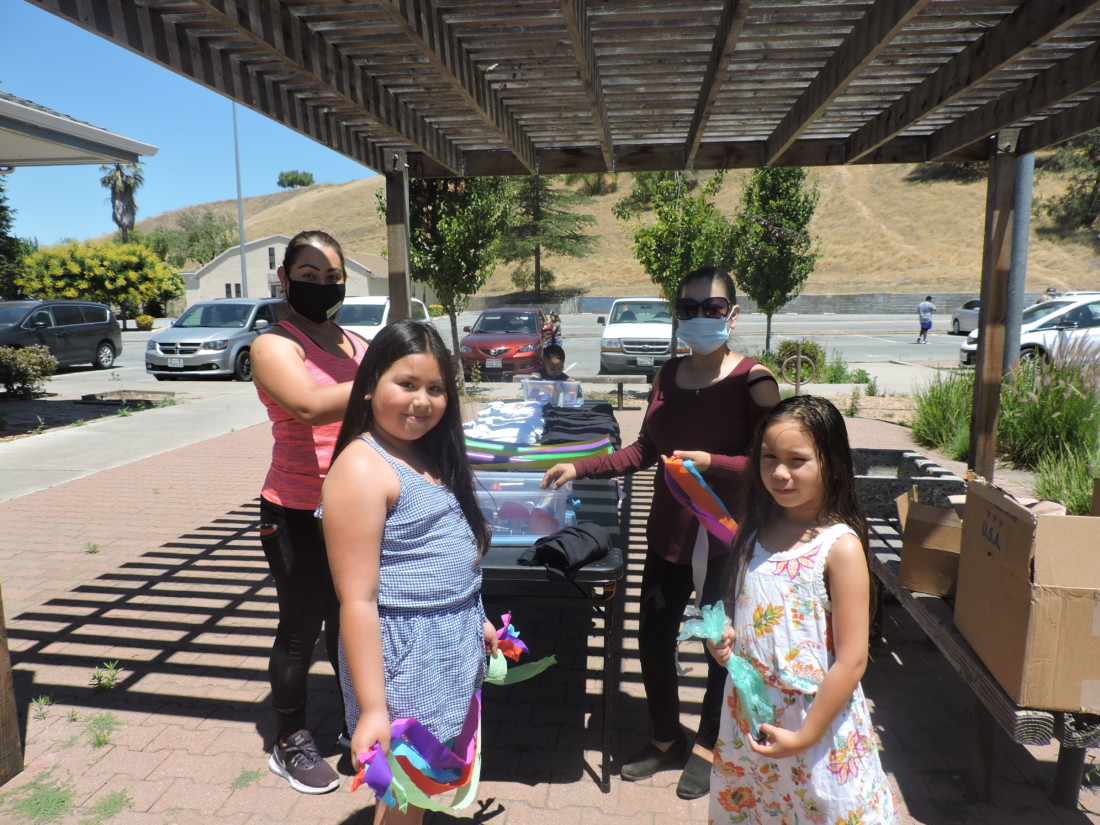