He leaves the department ‘at its best,’ says crime has dropped significantly since 2013. 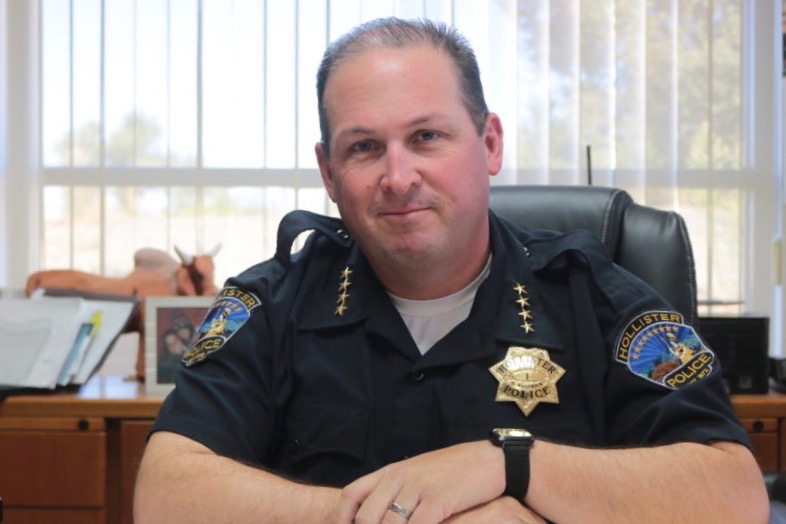 What started out as a journey to shorten David Westrick's daily commute turned into a career move to become police chief. Photo by John Chadwell.
×

Hollister Police Chief David Westrick is retiring in December. He announced the decision on his personal blog and Facebook; he told BenitoLink he’s leaving the department in order to devote more time to family and volunteering.

“The reason I’m retiring, number one my daughter is graduating from high school this year, and I feel super good about the things we’ve done here,” Westrick, 52, said. “I just got a report the other day; crime has gone down about 30% over the last six years. However, our calls for service have increased by almost 50%. We’ve been very fortunate with the staff we have. They work really hard.”

While Westrick doesn’t know who will take his place as chief, he said he assumes someone within the department will take over in the interim. He said he’s leaving the city in good hands with Capt. Carlos Reynoso and Lt. Dan Winn.

“I recommend they promote from within the department,” Westrick said, “especially with the rally coming. That’s a very specific skill set and extremely difficult.”

Westrick’s departure comes on the heels of Hollister City Manager Bill Avera’s decision to retire from his position effective Nov. 15. The police chief said he wanted to be clear he had no issues with the mayor or Hollister City Council. He also described Avera and former city manager Clint Quilter as great bosses who lead by example.

“I can’t think of a better time,” Westrick said. “I always told myself that I would retire when the agency was at its best and I knew this would continue. I’ve been doing this a long time.”

Westrick grew up in North Fork near Yosemite to a family committed to public service and volunteerism. He said his life has always been about serving. He transferred from the Los Banos Police Department to the Redwood City Police Department in 2001. He was already familiar with Hollister because he passed close to it during his then-daily, 208-mile round trip commute from Los Banos. He was also, as he said, “one of those guys who got called in for the rally for two or three years,” working under former police chief Bill Pierpoint and former captain Bob Brooks.

“It was ridiculous,” he said of the commute. “I knew someone who worked here and called and found out there were several positions open.”

Westrick submitted his paperwork for a lateral transfer to a patrol position with Hollister police in 2003. He became acting police chief in April 20, 2012 and permanent chief July 2, 2013.

When Westrick joined HPD and moved to Hollister, he said the decision was not about the money. In fact, he said he took a $2,000 per-month pay cut to work in San Benito County.

“It was about my kids,” he said. “Two-thousand bucks was nothing compared to time with my kids.”

As he prepares for retirement, Westrick said that despite HPD being shorthanded by 10-15 officers compared to national averages, the department has never been more efficient.

He said he pushed to hire motorcycle officers not only to protect school children, but to get drivers to pay more attention when behind the wheel. He said driving standards have decreased nationwide, which he believes is mainly due to cellphone use.

“Having an officer on a motorcycle is so much more mobile and easier to get around the schools,” he said. “Not only are they a deterrent when people see them, but also when they don’t see them. I saw how effective they were in Redwood City. When they come to a school [for] one day, you literally don’t have any speeders for a month or more. That’s what we want here.”

With three school resource officers shared among the local districts, school safety was at the core of the job, Westrick said.

“It was important that I get this done, and I have great partners at the school districts,” he said. “It’s at the point now that I want to do something else. I can retire right now and I can sell hammers if I want to.”

As he prepares for his departure, Westrick said he hoped to continue and even possibly increase his volunteering efforts.

“I still want to do the torch run, the polar plunge and all the things that can be done to enhance the community just by being an example,” Westrick said. “Staying involved with the Relay for Life, Junior Giants, all those things, is important.”

One thing he doesn’t want to get involved in is politics.

“It’s divisive and it’s counterintuitive to things I want to do,” he said. “I’m not trying to be Switzerland. I’m just trying to get along with everybody and not worry about the politics of a situation. Going forward, I’m looking for volunteer opportunities.”

Before he donned a police uniform, Westrick dabbled in journalism and even held a job as a radio disc jockey in Fresno.

“I might do some writing. I think I have a couple books in me,” he said. “I’ll continue being a Rotarian, working with the different boards I’m on and my volunteer work with California High School Rodeo and the board of directors for the San Benito County Saddle Horse Show. I think it’s just time to step aside and let someone else do this. Change is good.”