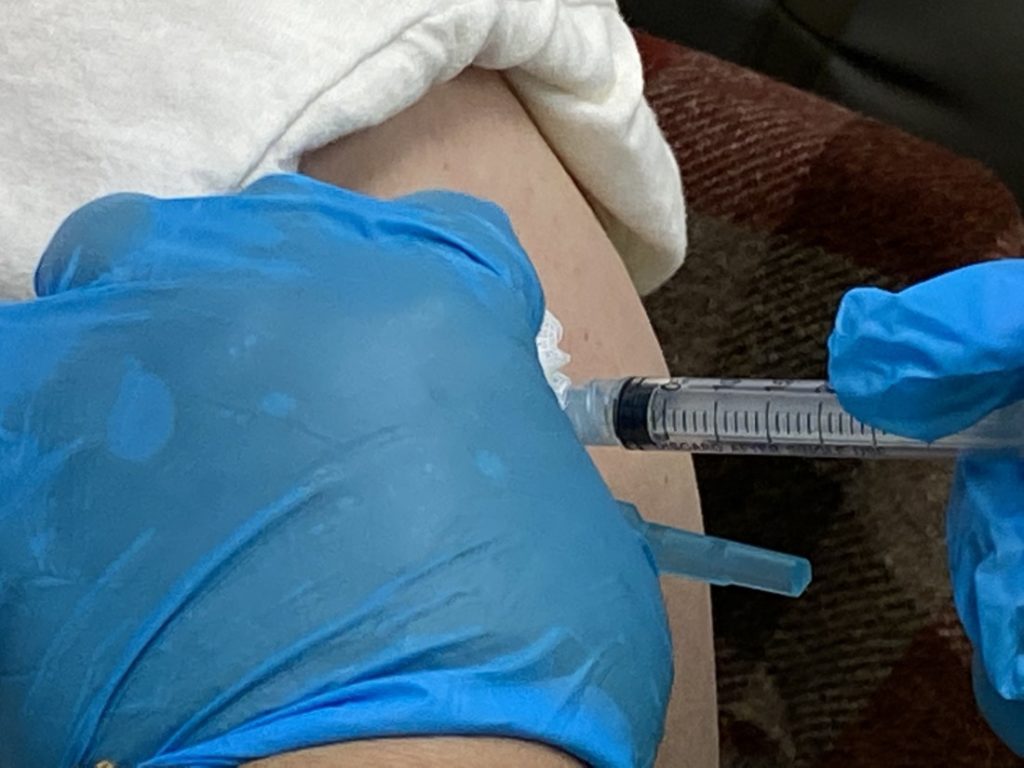 Administration of a COVID-19 vaccine. Photo by Leslie David.
×

After a month-long investigation by the San Benito County Health and Human Services Agency, the county has concluded that the San Benito Health Foundation (SBHF) gave COVID-19 vaccinations outside of Phase 1A. According to County Public Information Officer David Westrick, allegations made in January were substantiated.

“A detailed letter outlining requirements and necessary steps that need to be taken by SBHF to receive future allocations through the state and county allocation system was sent on March 2, 2021 to SBHF,” Westrick wrote in an email.

BenitoLink requested a copy of the letter and other documents from the county and San Benito Health Foundation, but has yet to receive them. The county also did not indicate whether Blue Shield’s new role as the statewide third party administrator would change how vaccines are distributed among providers.

San Benito Health Foundation is one of San Benito’s vaccine partners, and began administering vaccines on Jan. 4. Allocations of doses from the county to the foundation stopped when the investigation began at the end of January. According to data from the foundation dated Feb. 23, they received a total of 1,600 doses and have administered 1,579.

San Benito County began vaccinating groups within Phase 1B on Feb. 15, about three weeks into the investigation. The Centers for Disease Control and Prevention include health personnel and long-term care facility residents in Phase 1A. Phase 1B includes frontline workers such as firefighters, police and correctional officers, food and agriculture workers, the education sector, and daycare workers. Residents over age 75 are also included in Phase 1B.

On March 3, San Benito Health Foundation CEO Rosa Vivian Fernandez said she had not read the letter sent by the county, and was unaware of the investigation’s findings. She said the health foundation is more transparent than San Benito County regarding who they have vaccinated. The foundation’s data includes age, ethnicity and industry.

Following the initial call, Fernandez did not respond to BenitoLink’s further request for comment and whether San Benito Health Foundation would abide by requirements mentioned by Westrick and set by the county to begin receiving vaccine allocations again. Fernandez previously told BenitoLink that she would be available to speak on March 5.

Though the county used to make vaccine information available in an online dashboard, it took down that information in February. County Health and Human Services Agency Director Tracey Belton told the Board of Supervisors on Feb. 23 it did so because it was too much information to track and that the data differed from what the state presented because residents were going outside the county to be vaccinated. The county now refers residents to the state’s COVID-19 dashboard.

According to vaccine allocation data on San Benito Health Foundation’s website, as of Feb. 23 it had administered 789 first doses and 780 second doses.

Of those, the data shows the foundation administered 140 doses to its staff and volunteers, 31 to urgent care workers, 482 to in-home health services workers, 497 to food and agriculture workers, 15 to health care staff, five to assisted living facility staff, three for childcare, one for medically retired police, 106 for age 75 and up, and 253 for age 65-74. Eighty-five were “orphaned” doses, which refers to vaccine left-over when someone scheduled to receive a vaccine doesn’t show up and the dose goes to someone else.