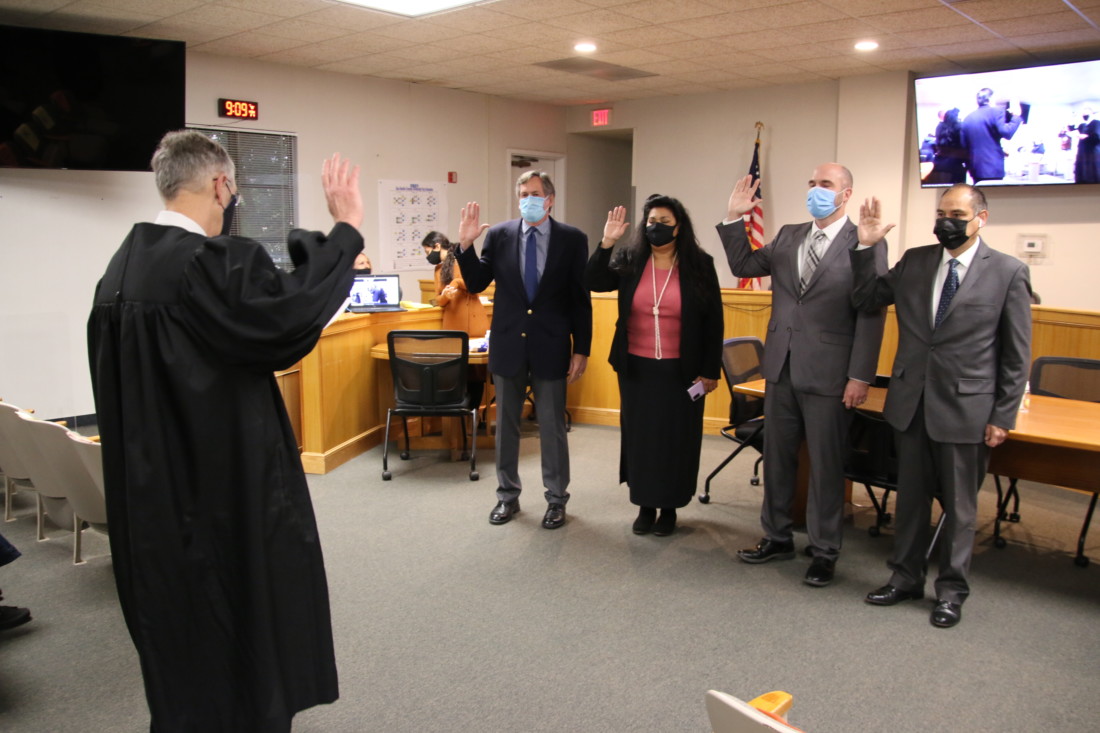 After the ceremony, the three new supervisors—Kollin Kosmicki in District 2, Bob Tiffany in District 4 and Beatrice Gonzales-Ramirez in District 5—spoke to BenitoLink about why they ran, how their experiences makes them feel they’re qualified to lead the county, and what they hope to accomplish from day one.

As the founder of San Benito Live and a journalist who has reported on local government, Kosmicki said he saw public service as a higher calling and felt his reporting experience gave him an insight into local politics. He wrote recently that he is selling his website to avoid any perception of a conflict of interest.

Kosmicki said that even though he ran as an advocate of slow growth, the response to COVID-19 is the top priority. As a small business owner he said he understands, to a certain extent, what small businesses are going through.

“It’s devastating to them and their families,” he said, “but we do have to balance public health and figure out how to support the business community. It’s time to reconsider a countywide mask ordinance to make sure we’re aligned with the cities.”

He acknowledged that most residents have complied with city mask ordinances, but wants to put the onus on businesses to hold customers accountable by insisting they wear masks.

“We don’t have the resources to send out sheriffs and code enforcement to either warn people or give them a ticket if they insist on not wearing a mask,” Kosmicki said, adding that while enforcement would be included in a countywide mask ordinance, it could only work if “businesses are held accountable.”

He said a message also has to go out to residents.

“We can’t have these household gatherings, which is probably the biggest problem,” Kosmicki said, “and the most difficult to deal with from a government perspective. We cannot continue to allow this. They are part of the problem by having parties, not social distancing, not wearing masks.

“We can’t allow a continued state of chaos,” he continued, “which is what we’ve had over the last several months. I will be pushing for the mask ordinance, putting in enforcement mechanisms, not to penalize people but to make sure we’re all on the same page. We have to do it because the pandemic is only going to get worse and we have to do more than what we’ve been doing.”

As president of the San Benito County Business Council and a business owner of over 30 years who served on a number of boards and committees, Tiffany feels that he was a logical replacement for District 4 Supervisor Jim Gillio, who resigned last July because of COVID-19 impacts on his business. Tiffany said after he sold his car dealership in 2019, several community members approached him to run for supervisor. State Senator Anna Caballero even recommended that Gov. Gavin Newsom appoint Tiffany to the position shortly after Gillio stepped down.

Tiffany said he wants to help “shepherd the board and community through the pandemic.” He said even though vaccines are beginning to arrive in San Benito County, he believes it will be at least six months before the community moves beyond the pandemic. He said he has little tolerance for those who flaunt their defiance of wearing masks.

“At the same time, we have to be sympathetic to small businesses in the community and see if we can find a way forward to help support them while being careful from a health standpoint, which has to be our first priority,” he said.

Tiffany wants to see the county move forward with economic development as soon as possible, “so we’re not just not supporting the existing businesses the best we can during this difficult time, but to bring in new businesses and jobs in order to expand the revenue flow into the county.”

He described San Benito County as being on the front lines of the pandemic and said counties should have more input with the state’s decision-making process when it comes to COVID-19. He also said inserting San Benito County into the San Joaquin Valley Region was a mistake.

“It doesn’t make sense that we’re in with San Joaquin Valley,” Tiffany said. “We should be tied to Monterey and the Central Coast, and from a commute pattern and how we interact, certainly Santa Clara County. Geographically, we’re just not connected.”

While he said he understands what small businesses are going through, the first priority is to protect people. He remarked that out of his San Benito High School graduating class of 1972, two of his classmates, Noe Montoya and Frank Halayay, have died of COVID-related issues.

Gonzales, who defeated incumbent Jaime de la Cruz in the March primary election, described the Jan. 4 swearing-in ceremony as “10 months in the making.” She said she ran for supervisor because she was not happy the way the city and county governments were being led. She said as a 10th-generation Californian, she saw local government as dysfunctional with no follow-through, particularly in how the county dealt with the mask ordinance, which she intends to address during her first supervisor meeting on Jan. 12.

Gonzales said the conditions of local roads are also a concern.

“The residents are tired and want answers,” she said, then admitted she couldn’t promise she had answers, “but I’ll definitely rattle some cages and knock on doors to find out why we can’t get what we need as a community. I don’t have the answers. I’m walking into this job brand new with no formal training other than I do possess a law degree. I am listening to the concerns of the community and we have a lot of unhappy people here.”