Raymond Anthony Andrade getting ready to raise the LGBTQ flag at City Hall in 2020. Photo by Robert Eliason. 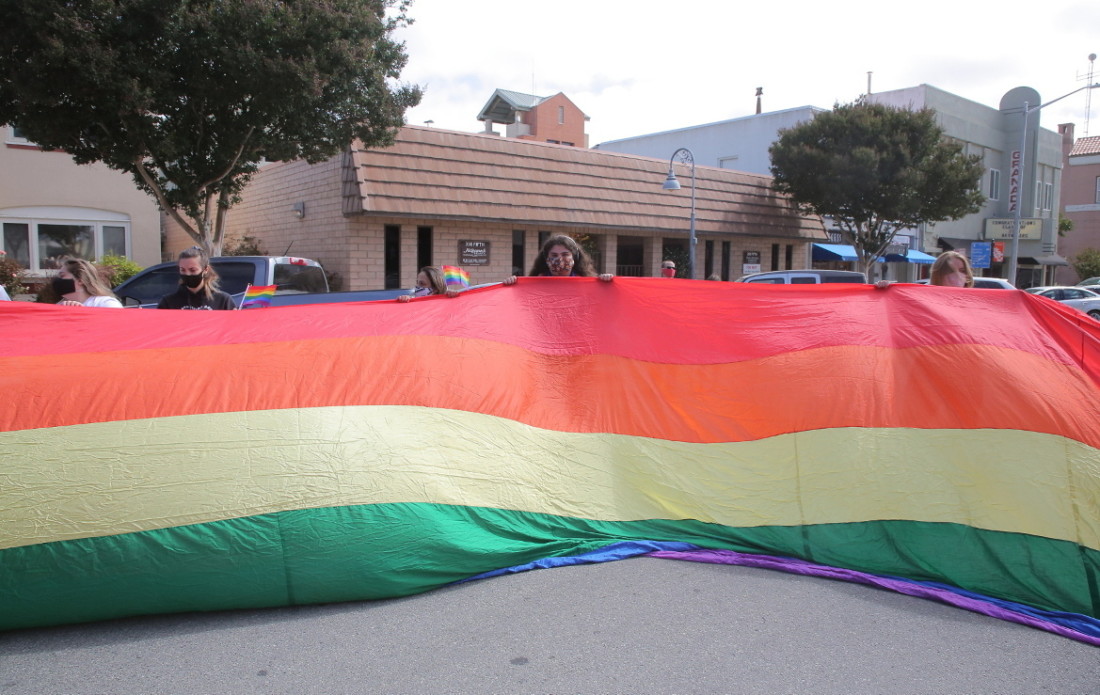 Emotions ran high as the Hollister City Council passed two related resolutions on April 19: the installation of two additional flagpoles in front of City Hall in a 4-1 vote, and the raising of the LGBTQ flag for the month of June in a 3-2 vote.

The tension was obvious in Councilman Rolan Resendiz’s comments, directed at Councilwoman Honor Spencer and her walking out of chambers during discussion. Spencer did not respond to BenitoLink’s request for a comment about her reaction. She did, however, return to the dais minutes later.

Spencer has said she supports the gay community, has gay members in her family, and that she also supports, to an extent, raising the flag.

Councilman Rick Perez voted against the flagpoles because the city lacks an ordinance spelling out which flags, besides the LGBTQ flag, could be flown, and because he preferred to have the poles erected at Dunne Park to accommodate large gatherings. He and Spencer voted against raising the LGBTQ flag for an entire month, which they said would result in a multitude of other organizations possibly suing the city if their flags were denied to be raised. Perez suggested raising the LGBTQ flag for one week in order to allow as many as 51 other groups to have the same opportunity.

The estimated cost for a single pole was $30,000, but when the conversation turned to erecting two poles, Mayor Ignacio Velazquez asked City Manager Brett Miller if it was feasible to obtain two flagpoles for $30,000. Miller said he didn’t know. By the time Resendiz made the motion to fund two poles, another $10,000 had been added to the resolution.

During public comments, Aislinn Barnes and Elia Salinas supported the additional flagpoles and raising the LGBTQ flag because it demonstrated the city supported this marginalized community.

“We may be created, quote-unquote by God, but we are not treated equal and that is why we’re discussing this and why Rolan Resendiz brought this up three years ago,” Salinas said. “For anyone to say this is a divisive issue, this is not a divisive issue. It is inclusive.”

Other residents said they were concerned about the legal ramifications to the city if the flag was allowed to be raised.

Resident Tony Avia rationalized that by designating a pole to fly the LGBTQ flag it would make the pole a “forum for public speech that would expose the city to First Amendment issues that would exclude some groups in favor of others.”

Other residents opposed raising the flag as they argued the American flag already represented everyone and that if one group’s flag was allowed, other groups would follow.

“There would be no way to accommodate everyone and that’s why we have the American flag,” Courtney Evans said.

Avia suggested the council continue the decision for further discussion.

“A unity pole is causing more division, even amongst the members of the council,” he said. “I recommend you take a step back and consider what we’re doing before it gets out of control. We do not want to glorify riots. This is causing division and it must stop.”

When the discussion turned to voting to raise the LGBTQ flag, Spencer telegraphed her intention of voting yes, but only if the unity flagpole was already up. While she did support raising it in 2020, and even though she objected to it being on the same pole as the American and POW flags, she said she would vote for it to be flown for only a single day.

Resendiz asked Miller if he could guarantee that one or both poles would be erected before June. Miller said he could not. Resendiz said if it were not to happen, he still wanted the flag to fly for the entire month.

“I intend by the time I leave this council for us to bring more visibility, inclusion and welcoming our LGBTQ citizens to the city of Hollister by hanging a LGBTQ+ flag up on that pole for an entire month,” he said.

Resendiz went on to say how sad, hurt, angry and embarrassed he was.

“I want you to go home and watch this video of you trying to justify why we’re going to be treated as second-class citizens and have the flag flown at Dunne Park. And at the last meeting we had you comparing the KKK and the flag of Muslims. That’s ignorant and embarrassing.”

It was at this moment that Spencer called out, “I’m being bullied.” Perez asked repeatedly to bring the discussion back to chambers and asked Resendiz to “not use the condescending words” and questioned Resendiz’s ethics. The mayor intervened and let Resendiz continue.

Spencer walked out of chambers, as Resendiz said, “I feel ashamed we’re even entertaining this conversation and it’s being politicized.”

Councilman Tim Burns said he couldn’t fathom that there would not be a city policy in time that would define and regulate what flags could be flown in front of City Hall. Miller assured him the policy would be done in time for the next meeting. Burns said he wanted to curb some of the drama and voiced support for flying the LGBTQ flag for the month of June.

“I’d like to see there be goodwill and a spirit of cooperation on this council and I believe we all want to be there, but have our individual concerns,” he said.

The mayor said he was disappointed to hear some of the comments but thanked everyone for their comments.