After two years as superintendent of Hollister School District, Dr. Lisa Andrew caught some by surprise when she announced she was leaving to join an educational nonprofit. 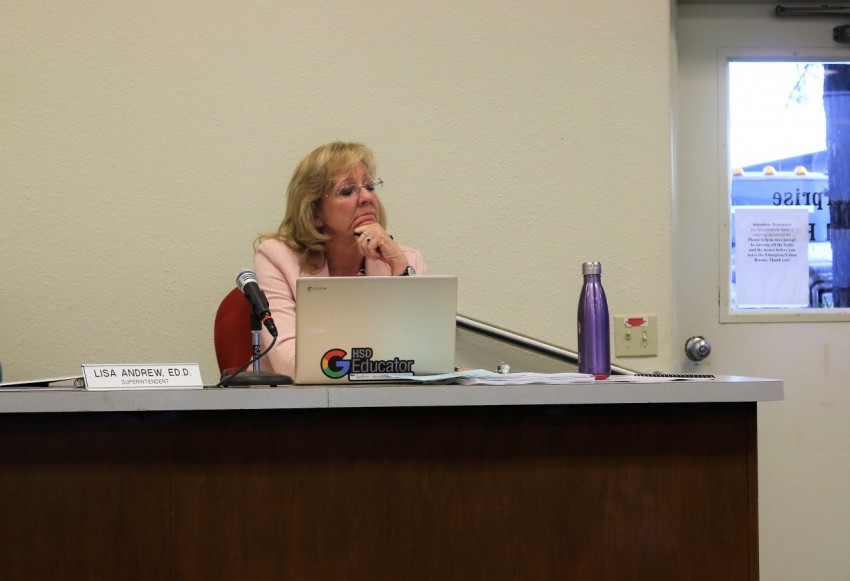 Dr. Andrew said it was an "awesome opportunity" to take on the CEO position of the nonprofit. Photo by John Chadwell. Barely two years after taking the position of Hollister School District superintendent, Dr. Lisa Andrew suddenly resigned from the post to return to work in the nonprofit sector with the ALearn/Silicon Valley Education Foundation (ASVEF). Dr. Andrew said she is returning to an area she is comfortable working in.

San Benito County Superintendent of Schools Krystal Lomanto told BenitoLink June 18 she was surprised at Dr. Andrew’s sudden departure. She said it will be the district school board’s decision whether someone will be promoted from within or a search will be conducted outside the area.

“We like consistency and it’s difficult when there is continual turnover with the district,” Lomanto said. “We want what’s best for the district because if it’s successful, the kids will be successful.”

Andrew described her career path as a traditional trajectory, beginning as a teacher, a coach, and then an assistant principal and principal at various school districts. Before coming to Hollister, she worked for the County Office of Education in Santa Clara, as well as a two-year stint with an educational nonprofit. She was hired as the superintendent of the Hollister School District on May 17, 2016.

She described her departure as an “awesome opportunity”.

Andrew gave her notice to the district June 19, and said her final day has not been determined as of June 21, when she spoke by phone with BenitoLink.

“We haven’t determined that yet,” she said. “The board is currently working on finding an interim superintendent.”

Andrew said her two years with the district were productive, with the greatest achievement being the installation of the Capture Kids Hearts, a methodology of building relationships between teachers and students.

There has been extensive modernization work completed at a number of the district’s campuses that includes beefed up security, new lighting, and technology integration between teachers and students, Andrew said. Additionally, there will be a new school built at Santana Ranch.

“We have a balanced budget and no deficit spending,” Andrew added. “We settled with the [teacher’s] union. This work is never done and that’s what makes it exciting. There’s always more opportunities to give the kids and the teachers.”

Andrew said she has total confidence in the school board and the staff to continue to do great things.

Lomanto said superintendents normally stay with a district two or more years, depending on the personalities of the district and the superintendent. She said she could not comment on Andrew’s performance, which she said was beyond the scope of her position.

“Lisa has only been here a couple years and from my minimal interactions with her she’s always seemed professional and committed to the organization,” Lomanto said. “She has focused on building a positive culture for students and staff. The last few years they’ve focused on math and English language arts curriculum across all the schools.”

School board member Rob Bernosky told BenitoLink by text that the board’s first priority is to hire an interim superintendent that can be a caretaker of the progress made so far.

“Generally speaking, there is a pool of candidates for that position and we begin interviewing June 29,” Bernosky wrote. “After an interim superintendent is chosen, we can begin discussions when to release Dr. Andrew from her contract.”

Bernosky also said that once the interim superintendent is chosen, depending on his or her desires, the board needs to start recruiting for a permanent individual. He said the board wants to move as quickly as possible in order not to lose the momentum Dr. Andrew made with capital and academic improvements.

“Her team is doing exceptionally well and they need to continue their work without distractions inherent in too many leadership changes,” Bernosky said. “The district must not lose momentum with the ugly situation of litigation with the County of San Benito regarding accounting issues, developer fees, property taxes, and refusal to give us information regarding those items.”

He said the interim and whomever ultimately is hired as the permanent superintendent must be capable of handling the trial preparation to be heard in Superior Court.

In an email to its supporters, ALearn/Silicon Valley Education Foundation wrote of Dr. Andrew that she “…comes to ASVEF as a highly respected and successful leader in education. Her experience in education is extensive, having previously served as the Director of the Educational Services branch at the Santa Clara County Office of Education and Regional Executive Director of the nonprofit Partners in School Innovation.”

Andrew was named Woman in Leadership grant recipient by the Silicon Valley Chamber of Commerce and is the Association of California School Administrators 2013 Valuing Diversity state award winner and 2015 Partner in Educational Excellence award winner for Santa Clara County.

Schools in the dark about budget shortfall