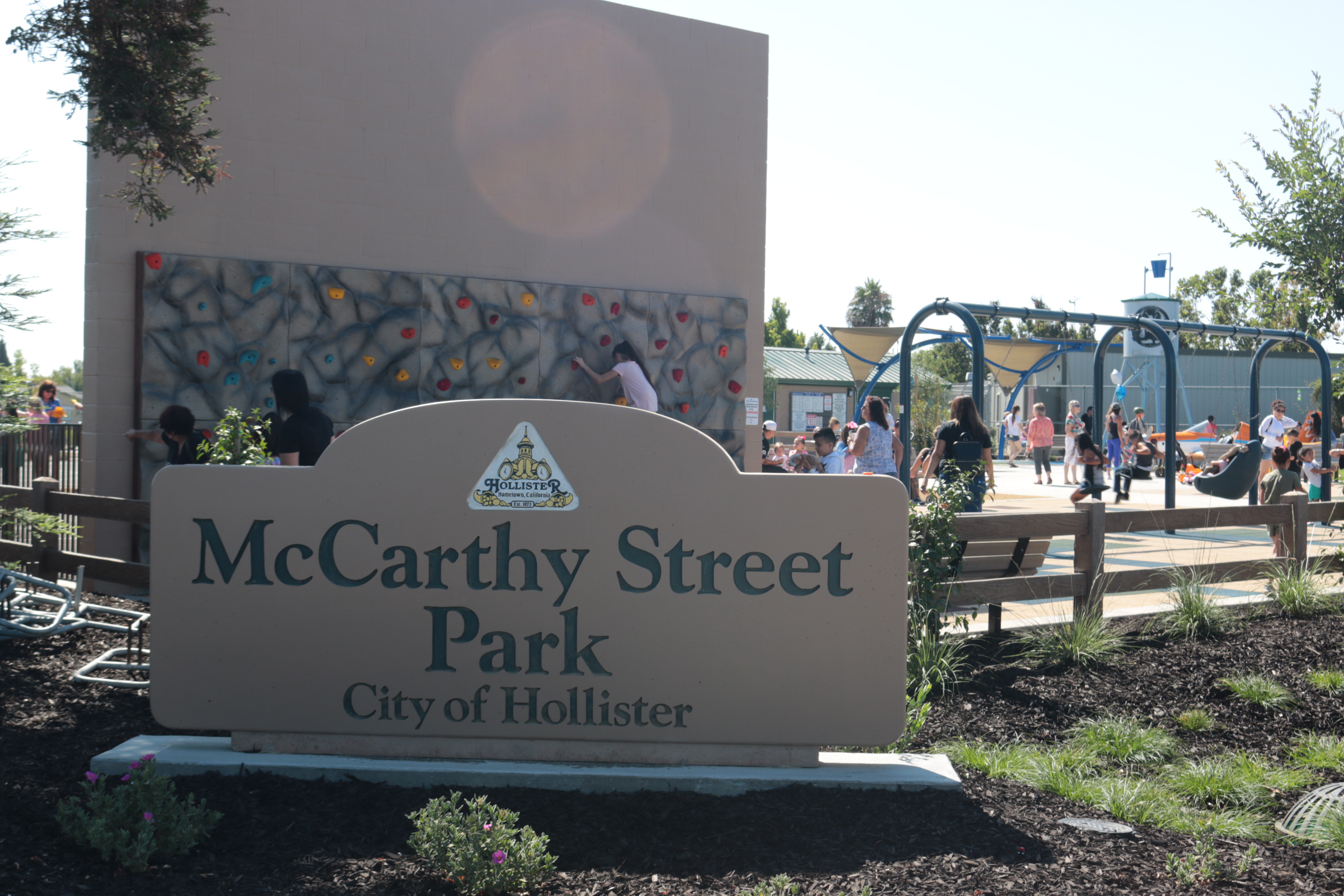 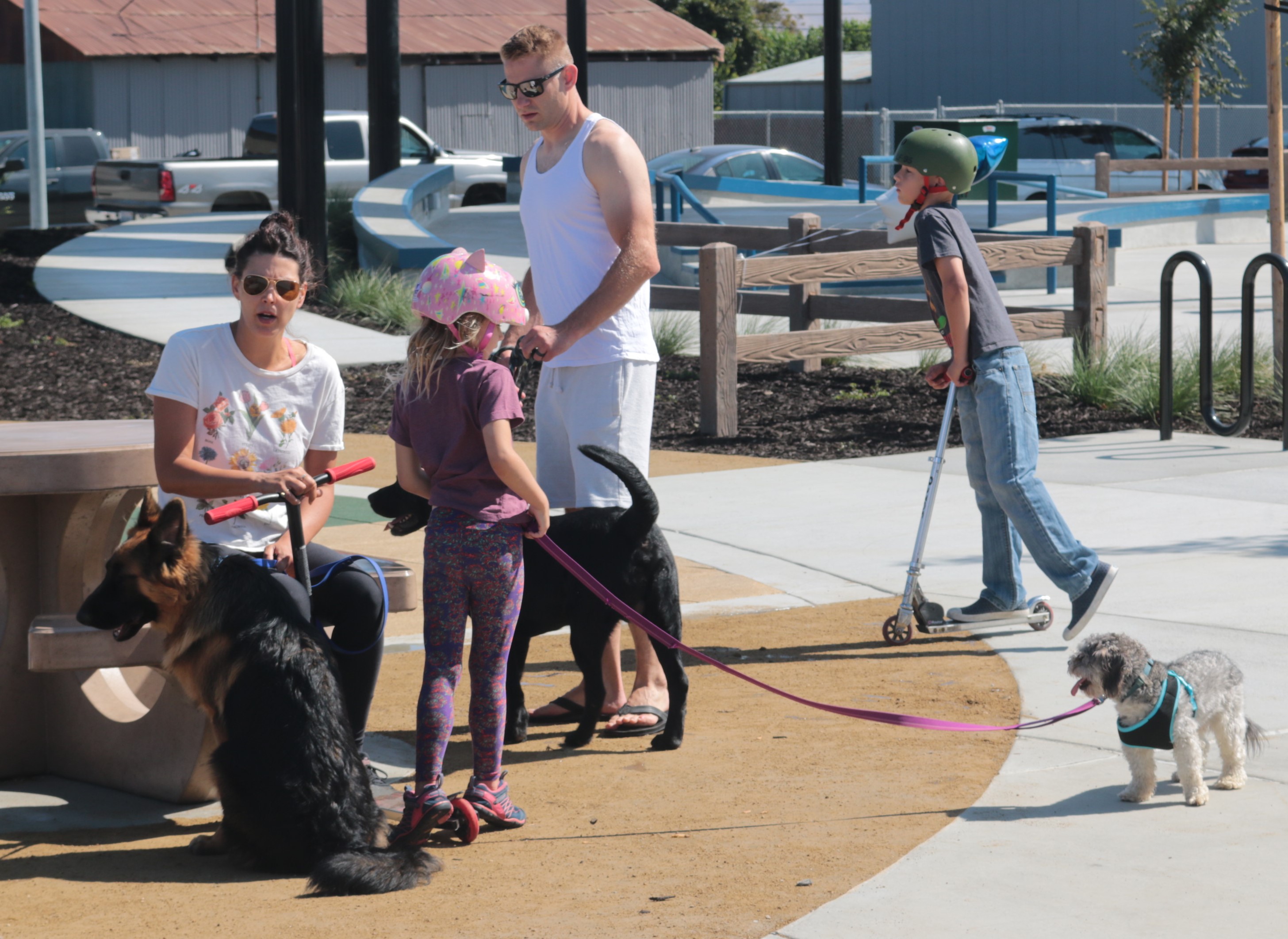 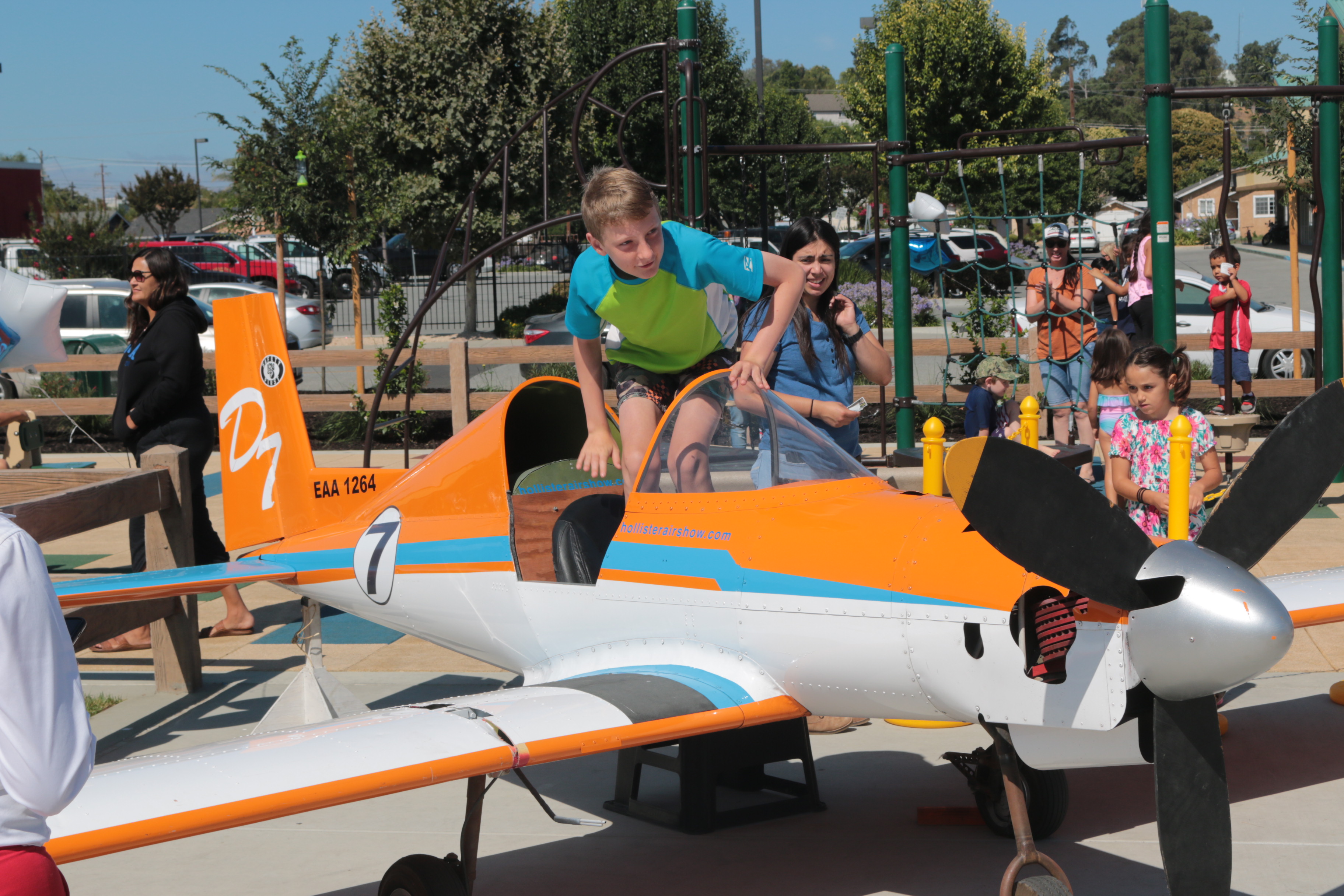 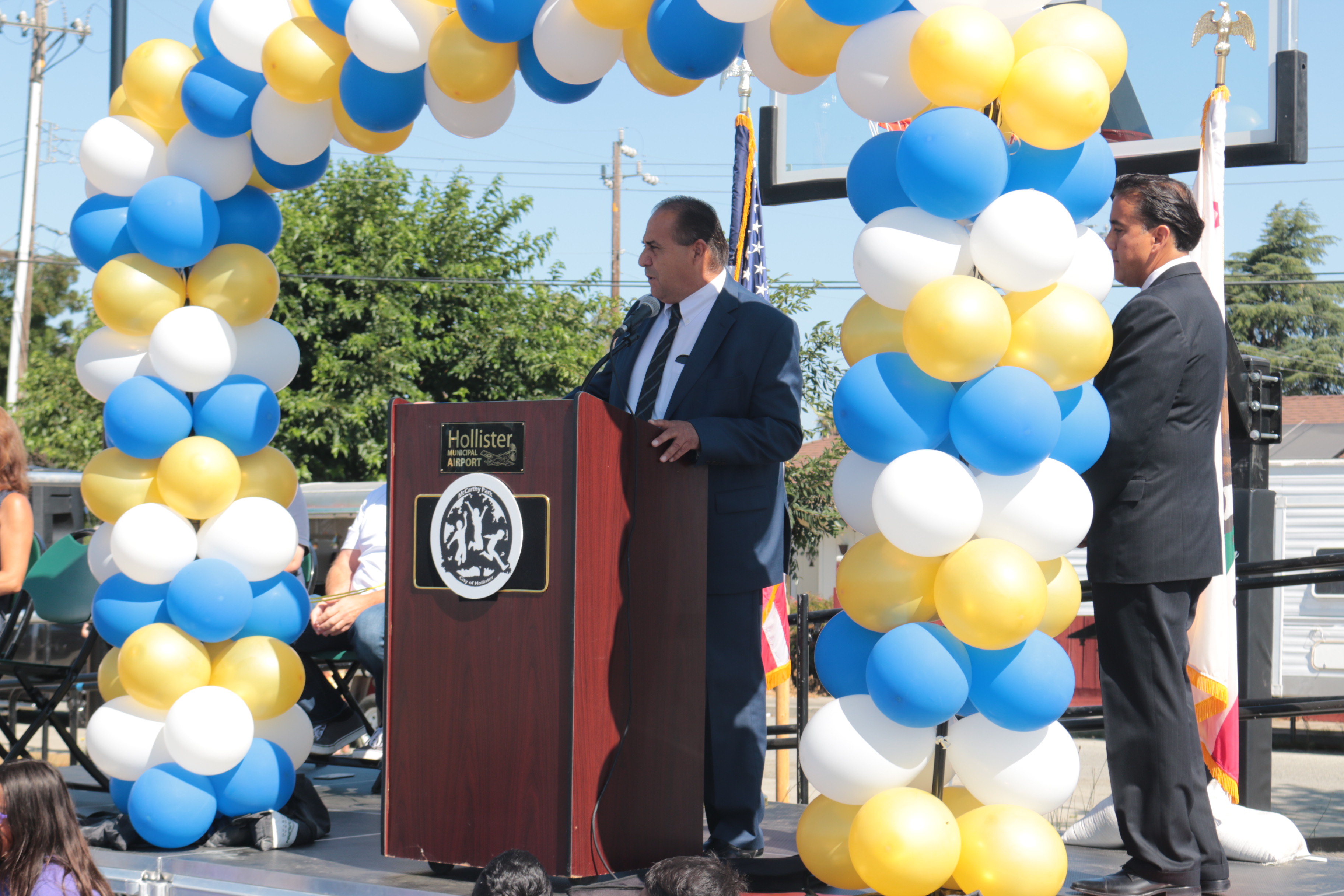 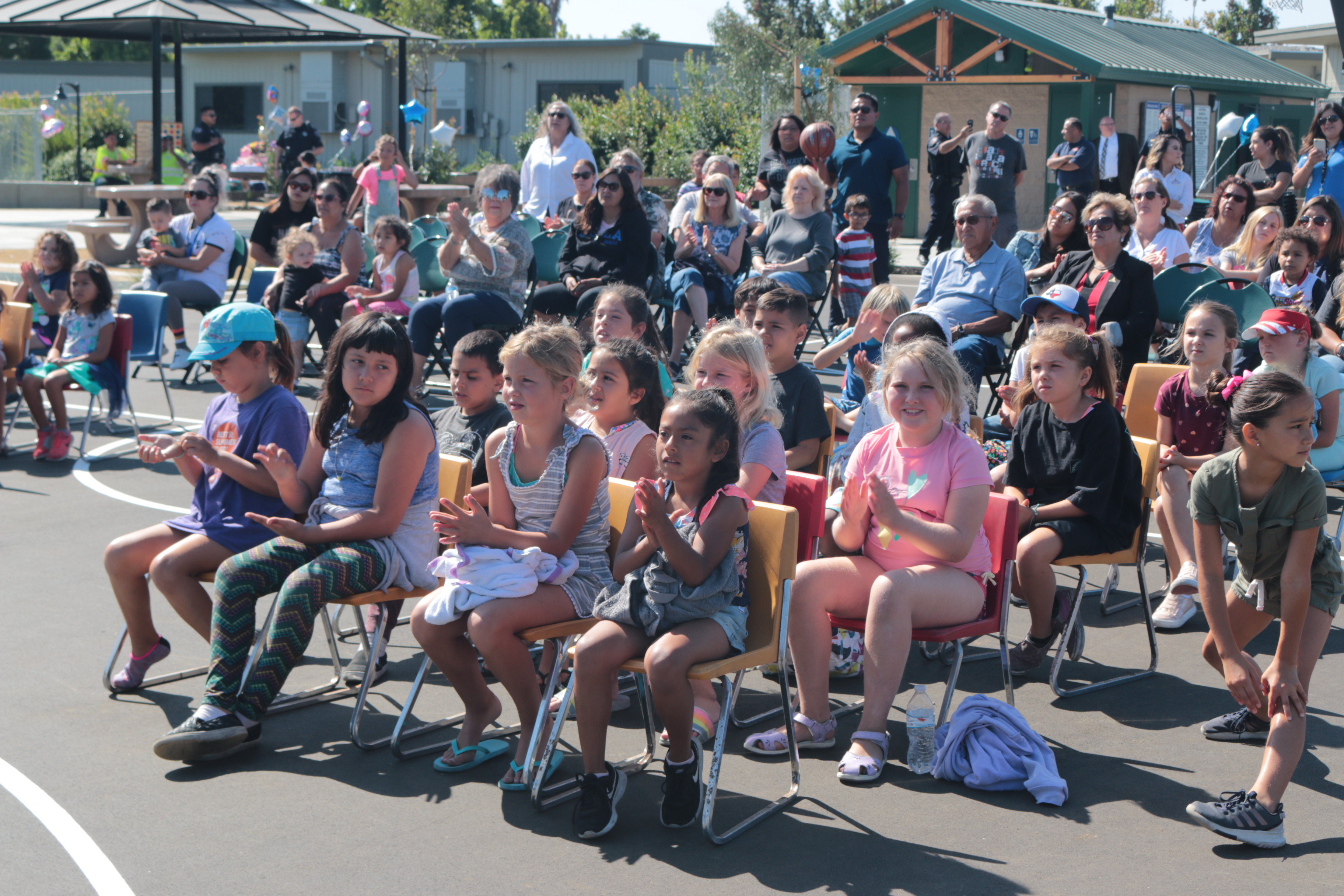 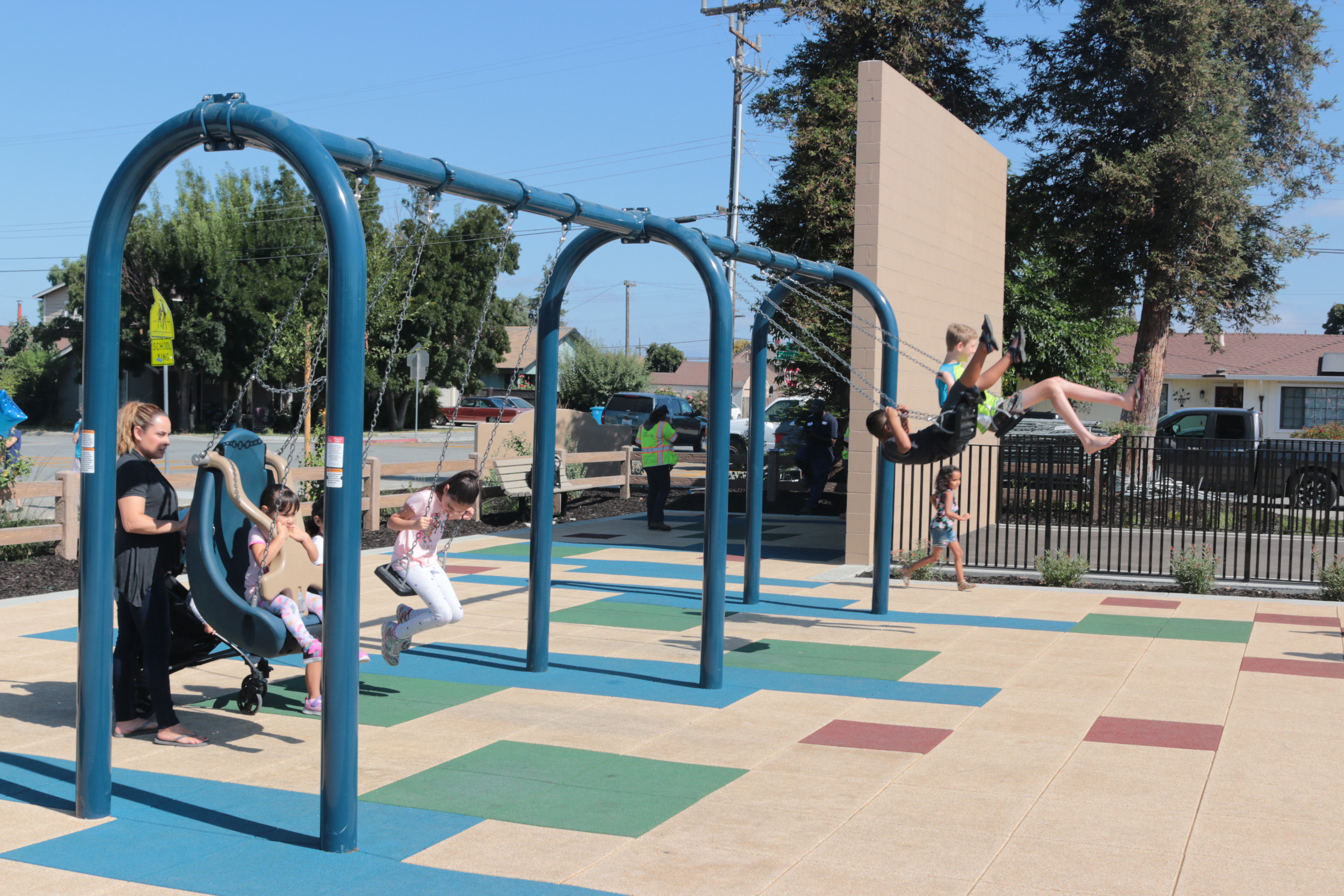 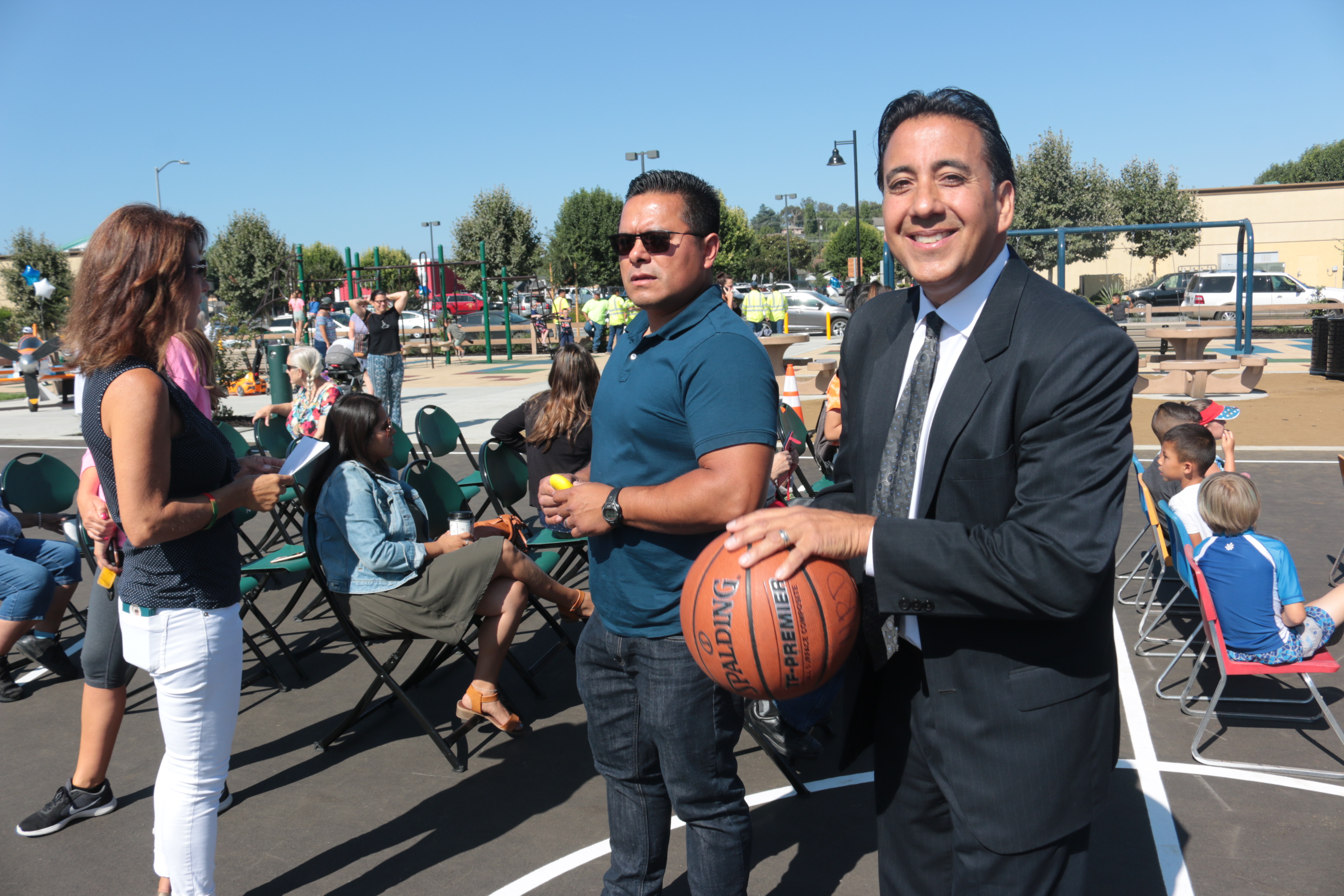 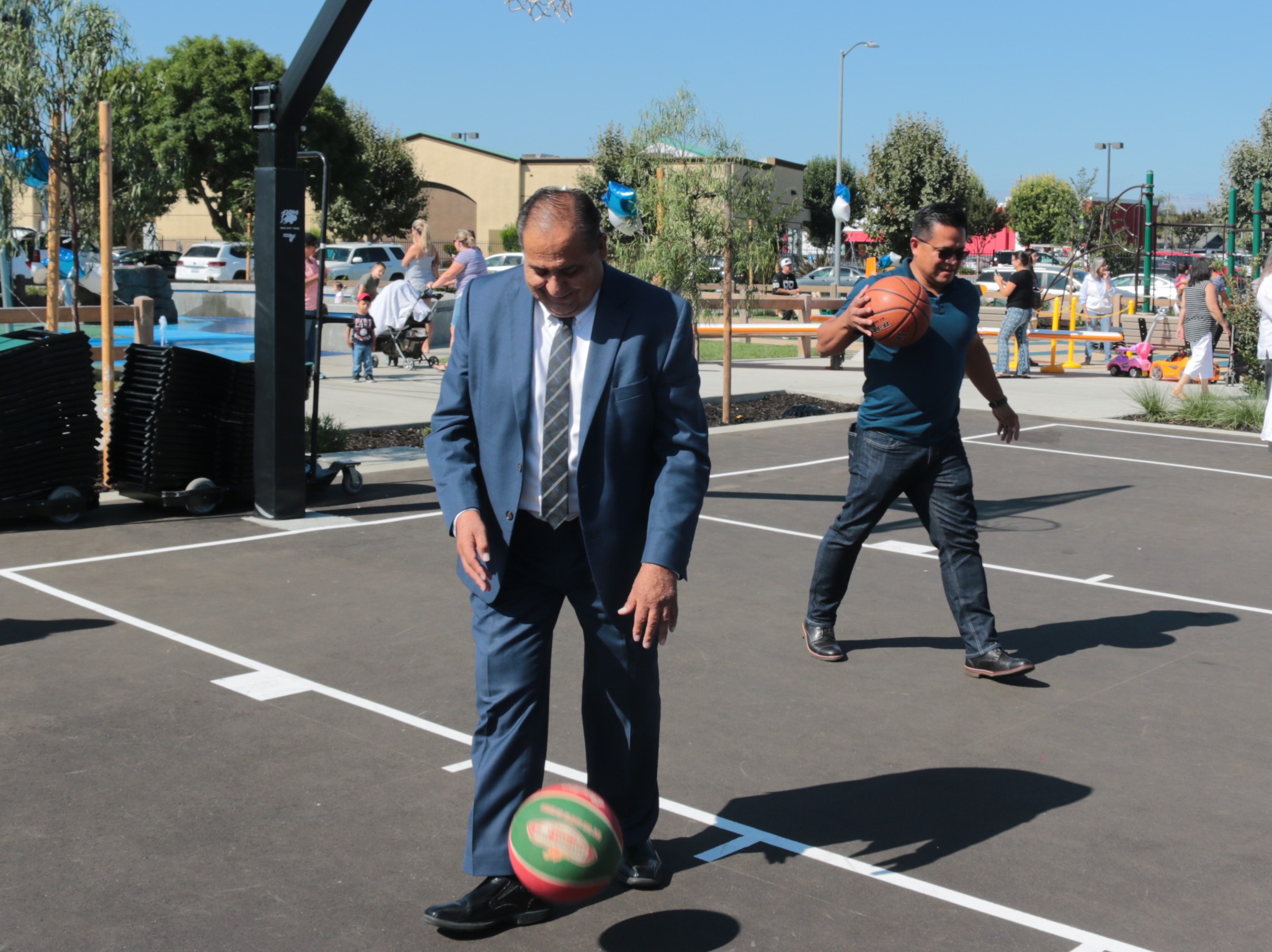 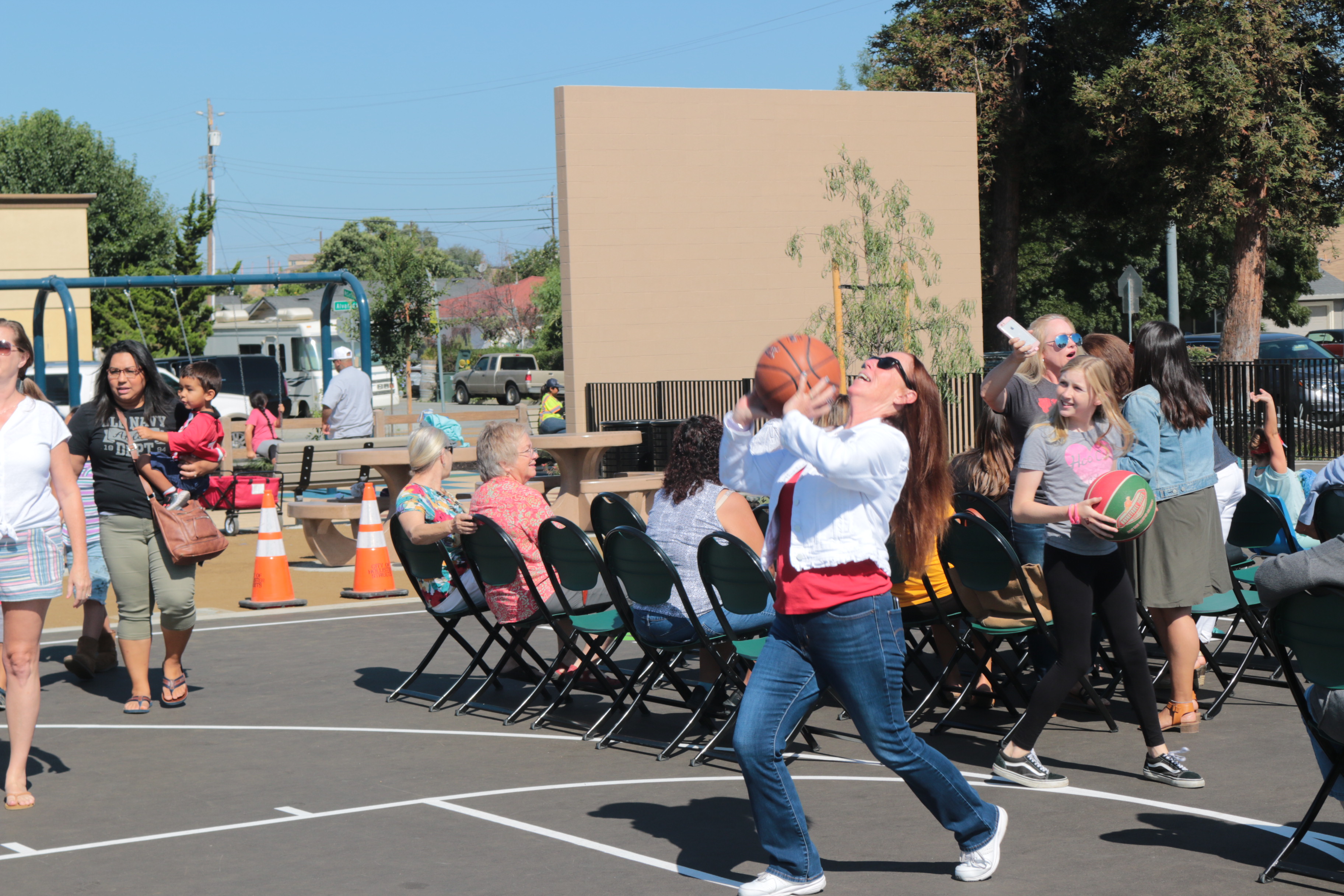 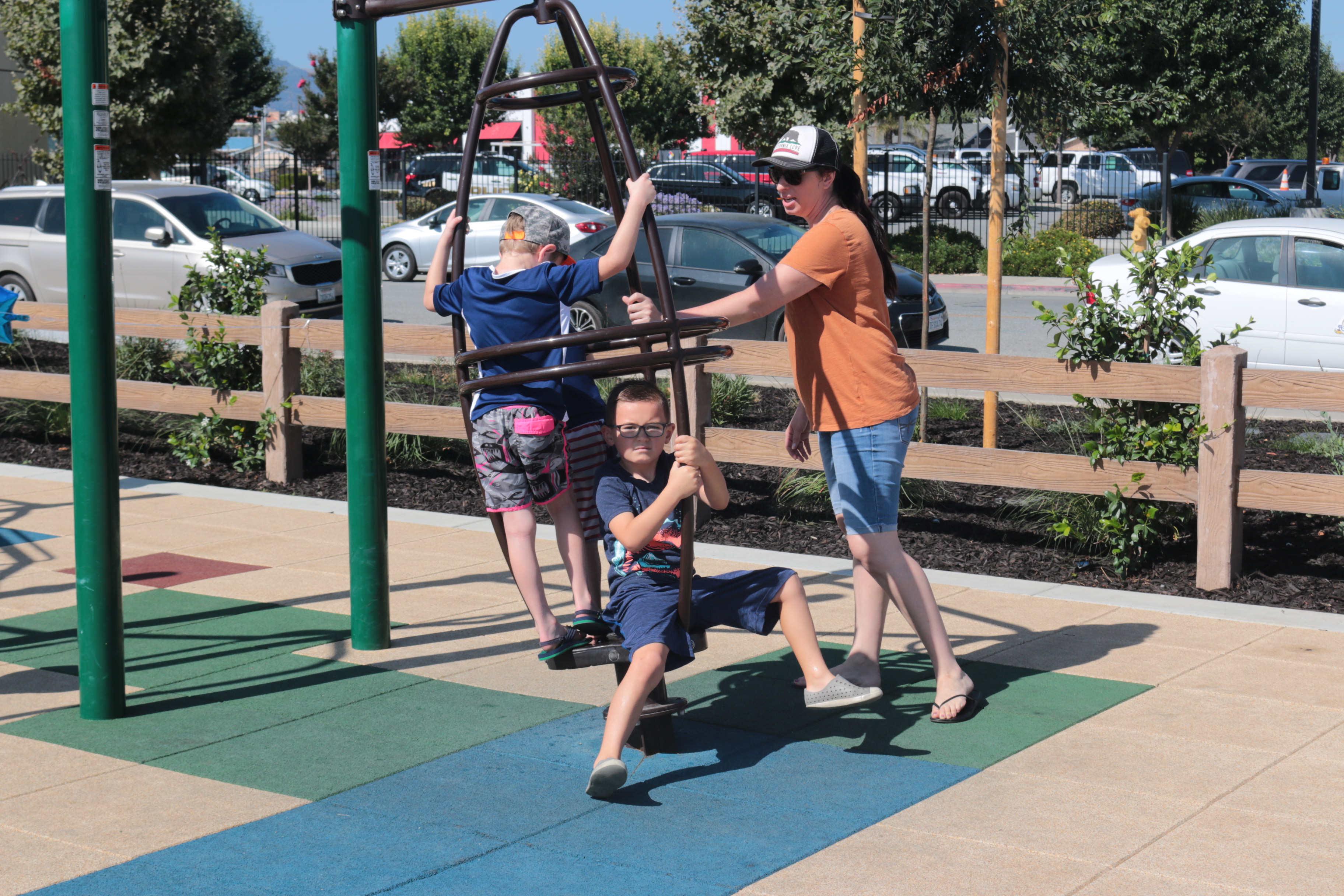 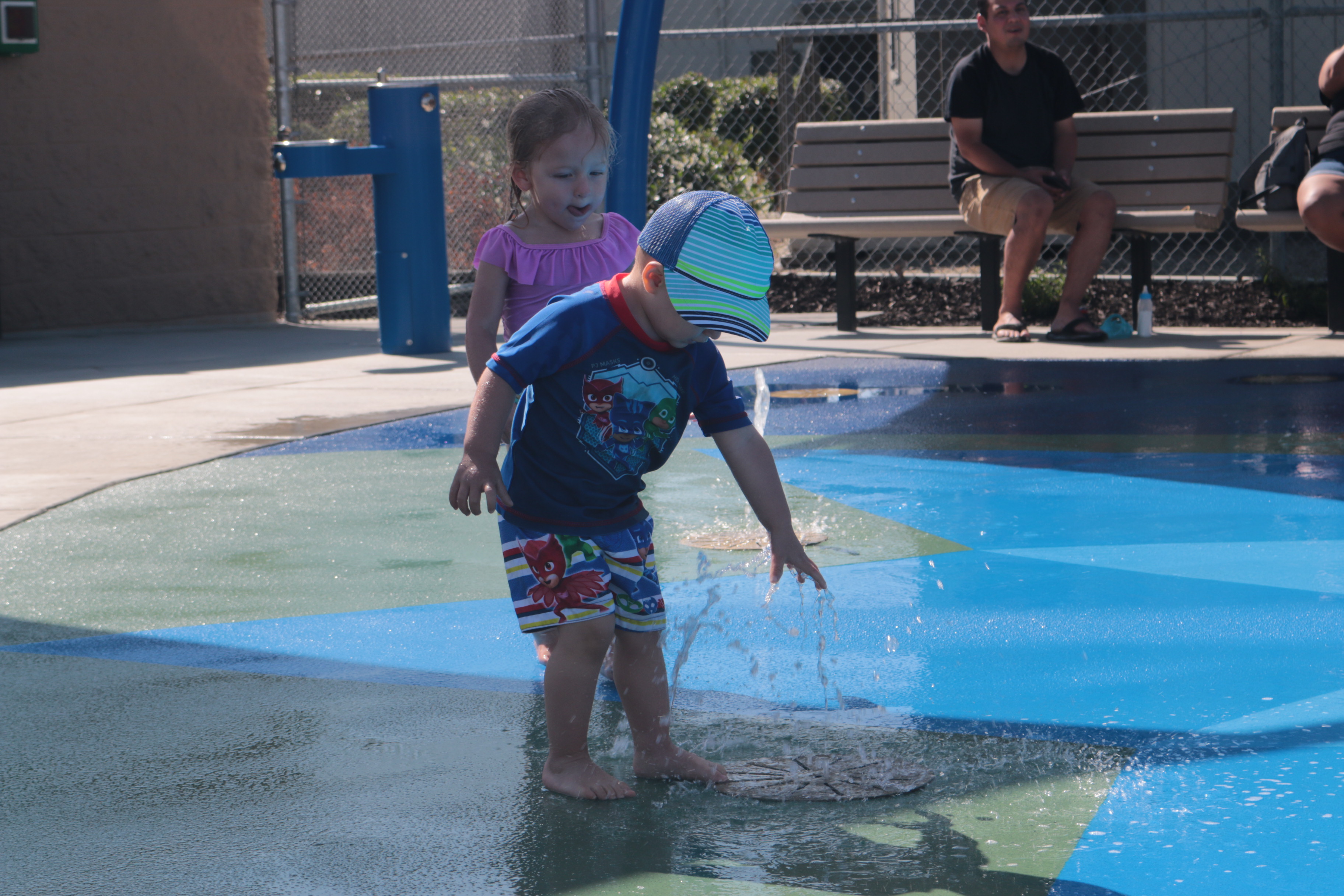 City applies for $16 million in grants to build more parks. 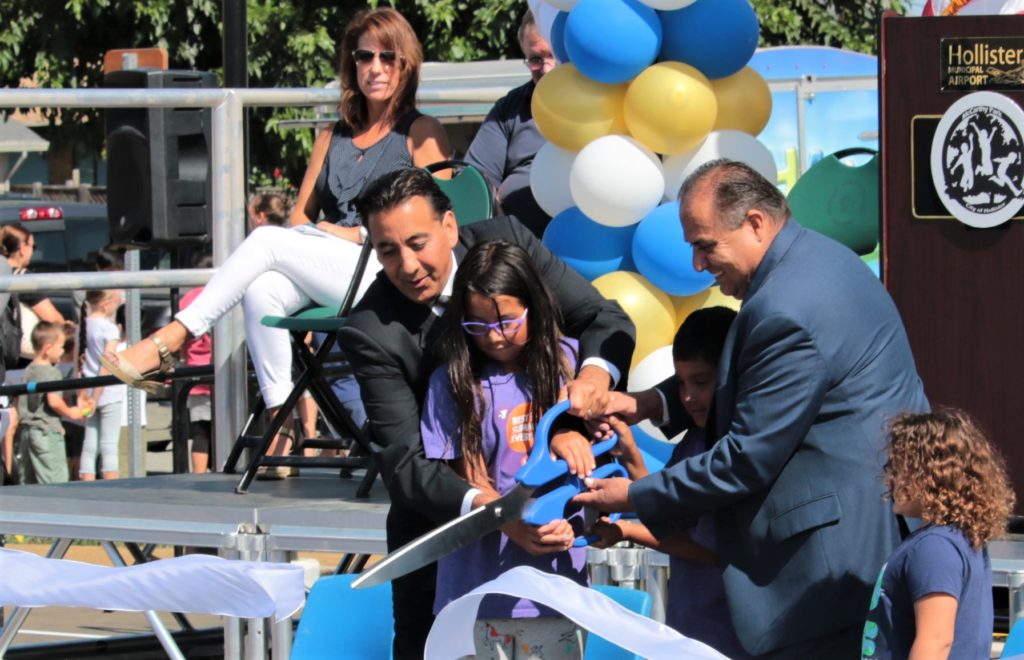 McCarthy Street Park officially opened on Aug. 8 at 10 a.m. At a cost $2.9 million, the newly renovated park next to San Andreas Continuation High School was crowded with families, city workers and local politicians for the ribbon cutting.

Hollister City Councilwoman Honor Spencer took up the challenge to toss a basketball on the new court donated by the Live Like Geno Foundation.

“This is the most gorgeous park I’ve seen,” Spencer said at the ribbon cutting. I’m so proud our City Council and county supervisors had the foresight to approve this.”

Spencer addressed comments on Facebook critical of the $2.9 million being spent on a park rather than city streets.

“Our kids have no place to go,” she said. “They’re riding their bikes down the streets; they’re riding their bikes in Target. If people would come down here and look at it and see there’s basketball courts, there’s the water feature, you can barbecue, have picnics, and you can lay on the grass and watch the stars. We need places for our community to gather. Whatever a family wants to do, they can come here and do it.”

City Management Services Director Mike Chambless said there have been a few electrical glitches at the park, but overall everything is going as planned. Having overseen the rebirth of a park that was all but dead ground before, he is already moving on to other park projects.

“On Monday, we submitted for two state grants, each for $8 million,” Chambless said, adding that the grants will come from Prop. 68 monies. “One is to develop the vacant lot next to Fire Station 2 [Union Road and Airline Highway] and one to develop the Leatherback property [Hillcrest Road and McCray Street] into parks.”

Chambless said even though there were hopes that the Leatherback property would be the site for numerous projects ranging from a college campus to a train depot, he was given the green light to apply for the grants.

As Mayor Ignacio Velazquez jokingly challenged San Benito County Supervisor Jaime De La Cruz to a one-on-one basketball game, he told Benitolink that the city and county worked together to bring back the park, which he described as one of the worst in the city.

“It was being used by people who were doing donuts with their cars in it and completely destroying the park,” Velazquez said. “We wanted to do something that would bring families out to enjoy the facilities.”

Initially, Velazquez was not in favor of spending more than $2 million on a park, but he said he recognized that parks are critical to communities. He said without parks, communities will fail.

“Families come out and they start supporting their community, which leads to a better city.”

In addition to applying for the $16 million in grants for two parks, Velazquez said the city and county continue to work together to develop a sports complex for baseball and soccer tournaments that would be located near San Benito High School. The hope, he said, is that it would attract teams from outside San Benito County to come to competitions and spend their money downtown. In addition, Velazquez said there are plans to build a large gymnasium that would have up to eight courts for basketball and volleyball tournaments.

Tina Garza, recreation supervisor for the city, said she was excited to be able to show the community what’s possible when funding is made available. She said the recreation department is planning to move the Movies Under the Stars event to McCarthy Street Park, as well as concerts and festivals to attract families. She said the park is being regularly maintained and city crews have already had to paint over graffiti.

“Just by having events here will help keep the bad behavior away,” Garza said.

During his comments just before the ribbon cutting, Supervisor De La Cruz said it was up to the surrounding community to volunteer and claim the park as their own in order to protect it and keep it from being tagged. He told the crowd that he lives nearby and his grandkids are already coming to the park. He spoke of the long effort to bring the park back after years of neglect brought on by the 2008 recession and years of drought.

“I usually say the State of California is no friend of San Benito County, but this time I have to say they helped us out,” he said. “We got a grant of about $100,000 and we built a little playground, but it wasn’t enough. I heard from parents ‘we needed a big park in our community.’ I told the mayor we need a good park, not just a playground and I’ve got to commend the City Council at that time, Councilmembers Mickie Luna, Ray Friend, Karson Klauer, Jim Gillio and the mayor, who were able to get a [$750,000] grant.”

After publicly recognizing Chambless for his work on a number of parks throughout the city, Velazquez and De La Cruz joined four YMCA youngsters to cut the ribbon, officially opening the park already overflowing with families.