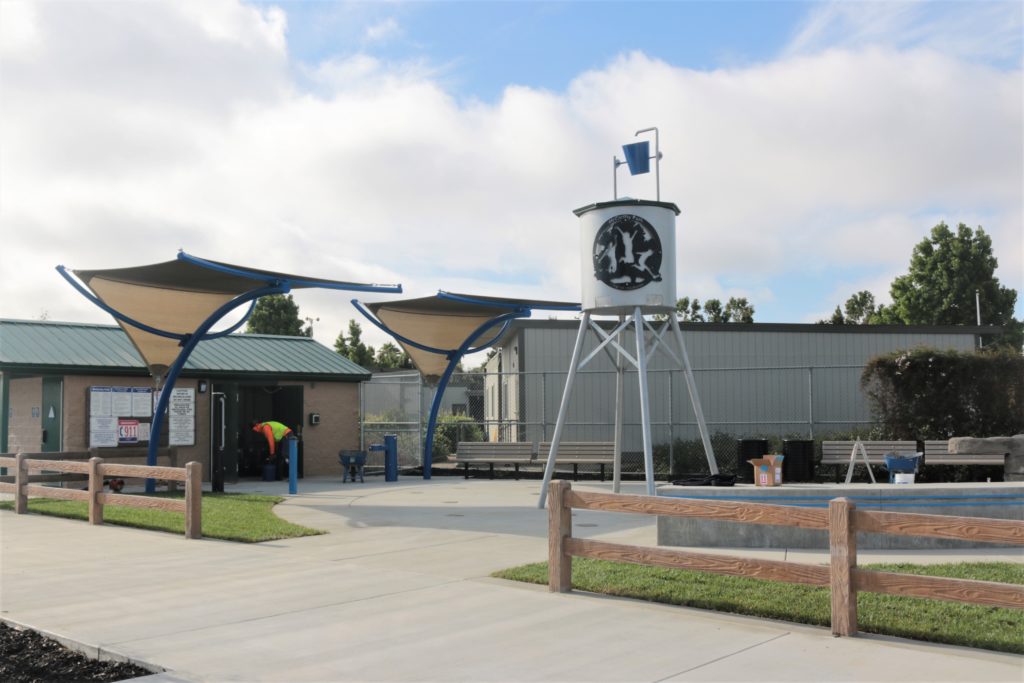 The water tower at McCarthy Park has a 90-gallon bucket inside and is surrounded by synchronized water jets and waterfalls. Photo by John Chadwell.
×

When the renewed and rebranded McCarthy Park opens in early August, it will not only be the most popular park in Hollister, but will most likely attract families from outside the city because of its uniqueness, according to City Management Services Director Mike Chambless. The park, which is being refurbished at a cost of $2.9 million, is located between McCarthy Street, Alvarado Street and South Chappell Road next to San Andreas Continuation School.

In particular, what Chambless thinks will bring families to the park is the new $1.4 million water feature. Compared to the family-friendly Valley View Park, better known as the whale park for its skeletal whale-inspired sprinkler system that is a welcome respite for families on hotter days, the McCarthy Park water tank feature is comparable to one found at larger theme parks, though somewhat downscaled and at a fraction of the cost.

Chambless pointed out that the bulk of the cost is in the restrooms, plumbing and a pump house. There are eight water pumps, an industrial sized ultraviolet filter, and a control system that will recycle some 5,000 gallons of water through a maze of pipes, synchronized water jets and waterfalls. Water in the tower will cascade down from a 90-gallon bucket to the splash pad. Chambless described the system as basically a swimming pool without the pool.

Everything was supposed to be completed by June 26, but a glitch postponed the grand opening until at least early August, he said.

“We’re probably about 95% complete,” Chambless told BenitoLink on July 4, as city workers added touchup paint to some of the features. “We’re waiting for the splash pad guy to arrive. He ran into trouble on another job in Georgia, and he’s now scheduled to be here next Monday. It’ll probably take a week to put down and has a week cure time, and then the health department has to come out to certify it, which is the last piece.”

When the completely American with Disabilities Act-accessible park does open, what will eventually be a large grassy area in the center with walking paths will be fenced off because it was recently seeded. Chambless said it will most likely be the end of the year before it accommodates heavy foot traffic and games.

The revitalization of the much-neglected McCarthy Park has been a long time coming. Chambless said there was a grant in the 1970s to build the park that consisted of a playground, basketball court and grass. Around 2008, he said the Hollister City Council made the decision to remove the grass because by that time the irrigation system had deteriorated. He said the plan was to rip everything up and reinstall the irrigation system and grass. When the time came to do so, nature and the state stopped it.

“My direction was to install the turf and I proceeded to do that, but ran into the drought and the state [water] moratorium,” he said. “This place remained fallow for almost seven years, and then we had an opportunity to apply for a $700,000 state grant about two years ago. Then the council budgeted $2.4 million in park development fee money out of the park development account.”

There will be a grand opening in August, though the Hollister Recreation Department doesn’t yet have a date and time.

“I’m sorry it took this long,” Chambless said. “This was an incredible opportunity for us because we have additional parking with a reciprocal parking agreement and we have food nearby. We might have overbuilt this park a little bit for a neighborhood park, but did so only because the surrounding assets where there to support it.”