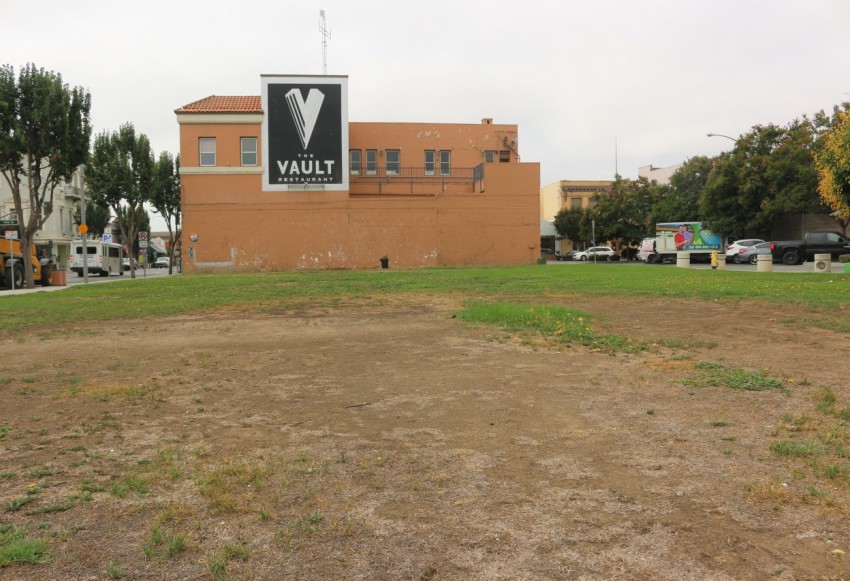 The 400 block at the corner of Fourth Street and San Benito Street. The Vault building, owned by Mayor Ignacio Velazquez, sits in the background. Photo by John Chadwell. The Hollister Planning Commission unanimously approved an architectural design for the controversial 400 block project during its Sept. 27 meeting. Two buildings—a new Community Foundation for San Benito County headquarters and a multi-story, mixed-use commercial/residential structure—are planned to occupy the lawn area at the corner of Fourth and San Benito streets.

Councilmember Jim Gillio said during a September 2017 meeting that the block is owned by eight regional agencies, including Hazel Hawkins Memorial Hospital, Gavilan College and the county itself. The agencies are expected to receive a portion of revenue from the sale of the 400 block. In addition, the state mandated the land to be sold in accordance with the Dissolution Act of 2011, regardless of whether it was going to be developed.

The three-story building, set on the corner, is planned to have six commercial units, a restaurant and a lobby on the first floor, according to a presentation given during the Planning Commission meeting. The second and third floors are expected to offer nine one-bedroom, one-bathroom residential units and two studio units. Planning Manager Abraham Prado said the price for the units is still unknown.

A 2,000-square-feet open area is planned for the rooftop with multiple tables, chairs, trees in planters and a barbeque area.

The Community Foundation building is expected to have an open area leading to four offices, a break room, storage room, large meeting room, electrical room, restrooms and a patio area that connects to the Briggs Building parking structure. An office area, break room, copy room, future expansion room and two restrooms are planned for the second floor of the nonprofit’s new headquarters.

It wasn’t long before a confrontation ensued during the public comment period.

Hollister Mayor Ignacio Velazquez said he had concerns about commissioners having conflicts of interest.

“Miss [Pauline] Valdivia with the city funding some of your programs… Miss [Carol] Lenoir your application for a City Council member pointed out that you wanted to be a councilmember to make the right decision on the 400 block, which kind of says you already have an opinion on that,” Velazquez said.

Planning Commission Chairwoman Lenoir quickly responded that she never stated an opinion because she stays out of all that.

“Don’t tell me I have a conflict,” she said.

After Velazquez said he was just pointing it out, Lenoir replied, “Don’t point it out because it’s not true.”

Over the years, Velazquez, owner of the Vault building on the same block, has repeatedly voiced his opposition to developing the 400 block. Over the summer he gathered residents’ signatures to petition the city to stop the development plan and allow residents to vote on it.

Elia Salinas, candidate for Hollister City Council District 3, said she was originally against developing the 400 block.

But Salinas also said she thought it was ironic that Velazquez made efforts years ago to develop that property and now he is against it. She added that the mayor has had several opportunities to do so but didn’t and questioned whether he was bitter because now it’s happening.

“I find it offensive that he is trying to say that the people would have voted for it,” Salinas said. “He had the opportunity. They went out there. They got the signatures. The Attorney General of the State of California said it couldn’t happen, it wasn’t going to happen. So he’s had his opportunity.”

Attorney General Xavier Becerra said on April 27 the resolution to sell the property for development was not subject to referendum.

Velazquez said early on the city tried to build an “anchor” to downtown based on consultant suggestions, and the ideas that the city explored  included an art center, theater and a hotel. He said a deal was never struck because a shopping center was ultimately decided upon.

Gordon Machado, who is campaigning for mayor against Velazquez, was among those in the audience who spoke in favor of the project.

Machado said the grassy area in the 400 block is not appropriate for a park, even though it has been used for Movies in the Park and other activities, unless it is completely modified to ensure the safety for children.

Anne Hall was another resident who voiced approval of the 400 block project.

“I’m really happy to see that it’s going to be developed,” said Hall, principal engineer at San Benito Engineering & Surveying, Inc. “There hasn’t been much going on there and I’m here all the time, so I know that.”

On Oct. 17, 1989 at 5:04 p.m the 7.1 magnitude-Loma Prieta earthquake caused an estimated $100 million worth of damage in San Benito County. Buildings collapsed or were demolished because of severe damage from the quake, which is why the empty lot exists downtown.

Before approving the design at the Sept. 27 meeting, planning commissioners echoed a message of satisfaction about the potential mixed-use building and increase in foot traffic downtown.

Lenoir said the project will give young couples affordable housing as well as multiple areas for people to gather and socialize. Valdivia focused on viewing change in a positive light and said it is something future generations will enjoy.

Mayor Velazquez called the decision disappointing and “short-sighted” after the commission approved the design.

“It’s going to prove to be a financial hit to the entire downtown,” Velazquez said. “We are never going to have the ability to bring the foot traffic that we want to make a successful downtown.”

Other BenitoLink articles related to the 400 block (in chronological order):