San Benito County supervisors will vote on whether to proceed if Newport Pacific Land Co. continues with its application. 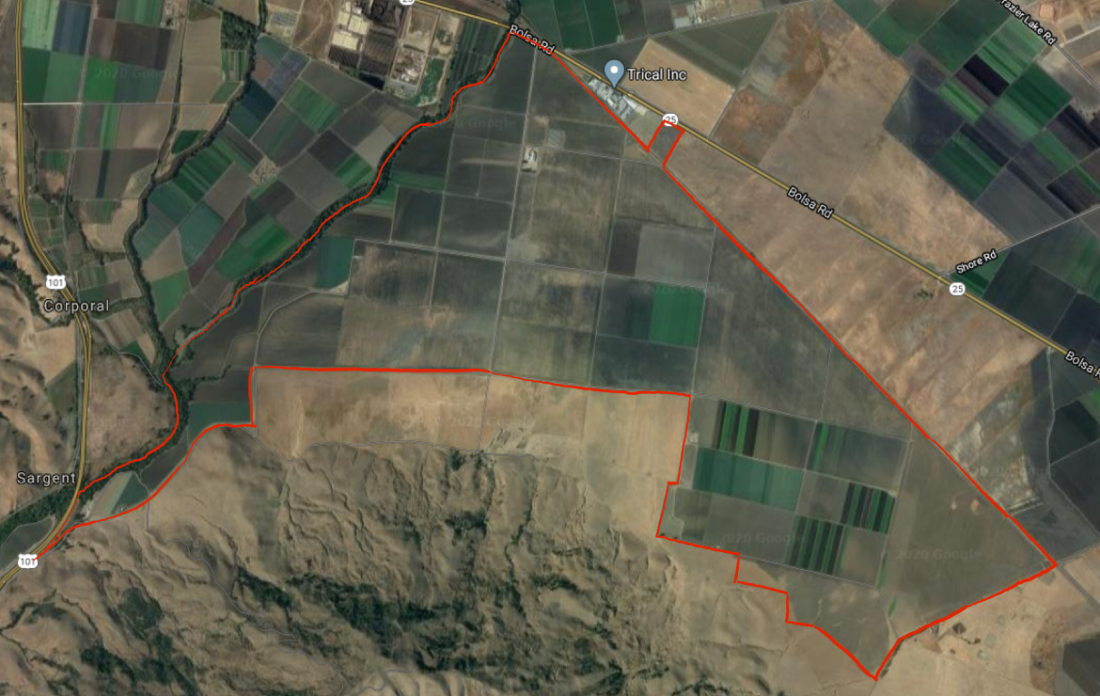 Within the next two weeks, developers of the Strada Verde Innovation Park are expected to decide whether or not to move forward with its project application. That’s according to Scott Fuller, Strada Verde spokesman, who spoke at the Feb. 23 San Benito County Board of Supervisors meeting.

“We have been analyzing and evaluating our options as to going forward,” Fuller said. “I know it’s uncomfortable to have it hanging out there with an undetermined date, so let me say today that we will make a decision about that within the next two weeks.”

Fuller said if the developer, Newport Pacific Land Company LLC, decides to move forward with the project application originally submitted in May 2019, he would like the county to not put any extraordinary measures into processing it, and that it should be treated as any other application the county has handled.

The proposed Strada Verde project near Highways 25 and 101 along the Pajaro River would be set on 2,777 acres, including open land with a 2.4-mile trail; a business center with a hotel, retail shops and restaurants; and an automotive technology and research center with automobile testing tracks.

Newport Pacific submitted the project for voter approval in an initiative, Measure N, which was defeated on Nov. 3 with 59.5% of the vote. Despite that, development could still move forward through the normal permitting process.

Resource Management Agency director Benny Young said after the election the developers asked the county to suspend its processing of the application.

The Strada Verde project was agendized for the Feb. 23 board meeting at the request of Supervisor Kollin Kosmicki, who voiced his opposition to Measure N during his election campaign. At the meeting, he recommended the board agendize the project and formally deny the application.

“All five districts overwhelmingly said no to changing that property to a commercial area from agriculture,” Kosmicki said. “Now it was a particular project on the table, but I think our public spoke loud and clear during the election. No matter where one stood on Measure N, in the end it’s our responsibility to hear the public’s wishes.”

He also recommended the board agendize a separate item to analyze and set a buffer zone policy around Trical, Inc., an agricultural chemical distributor on Highway 25 next to the proposed project area. The county commissioned a hazard report and two subsequent peer reviews on Strada Verde’s proximity to Trical prior to the Nov. 3 election.

Fuller’s announcement of the decision timeline caused the other four supervisors to direct staff to agendize the project in one month and either refer it to the Planning Commission for review or deny the application.

Supervisor Bob Tiffany, who supported Measure N as president of the San Benito County Business Council prior to being elected, said he wanted to wait for the applicant’s decision because they could amend the project and make it significantly different, and one which addressed the concerns of those who opposed it in 2020. Among those concerns are traffic, housing, the project’s proximity to Trical, and other environmental impacts.

Prior to the election, Newport Pacific Land Company said that Strada Verde would result in $10.6 million annual property tax revenue for the county; $11.7 million in sales tax; and another $2 million annually for unsecured tax revenue. Additionally, the developer estimated it would pay $41.5 million in impact fees and $9.9 million in use tax revenues.

At the meeting, six residents opposed the project, while a seventh said they supported analyzing the project if the applicant decides to move forward.