Notice of intent is still to be filed with the city. 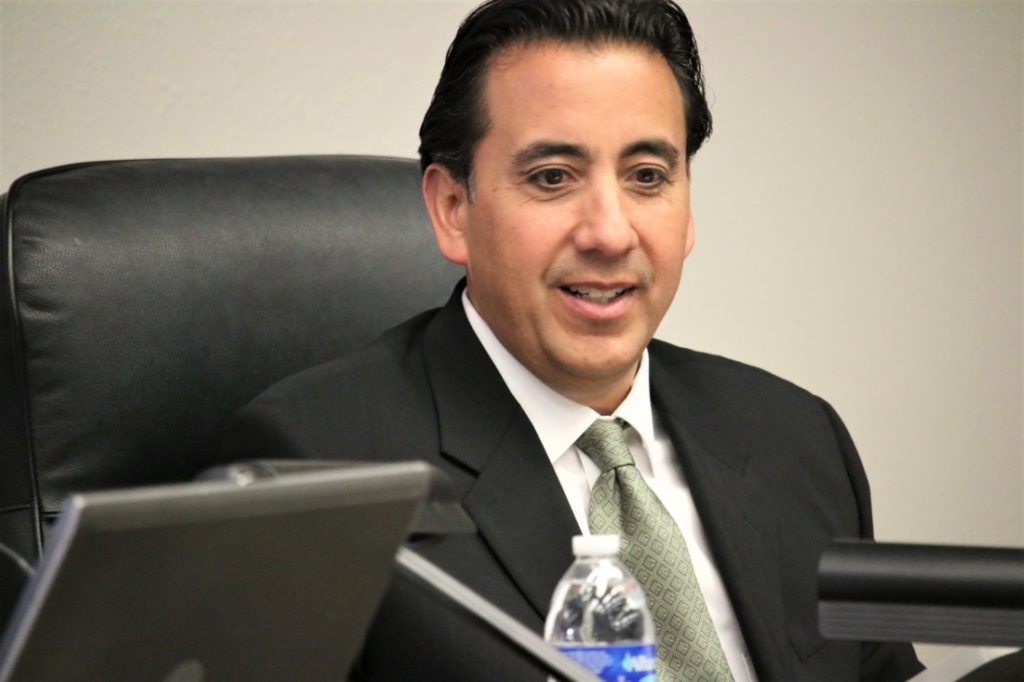 Celeste Toledo-Bocanegra launched a campaign in January to recall Hollister Mayor Ignacio Velazquez with a website and a GoFundMe page that has raised $1,030 as of April 15. According to the website the goal is to raise $20,000.

On the GoFundMe page, Toledo-Bocanegra claims that the “Recall Mayor Velazquez 2021 is a committee composed of Hollister residents who believe change is desperately needed at City Hall. Through his divisive rhetoric and conduct often targeting specific individuals in our city, Mayor Velazquez has created deep divisions within our community.”

Velazquez told BenitoLink the recall is another attempt by a group of mostly people who live in the county and not the city who are “anti-maskers, #OpenSBC and pro-growth advocates.” Their ultimate goal, he said, is to oust not only himself, but “every elected city and county politician, the district attorney, the sheriff, school board members, and anybody who believed COVID was real.”

In a video on the website, Toledo-Bocanegra claims the mayor’s “support for extreme pandemic lockdowns, unreasonable mask mandates and hostility to job creation has led to a massive attack on our struggling local businesses and individual rights. We need to replace Mayor Velazquez with a mayor truly interested in the well-being of our residents, our families, our local schools and our businesses.”

“These people have been harassing me for a while,” Velazquez responded. “The group includes Toledo-Bocanegra, Courtney Evans, Andrew Russo, Vedana Freitas, and San Benito County Supervisor Peter Hernandez.”

Freitas has also posted on her social media that Hernandez needed to be recalled.

“They believe that elections should be held three or four times or whatever number it takes to get the results they want,” Velazquez said. “I’m disappointed that Peter Hernandez would be involved in that. This same group of people think that COVID is a hoax and anybody stupid enough to wear a face cover should be removed from office.”

Hernandez denied that he was directly involved in the recall effort, but did say he supports it because he believes the mayor violated the U.S. Constitution by not allowing due process for individual businesses or engagement with the public in the implementation of local COVID-19 restrictions.

City Clerk Christine Black told BenitoLink the city did receive a “non-qualifying” notice, according to the California election code section 11020, of intention to circulate a recall petition against the mayor on March 31, and that “no response from the mayor is due until a qualified notice is received by the city.” Black did not indicate why the petition did not qualify and City Counsel Jason Epperson did not respond to BenitoLink as to why it did not qualify.

Toledo-Bocanegra told BenitoLink that the group is circulating the Notice of Intention to Recall to re-submit to the city clerk.

“Our first notice was rejected by the clerk without explanation, although we later determined that three voters neglected to include their zip codes,” she said. “Once we receive approval of our new notice and our actual recall petition, we will be moving forward with the campaign.”

Toledo-Bocanegra continued, “We would remind the mayor that he spearheaded numerous attempts to recall then-district attorney John Sarsfield about 15 years ago and each failed miserably. He was even accused of presenting bogus signatures. He is the last person to be lecturing on the complicated and often confusing process of initiating a recall.”

“This is deflection and it’s sad the mayor has taken that route,” Hernandez said. “Anybody who violates the Constitution should be challenged and I’m not opposed to it.”

Hernandez said local office holders handed over their authority to the state. He reasoned that while the Hollister City Council supported the shutdown of businesses and a mask mandate, the mayor had set himself up as the spokesman for the moves, so he is the one who violated the Constitution.

“Everything has been directed from the state and the local agencies supported it without even acknowledging due process and deprived the rights of the public,” he said. “There was a lack of due process and some kind of criminality is involved.”

On the recall website, Toledo-Bocanegra posted a video in which she states the reasons for the recall. She says the recall may take as long as six months and asked for donations. There is also a page to sign the petition.

It is not clear how much public support Toledo-Bocanegra has, but the comments about Velazquez attacking other councilmembers, the public, and even city staff on social media and in the city chambers has been reported by BenitoLink as far back as June 2017.

At one time, Velazquez and Councilman Rolan Resendiz accused two council members of colluding with developers. Now serving his fifth two-year term, he has been a consistent foe of developing the 400 block where he owns property, accusing both developers and supporters of the project and other city project developers of wrongdoing, mounting a petition drive against the 400 block project, and threatening the city with lawsuits.

Deadline passes for mayor to sue over 400 block development

Petition for referendum on 400 Block back on council’s agenda